From software to steel plating, Indiana-based TPG Marine Enterprises provides a range of services in the Great Lakes and inland waterways markets. River based tug and barge services are based in Jeffersonville and Mt. Vernon, IN, on the Ohio River, as well as on Kentucky’s Green River. The company also owns TPG Chicago Dry Dock, located on the Calumet River. Interestingly, the firm’s headquarters are located right in the middle: in landlocked Indianapolis. That’s because TPG has myriad interests in maritime software development, logistics and business development services for private businesses in the Midwest. Maybe that’s why TPG stands for “Transmodal Performance Group,” covering a broad brushstroke across the domestic waterfront.

TPG recently completed a project at its Calumet location that’s interesting on its own merit. In this case, the company literally cut an old dry dock in half, length-wise, and rebuilt it eight feet wider than it started in order to handle 30,000-barrel tanker-barges. For barge stakeholders operating within a 250-mile radius in either direction, the new infrastructure opens up a world of potentially time and money saving opportunities.

The rebuild project is of great interest to jumbo tank barge owners who operate in Midwest and Chicago markets. That’s because the new Calumet facility is the only one on the Illinois River system that can dry dock and service 300 x 54-foot, 30,000-barrel barges. Previously, those vessels had to get pushed or pulled for repairs and maintenance, to the south, almost to St. Louis, or 250 miles north, to Sturgeon Bay, WI. That’s not an easy move to either place – time consuming and expensive – particularly for a unit likely needing to be out of the water in the first place.

Edward L. Robinson, IV, is TPG’s Chief Marketing Officer, based in Indianapolis. The rehab project came about when a company that TPG has worked with over the years decided that its future business plans would shift away from dry dock services. (Robinson did not want to identify the company.) The dry dock that company owned at the time then sat unused. TPG stayed interested, and watchful. Robinson said when the owners finally decided to sell, TPG was ready to buy. “We didn’t just say yes,” Robinson recalled, “we said ‘heck yes!’”

The sale took place in December 2015. The dry dock was in pretty bad shape, although its equipment appeared sound. One big advantage: it was close, relatively easy to bring home. Robinson said the company was scouting other purchases but distance quickly becomes an issue; finding a dry dock in New Orleans, for example, even at the right price, presents significant logistics and transportation challenges when a company is located in Chicago.

Chicago Roots, Local Service
Chicago Dry Dock (CDD) has long had a presence in Chicago, at the Calumet River site. CDD covers about seven acres, has 1200 feet of sheeted wall, and is located about three river miles from Lake Michigan (15 miles or so south of the Loop). The company started operations in 1979, providing barge cleaning and repair services. Dry dock service was added in 1995. TPG bought CDD in 2014, changing the name to TPG Chicago Dry Dock.

When purchased, CDD had two floating dry docks which could accommodate repairs to vessels 262 feet long, 54 feet wide and up to 1500 tons. Work included tugs and tow boats, commercial tour and passenger vessels, pleasure boats and barges of all types, but of standard sizes. Unfortunately, CDD couldn’t service the 300-footers – frustrating because CDD staff, long familiar with regional and equipment markets, knew the demand was out there.

Mike Hogan is TPG’s General Manager at the Calumet River facility. “We knew the demand for service was there,” Hogan said. “People called me all the time asking me to dry dock the 300 footers. But I couldn’t do it.”

After the dry dock was purchased in December 2015, rehab work was put on hold, finally starting in June 2016. The first task was to install a new bottom, one half at a time. The work took place within one of CDD’s other dry docks. Most of the work was done by CDD’s crews, as time permitted.  Essentially, for CDD’s team, this is what they do – hands on work on big stuff; with this project, it was their own. The company employs a full-time staff of ABS (American Bureau of Shipping) certified welder-fabricators and technicians. That’s a skill set important to customers who likely want to know that their dry-docked vessel is within a structure that’s done right, one that has been properly assembled, or, in this case, cut up, taken apart, reengineered and then reassembled.

As work progressed and the new bottom was being finished Hogan said the question came up: “Why don’t we widen it?” Again, not easy, but a tempting idea hard to dismiss: a reconfiguration would jumbo-size the facility, making it big enough to handle the 300-footers. “By widening,” Hogan said, “we would have a capability that no one else has up here.”

Gearing Up
After their initial bottom work, Hogan said his team used rigging wire to keep the disassembled parts in a holding pattern. “Then,” he said, “We had to come up with a plan about how we were going to put it back together.” Their proposal: build a tank down the center, thereby widening the structure by eight feet. To do that meant they needed to cut the structure in half, length-wise.

For this, they needed outside help. Next steps included hiring a diver who cut the submerged side of the dry dock, along the underwater seam. Once that was finished, TPG crews got back at it, working from the top deck to cut the rest of the way through, keeping the two halves of the structure within a second CDD dry dock. Then, they had to fill the gap, had to stitch the two halves back together into something that actually worked.

CDD hired marine engineering firm Manley Brothers to develop a structural frame that would become the new middle. Then, working from those engineering drawings, TPG crews continued their rebuilding. It took about 14 months to stitch it back up, from the June 2016 start date, concluding in late summer, 2017. The project stayed on budget and on schedule. Hogan would not disclose total project cost but it was self-financed and did not include any MARAD or similar kinds of public loans or grants. Nor did it require any federal, state or local air, water or hazardous materials permits. There were no issues with storage tank removals or relocation. Old steel was recycled.

Open for Business
The newly configured dry dock opened for business in September 2017. He’s confident the new asset will pay off for CDD.

Where navigable waters are concerned, the company is in an enviable spot, both for barges and equipment from the inland water ways and Great Lakes commerce. That expanse includes areas stretching from Lake Michigan, the Calumet River and ship channel run south and west, joining the Des Plaines River, which joins the Kankakee River, which flows to the Illinois River, joining the Mississippi River near Grafton, IL, just north of St. Louis, MO.

Jumbo barges at the Chicago-end of the inland waterways system can now arrange service with CDD. Before that, those vessels, along with a tug and crew, would have to leave, again, likely heading south for service near St. Louis. For traffic from the Great Lakes side of CDD’s facility; nearby service can have inherent advantages. Sturgeon Bay is pleasant enough but it’s a long trip from Chicago.

Ed Robinson said CDD is “staying pretty busy with the new service. People are selecting to bring them (jumbo-barges) in.” He said if the company does a “dozen a year that’s a big plus for the industry, and for us.”

Robinson added that the third dry dock, even if it’s not in use for a jumbo-barge project, has served to augment and expand new service opportunities for CDD. The company is newly starting to use the dry docks in tandem, each one augmenting the role and placement of the other. Robinson said these tandem projects have opened up new flexibilities for CDD’s work. In other words: an investment with a payoff greater than the sum of its individual parts. That’s a good business outcome by any definition.


(As published in the May 2018 edition of Marine News) 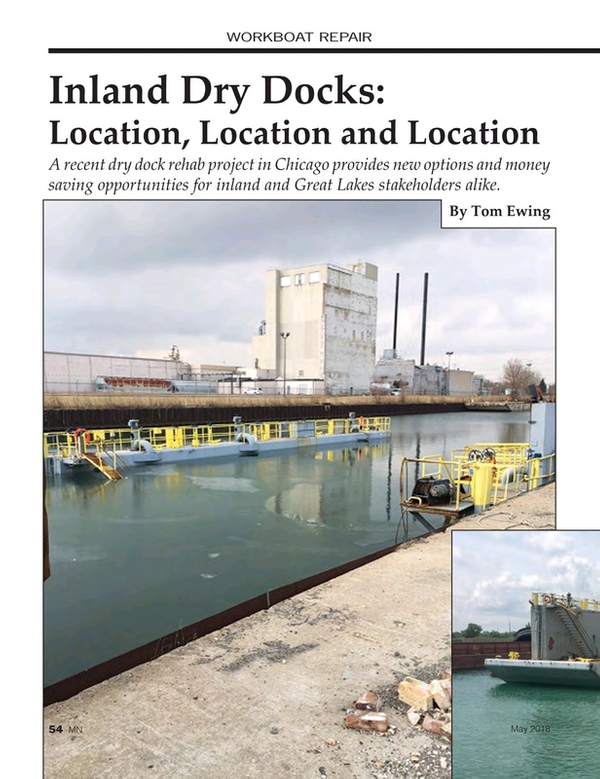