As the severity of the offshore energy downturn has increased and the likelihood of older vessels returning to work begins to diminish, owners have slowly come round to the importance of scrapping these vessels. According to VesselsValue, U.S. owners might be leading the way.

According to VesselsValue, an online valuation and market intelligence service for the maritime and offshore sectors, in this current period of downturn, critics of offshore shipowners will say that owners have been guilty of not scrapping older tonnage in order to maintain a young and advanced fleet. Though this is justified, rewind to pre-downturn, these debt free older vessels were able to get work on a fairly regular basis, and were a cash flow generator for owners.

The abrupt way in which the offshore party ended in 2014/15 meant that due to their aforementioned earning power, owners have many now idle old OSVs on their books. No one knew the downturn would be so severe, but analysts and market commenters were quick to point to the high number of these older vessels as one of the principle problems with the overall market.

During the first years of the downturn (2015-2016), owners resisted the calls to scrap, no doubt thinking of how these vessels were solid earners in previous years. However, as the severity of the downturn increased and the likelihood of these older vessels returning to work began to diminish, owners have slowly come round to the importance of scrapping these vessels.

Scrapping Accelerates
So far in 2018, a total of 43 OSV vessels have been sold for scrap. In the first three months of 2017 only 17 vessels were sold. This increase shows owners are biting the bullet and realizing that if they are to survive these poor market conditions, they need to think of the future market rather than the market of the past. Despite the low scrap value of old OSVs, owners are putting faith in the restructuring process and emerging a leaner entity on the other side. A prime example of this being Tidewater, who are unsurprisingly top of the scrapping leaderboard selling 13 vessels for scrap in 2018.

According to VesselsValue Offshore Analyst Charlie Hockless, U.S. companies are leading the way for the OSV market when it comes to restructuring. He explains, “Unlike in other operational areas in the global OSV space, companies are facing up to the debt they have with financiers. Using large USA offshore owners Tidewater and Gulfmark as an example, they tackled the bad market head on and both filed for Chapter 11 bankruptcy protection. This saw initial cutbacks and challenging internal decisions being made. The result of this is positive however, as they are now lean businesses ready for the market to recover. What is worrying is that we have not seen many other offshore entities taking the same action, ‘kicking the can’ down the road so to speak.”

Hockless adds, “What also concerns analysts and market commentators is the fact that the banks are the ones who need to cooperate with the shipowner in order for this process to occur, and it could be the case that they are preventing other shipowners from following Tidewater and Gulfmark.” Notably, though, and in early March, Louisiana-based Harvey Gulf International Marine LLC, which has more than 50 vessels in its fleet and supplies offshore oil rigs among other services, also filed for Chapter 11 bankruptcy in Houston.

Better News Ahead?
Separately, Norway-based DOF, an operator of 67 purpose-built offshore support vessels, sees the offshore supply vessel market improving. According to a Reuters report in mid-April, DOF’s chief executive said that the cost of chartering offshore supply vessels (OSVs) will continue to rise as many ships that were mothballed up during the downturn will not return to the market. With the number of OSV’s now being scrapped on the rise, he might just be right.

As oil prices plunged between 2014 and 2016, many offshore support firms were forced to merge with competitors as their oil company clients cut spending for exploration and drilling. Within the last twelve months, however, rates for hiring specialized vessels such as platform supply (PSV), diving support (DSV) and anchor-handling vessels (AHTS) have begun to recover.

The North Sea market has been leading the charge, with rates for some sectors climbing by as much as 30 percent from a year ago, but activity is showing signs of life in other regions, as well. “The rate levels for PSVs have increased quite a bit from low levels (last year) ... Now, at least, you can pay interest rates,” DOF’s Mons Aase told Reuters. Beyond this, his firm recently won a three-year contract from Petrobras for a diving support vessel (DSV) in South America.

Also according to Reuters, his optimism was based on the expectation that a majority of offshore supply vessels laid up in Europe will not return to the market. Aase added, “Many of those vessels parked in Europe came from Africa and Brazil, and they don’t meet the (European) specifications... We clearly see that a significant portion, about two-thirds, will not be back,”

Meanwhile, the Norwegian Shipowners’ Association puts the number of offshore supply vessels and drilling rigs in layup during 2017 at 183, or almost one-third of the Norwegian offshore fleet. But, that number had shrunk to 162 vessels by February of this year. And, there was more good news by the end of April.

Back on the U.S. side of the big pond, French oil major Total announced that it had acquired several assets in the Gulf of Mexico, as part of Cobalt International Energy’s bankruptcy auction sale. The deal, which was reported to have cost Total $300 million, involved a 20 percent stake in the North Platte asset. Once consummated, Total will control a 60 percent overall stake in North Platte, with Statoil holding the balance. Total will reportedly buy as many as 13 offshore Gulf of Mexico exploration blocks.

Statoil isn’t sitting on its hands, either. Already with interests in eight GoM producing fields and with two more in development, their production is eventually expected to reach 110,000 boe per day, making Statoil a top-five producer from the deepwater Gulf of Mexico. In a prepared statement, the Norway-based oil major said, “The portfolio will by 2020 achieve an average cash margin of at least $45 per barrel after tax at an oil price of $70.”

With the price of oil on the rise or at least holding steady in the face of expanding U.S. production and inventories, offshore support providers everywhere are hoping that the return to better market conditions is just around the corner. If so and when it does come, the latest scrapping figures suggest that there will be fewer vessels on the water to compete for available business.

(As published in the May 2015 edition of Marine News) 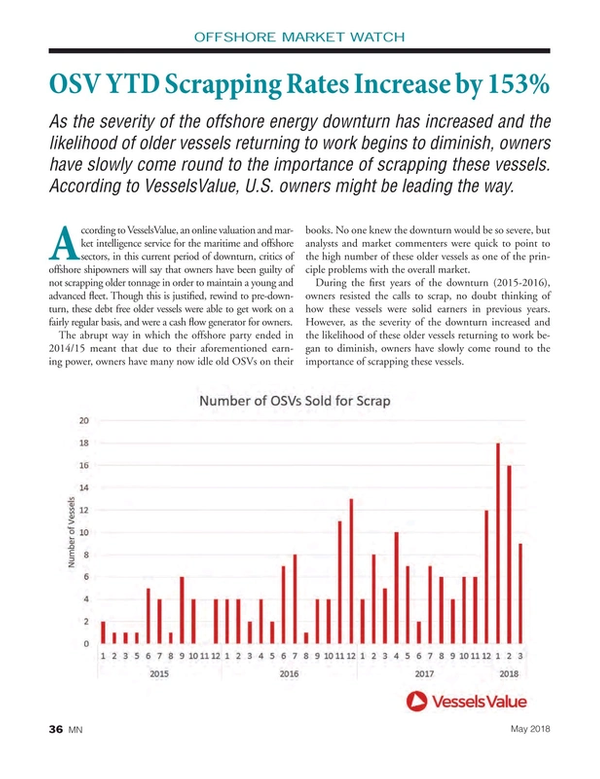 Read OSV Scrapping Rates Up 153% YTD in Pdf, Flash or Html5 edition of May 2018 Marine News