Op/Ed: The Mississippi River is Boiling!

U.S.-Flag dredgers answer the call in the Mississippi River Basin.

Greg Bush, President of The Federal Pilots of Louisiana, said, “The Mississippi River level started rising early this year and silted up the Southwest Pass in short order. The U.S-Flag dredging companies responded immediately with their dredgers and equipment and continue to do an excellent job clearing the sediment allowing ships and vessels to transit.”

The authorized depth for Southwest Pass is 45 feet. Early on this year, even before the spring season, the channel began showing signs of degradation. The channel depth for transit has been lowered to 42 feet and degraded channel conditions and draft restrictions have multiple impacts such as the increased potential for vessel groundings and accidents. There is also the potential for damage to the environment due to flooding; economic losses because ships would have to light-load their ships or transfer cargo to lightering operations.

Of note, USACE opened the Bonnet Carré Spillway in early March – only the 12th time in the spillway’s 87-year history. However, Sean Duffy, Executive Director of the Big River Coalition, points out, “That’s true, but the Bonnet Carré has been opened four times in the past 10 years.” Duffy continued, “Four openings over the last decade indicates the system is changing and I remain concerned about the increasing frequency of high river levels and related flood events. We appreciate the U.S. dredging industry’s help.” The Mississippi River crested just below the 17-feet flood stage at the Carrollton Gage in New Orleans on March 19, 2018. At the peak of this year’s opening, 183 of the river diversion structure’s 350 bays were opened.

According to USACE, the Bonnet Carré Spillway is located 28 miles above New Orleans and is a vital element of the multi-state Mississippi River and Tributaries (MR&T) System. Located on the east bank in St. Charles Parish, it can divert a portion of the river’s floodwaters via Lake Pontchartrain into the Gulf of Mexico, thus allowing high water to bypass New Orleans and other nearby river communities. The structure has a design capacity of 250,000 cubic feet per second (cfs), the equivalent of roughly 1.87 million gallons per second.

The Dredging Contractors of America and its member companies have kept in close contact with the Army Corps. USACE’s preventive and immediate actions to maintain operable navigation channels include routinely scheduled channel surveys, and close collaboration with industry stakeholders such as the U.S. Coast Guard and local Bar Pilots regarding the river’s condition and navigation aids.

Water levels on the Mississippi are receding, but the river remains at an elevated level and the U.S.-Flag dredges will remain in the Southwest Pass until their job is complete.

We put America first, it’s our duty as American Dredgers to make sure the Big River flows, commerce moves, and the environment is respected.

(As published in the May 2018 edition of Marine News) 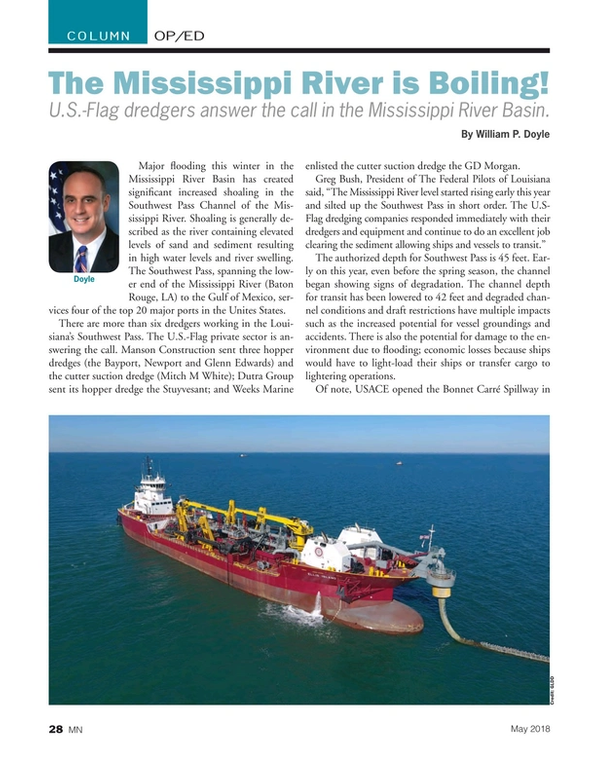 Read Op/Ed: The Mississippi River is Boiling! in Pdf, Flash or Html5 edition of May 2018 Marine News