An Unlikely and Remarkable Safety Journey

By Craig Philip and Paul Johnson

Late last year, the Transportation Research Board released a major study that was undertaken “in response to the rapid development of domestic sources of energy and questions about the safest ways to move these products.” The Study Committee examined the operational responses of the three primary modes impacted by the fracking revolution – rail, pipeline and maritime. A primary observation of this work was that that the “Marine Transportation System Offers a Model for Robust Safety Assurance….the challenge for the rail industry and regulators is to develop a safety assurance system that has a high degree of robustness like that of the maritime sector.”

The study was undertaken in 2016 in part as a result of the multiple, high consequence derailments of ethanol and crude oil in North America, as “crude-by-rail” volumes grew along with domestic crude production. The study also concluded that although the increase in barge movements of crude oil has not attracted as much public attention, the total volumes of oil transported by barge have exceeded those of rail. A possible reason for the lack of public attention is the exemplary safety record of this mode, which has had no reports of significant ethanol releases from tank barges during the past 10 years and only rare reports of unintended releases of crude oil. The comparative statistics tell the story.

This remarkable record and the story of the maritime industry’s successful safety journey is, both in absolute terms and especially when compared with the other modes, underappreciated even by those who’ve lived it for much of our careers. The research team at Vanderbilt is focused on infrastructure sustainability and resilience, which includes a focus on how transport systems respond to external shocks like extreme weather or abrupt and unanticipated changes in demand. Our work across modes and systems shows that it is factors related to Institutional Resilience that explains the remarkable safety record of the domestic maritime industry and it is through this lens that the big picture is better understood.

Catastrophes: Robust Safety Governance Models Emerge
Four extreme events more than 25 years ago, occurring in rapid succession over just five years, exposed system operational and safety vulnerabilities. I don’t think anyone could have foreseen that a key result would be a unique and effective safety governance model which was so prominently demonstrated during the wholly unforeseen growth of domestic crude oil production. These events can be described, as follows:

• 1988 Drought: Creation of RIETF
The 1988 Midwest Drought brought record low water levels to the Mississippi and Ohio Rivers. Operations were disrupted first on the lower reaches of the Ohio River above the confluence with the Mississippi River at Cairo, Illinois. The disruption continued through July and extended on the Mississippi River north to St. Louis and to New Orleans. For various periods, traffic on this densest section of the inland waterways became impassible, and numerous barges were stranded above and below the closed or restricted sections.

During this event, response was led and coordinated by various Coast Guard Captains of the Port (COTP), first at Paducah, Kentucky, where operational safety zones, tow size and HP restrictions, and one-way traffic zones were established to prevent groundings. By mid-June, various sections of the river were closed to navigation and attempted coordination with the Corps’ dredging resources intensified. This pattern of locally directed actions continued through the summer and extended to additional COTP zones on the Mississippi River

As the summer wore on, this locally directed approach to response simply became overwhelmed by the system wide impacts. Leaders of the towing industry felt that the government could respond more effectively if it had the assistance of a senior level industry group during the planning of waterway management activities leading to the formation of the River Industry Executive Task Force (RIETF). RIETF’s membership included senior representatives from the major barge lines, senior USACE personnel and the Commander, Second Coast Guard District.

The RIETF group became proactive during the balance of the low water event in 1988, along with the Lower Mississippi River Committee (LOMRC) focused especially on the river between Memphis and New Orleans. On balance, the stakeholders felt that all were caught off guard by the severity of the draught and that the formation of these two groups was one of the greatest benefits resulting from the low water event.

• 1989 Exxon Valdez Grounding: Oil Pollution Act of 1990
Less than a year after record floods in the heartland, the maritime world was shaken by the grounding of the Exxon Valdez on Bligh Reef in Alaska. The resulting oil spill and many challenges associated with the response quickly led to the passage of the Oil Pollution Act of 1990. It is hard to overstate the impact of this legislation on both the Coast Guard and the maritime industry. The act gave the Coast Guard its single largest legislative tasking in history.

OPA90 was centrally focused on liability and equipment – for example the phase-out of single skin tankers and barges. It also led to new mandated safety programs focused on inspection of systems and machinery and could have turned the regulator/regulated relationships wholly adversarial. However, the incident also drew renewed attention to the importance of the human factors and out of this came the “Prevention Through People (PTP)” program, guided by USCG VADM James Card. The concept came to life through the formation of a Quality Action Team with AWO that emphasized their shared goals – to improve marine safety and stewardship – using a cooperative non-regulatory approach driven by data and focused on results. In 1995, the Coast Guard and AWO signed a memorandum of Understanding to formalize the Safety Partnership, the first undertaken by the Coast Guard with an industry group. It has been a model for other partnerships and continues to be a vibrant and vigorous collaboration to this day.

• 1993 Amtrak Sunset Limited: the journey towards Towing Vessel Inspection
Just as OPA 90 triggered a response from the Coast Guard, another incident just a few years later galvanized the U.S. Domestic tugboat and barge operators to focus new attention on safety and governmental collaboration. The tragic collision in the fog by a tugboat near Mobile with the span of a railroad bridge led to the derailment of Amtrak’s Sunset Limited and dozens of fatalities.

The industry had long labored under the label of “uninspected”; an odd and many would say wholly unintentional consequence of legislative actions as diesel-powered vessels replaced steam. While the industry was “regulated” on many levels, it sought to protect and retain this “uninspected” status as it perceived a tangible economic benefit. Following this accident, the call for legislative action was fierce, and while a move to cover the industry by the inspection regime already applied to many other vessels was avoided, new regulations were directed by Congress, and further oversight of industry safety practices became inevitable.

The result was an industry consensus to establish an industry defined safety regime known as the Responsible Carrier Program (RCP). The program was launched in 1994 by AWO for its members and was an audited safety management system that ultimately became a membership requirement. Ultimately the industry concluded that it would be well served to advocate for new legislation to establish a Coast Guard Administered program of inspection, and legislation to accomplish this was passed by Congress in 2004.

While the journey toward implementation of vessel inspection – now called SubChapter M – as been far longer than any would have imagined, it has firmly embraced the framework of Safety Management Systems (SMS) as the foundation for the safety assurance focus required by Coast Guard inspections.

• 1993 Floods: The Emergence and Adoption of Waterway Action Plans
The Great Flood of 1993 was one of the most disastrous natural events in recorded history to impact the Midwest, claiming over 50 lives, totaling $14 billion in damages, and costing the maritime industry alone over $200 million.

Just as the draught in 1988 created a widespread and systemic crisis, the Mississippi River Basin flooding in the spring and summer of 1993 pushed the commercial navigation stakeholders beyond the effectiveness of the historic tools which were better served to deal with episodic and localized events. It began in the spring, which typically is characterized by high water along the Mississippi and its tributaries, but continued all the way through August.

During the draught of 1988 when the major constraint involved limited channel depth and the allowable draft of barges required to resume operations, a major issue related to the widespread flood conditions was a concern for the condition and deterioration of earthen levees, where the high water either overtopped or came close to doing so. The decisions concerning the resumption of commercial operations when safe from a navigational perspective thus also included other stakeholders such as local levee boards and municipalities that could be affected by levee breaches.

The new stakeholder groups such as RIETF clearly played an important part in helping the stakeholders respond as the geographical extent and duration of the high water event exceeded anything seen in the modern era. Nonetheless, the response was reactive and focused on individual local areas (Coast Guard Captain of the Port Zones, Corps Districts) without a template or playbook to guide stakeholders.

In the aftermath of these events in the 1990s, the Corps, Coast Guard, and industry created contingency plans specific to local operational territories and included two umbrella plans: The Mississippi River Crisis Action Plan and the Ohio River Valley Waterways Management Plan. The plans were tested during the high water crisis in 2005, and further refinements followed including the codification of a system-wide Waterway Action Plan (WAP) in 2007 built around local but coordinated contingency plans.

The Future: Developing a Robust and Resilient Governance Model
While the emergence of Sub M has been the most visible and controversial feature of the unfolding safety system today, it is the non-regulatory elements reflected in the activities of groups like RIETF that support a robust ongoing system safety management process reflected in the use of the Waterway Action Plans to guide industry and governmental activities:

Despite the external forces – especially the chronic and widespread impact of frequent extreme weather events and perpetually underfunded USACE budgets – the system has performed well in its primary mission to safely handle hundreds of million tons of cargo to support the nation’s economy.

(As published in the May 2018 edition of Marine News) 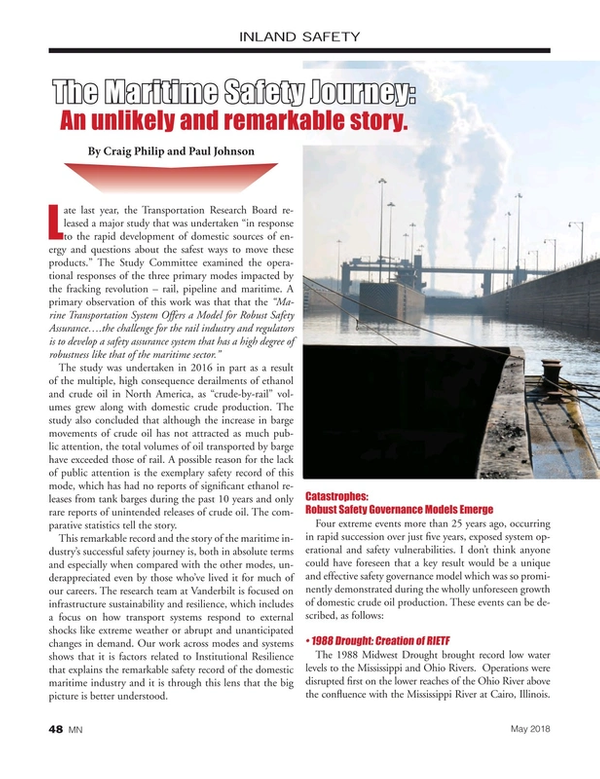 Read An Unlikely and Remarkable Safety Journey in Pdf, Flash or Html5 edition of May 2018 Marine News