“I just can’t believe that 70 percent of the world’s surface is underwater, but it remains almost entirely unexplored. We offer a solution that could make a huge difference to underwater survey, exploration and research. By using hundreds or even thousands of our low-cost underwater robots, we can intelligently explore these hidden depths more easily now than ever before,” said Andrew Durrant, Founder of PicSea, a new design concept for a small autonomous underwater vehicle (AUV) with a big mission.

Eight years ago, Durrant came up with an idea of producing small, low-cost robots that could not only intelligently enter unexplored areas of our planet but also open the technology to communities who could never access it before. “Back then I was a researcher at CSIRO working on habitat classification using their AUV. They were already working on what they thought at the time was a low-cost AUV, and this gave me the idea to go even further: I could make an AUV that was even more low-cost and more usable. I got a job at the University of Sydney for five years designing, maintaining, and deploying underwater robots and processing the data for clients. I was able to identify the things that make it difficult and expensive to collect underwater data. Because of those experiences, and almost a decade later, I now have a solution.”

After working in underwater robotics, imaging, photogrammetry, data processing and logistics, Durrant created PicSea – a new design concept for an underwater robot that collects data at a fraction of the cost of other AUVs. Through PicSea, Durrant aims to make underwater data more accessible to those within the scientific community that lack access to large budgets or advanced technological resources.

Durrant said, “There’s a very limited subset of people who not only want ocean data but can afford access to AUV technology. For example, I know a group of biologists who want to carry out lots of environmental surveys using AUVs, but their budgets just don’t allow for it. This sort of thing is widespread across the scientific community, and it’s something I am hoping to change with the PicSea concept. Our groundbreaking technology has dramatically reduced the cost and complexity of creating autonomous underwater vehicles.”

Swarms of these new low-cost PicSea robots – deployed in hundreds or thousands – will communicate with each other and intelligently complete tasks such as seafloor surveys with capabilities beyond what is available today, said Durrant.

“It’s not the first micro-robot concept out there, and the others are excellent tools, but we have a ‘magic’ source that delivers innovative navigation and communications systems which isn’t part of anyone else’s design. Each of these small robots will have their own role to play in the future of ocean exploration and discovery; it’s the way the industry is moving. For example, the other micro-AUVs are mostly designed more for water column sampling, but PicSea specializes in seabed mapping. We have a unique way to navigate, and the design of the vehicle is very different to anything that exists. That means they are mass manufacturable in a way that is very low-cost. We are one-of-a-kind.”

Durrant’s concept will enable him to produce robots the size of a briefcase, that can work on their own or in coordinated groups, without the need for the constant monitoring or expensive insurance required by other vehicles. The PicSea’s will have a payload that can include cameras for photogrammetry, laser scanners, and multibeam or side scan sonars as well as oceanographic sensors. The design allows custom versions to easily be manufactured for specific use cases and users will have several deployment options including from a ship, airplane, helicopter, aerial drone, or unmanned surface vessel (USV).

By using PicSea, Durant believes inspection tasks such as pipeline, seafloor asset, and offshore wind scour surveys can be completed accurately, much faster and at a fraction of the cost. In environmental monitoring, whole areas can be surveyed in high detail instead of interpretations from transects, paving the way for protection, exploration, and discovery.

The autonomy of the system as a whole will allow surveys to be planned, executed and the data collected remotely, and the swarm to adapt to changing conditions while on a mission. This enables the AUVs to be permanently installed in a location or take advantage of ocean currents and solar recharging to operate perpetually.

“I’ve spent the last year making sure that the technology that was needed to make this happen is possible. I’ve developed the propulsion, communications, and navigation systems and we are working with customers to understand the kind of data that they want. We’ve had a great response from all different sectors, and we expect to have something in the water by June 2018,” explains Durrant.

The Time for Ocean Start-Ups
The recent surge in underwater robotics has clearly demonstrated to both the industry and scientific communities how automation can be used in the data collection process. In the last few years alone, the industry is shifting from larger slow-adopting organizations to small innovative start-ups taking advantage of the latest trends in miniaturization and the relatively low-cost entry into the market.

“If I were trying to do this five years ago, it would have been a lot more difficult, and that is probably why more start-ups are entering our market now. There is 3D printing, satellite technology, battery technology and miniaturization on these elements that means in the short-term future it’s going to be much easier to collect ocean data and to mass produce affordable underwater robots to complete all sorts of complex tasks. It’ll be very disruptive to the industry in general. A sea of robots; this is how the industry is going to look.”

Since launching PicSea, Durrant has found that the companies ready to embrace this dawning era of ocean autonomy are also eager to engage with start-ups like PicSea and see what new services they can bring to the industry. While more and more companies are entering the market with novel technologies and innovative ideas, independent start-ups still need more support from the industry in the form of small grants or access to facilities.

Durrant said, “It is difficult being a start-up in this industry. After working in a fully equipped institute, one of the biggest challenges for me was starting my own laboratory and having to make do with whatever I could assemble myself. There are grants and support, but a lot of that gets eaten up by larger institutions, and addressing this gap should be a priority for funders. It is an exciting time for ocean exploration, and I’m looking forward to the day when we have a much better understanding of the ocean and how to use their resources sustainably. Start-up’s and embracing new technological concepts will be a big part of that. Further down the line, my dream for PicSea is to create a Google Maps underwater, but for now, it’s about promoting diverse solutions and getting more people to ask themselves how do we collect ocean data and make it faster, lower cost and less risky? PicSea is the answer.” 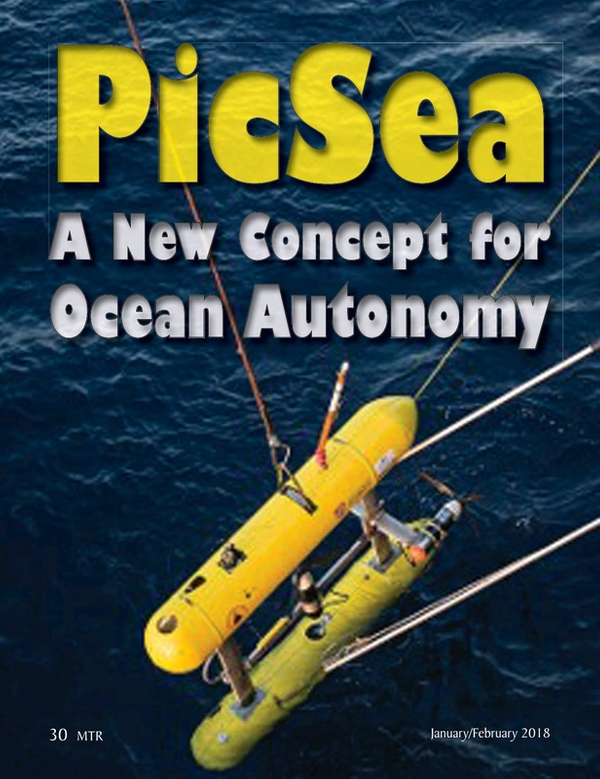