In 2009 I wrote a thesis on the use of unmanned systems for defense applications. At that time, the three buzz words of “dull, dirty and dangerous” dominated the narrative about what they are used for. Those words made perfect sense in the context of military applications where value is quantified in the effectiveness with which the mission is executed: you locate an explosive mine over the course of several hours searching without risk to humans and with less margin for human error. Fast forward 10 years, now in the role as CEO of LeeWay Marine, I am again evaluating robots, but from the perspective of finding a commercial solution that offers a competitive edge.

LeeWay owns and operates survey vessels from the Center for Ocean Ventures and Entrepreneurship (COVE) in Dartmouth, Nova Scotia, Canada. COVE is one of several ocean technology hubs in Atlantic Canada (Canada’s four eastern-most provinces including Newfoundland and Labrador, Nova Scotia, Prince Edward Island and New Brunswick) and, therefore, we are immersed in a community which is hell-bent on developing the latest and greatest (sometimes not) ocean technology. We see it, mobilize it, launch and recover it (if all goes to plan) and evaluate its effectiveness for commercial use.  AUVs, towed robotics, synthetic aperture sonars, multi beams, acoustic sources, acoustic arrays, mine hunters, submarine hunters, oil hunters, fish trackers, ROVs, drop cameras, UxVs; the list is endless, and we love every second of it.

In light of that, I can postulate over this robotics conundrum with a reasonably experienced and increasingly discerning eye. I know with certainty how important unmanned systems will be in the geosurvey ecosystem of the future, I also know that the end clients (oil and gas producers, offshore wind farm owners, IT companies, national hydrographic agencies, etc.)  are increasingly confident in the data harvested by these machines. I watched real-time as Kraken Robotics’ KATFISH (towed synthetic aperture sonar, SBP, MBES) was hovering 10m above the ocean floor, being towed at 8 knots and capturing high resolution imagery of a never-before-discovered wreck in the North Atlantic. I watched the faces of experienced hydrographers who couldn’t believe the level of automation associated with post-processing and the speed with which the product could be delivered to the client. So, given the operational efficiencies robotics can inherently deliver, one would expect them to be the panacea to satiate any offshore infrastructure developer’s hunger to find efficiencies in survey operations. Yet, as we monitor the offshore survey market, one need only check AIS Marine Tracker in various prolific survey regions to see… same ol’, same ol’ large floating hotel/survey vessels shepherding around a precious sonar head about the size of a dinner plate. To be clear, that’s exactly what we at Leeway still do! 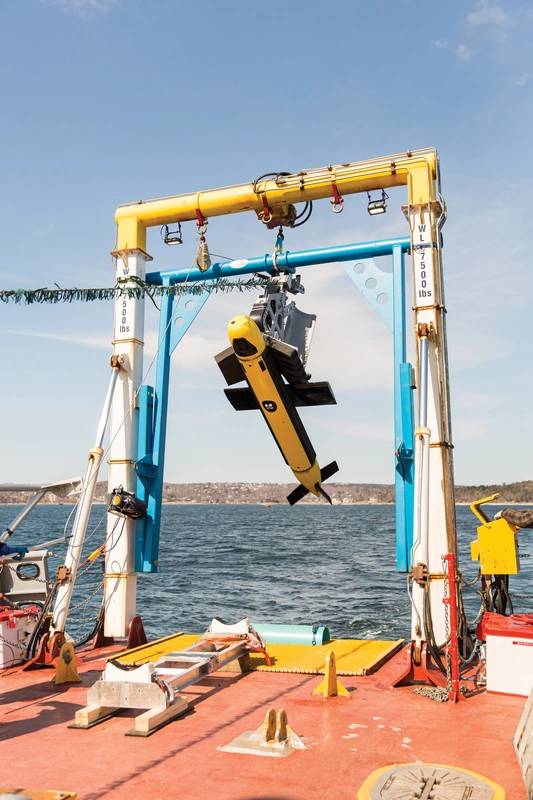 Deploying the Kraken Katfish.Barriers to innovation
Why is it, with such great survey robotics on the market, do we find ourselves “in irons”? Having debated this issue at length with many broad-minded industry experts, one of the classic lines is that ship owners/survey companies have too much capital tied up in vessels and other survey assets. This introduces significant reluctance to move aggressively towards robotics. While there may be some truth to that, I would argue, based on my observations, that large multi-national survey companies are in fact the early adopters of this technology, influencing and enabling their use in a broader market. From my observations, squeezing the remaining value from existing ships is not why ocean robotics are making a slow entry to the survey market.

The actual problem, based on the analysis we’ve done, is that robotics alone will not yet force a paradigm shift because they don’t significantly improve the overall value proposition to force (or even allow) large survey vessels to be tied up. Particularly the vessels with geotechnical capability, something robots have yet to influence. From our perspective, most UxVs on the market, with the exception of XOcean’s XO-450 and Kraken’s Katfish, have been developed to target competitive, tactical capability enhancements rather than a solution to a strategic commercial problem. Vessel operators and survey companies generally still require medium/large ships to launch, manage and recover UxVs and host the contingent of surveyors and marine crew. Increasingly, data post-processing also happens aboard the vessel during the data acquisition phase so a product can quickly be delivered to the client and the project can be monetized. If nothing else, the ship is just a hotel which may or may not use robotics. If robots are present, value on that operation is likely based on effectiveness or safety rather than efficiency.

For example, carrying a 3000m depth AUV on the back of our 140’ survey vessel is certainly possible (lets carry 4). We have a fantastic launch and recovery stinger to do that. The reality is, recovering costs associated with buying or leasing the AUV more than triples the project cost compared to the old fashioned (and reliable!) hull or pole-mounted MBES. We’d never win the bid, plain and simple, if we are trying for any actual ROI, with an AUV. In the alternative, let’s try a few USVs; they’re a bit less onerous in terms of costs and risk management. Strap a LARS on the port and starboard decks, launch a few USVs and increase your efficiency by doing 3 transects at once. Add two techs and two USV operators to the existing brigade of 12 surveyors, two marine mammal observers and two archeological observers and you find yourself in an 800-ton survey ship simply to accommodate all the brains and eye balls. It turns into a dog’s breakfast and it’s not worth the trouble.

Alternatively, lets eliminate the ship completely and take a 5m USV at 4 knots, launch it from the government wharf in Sambro, Nova Scotia, send it a few nautical miles into the North Atlantic, and watch the “Sister Islands” have their way with it. It doesn’t matter how many naval architects analyzed the hull form; there is no 5m anything that can take the “Sisters”, period. If it is so lucky, such a capable vessel will operate with impunity for 10-15 days collecting terra bytes of great data. That concept is quite sound in my opinion and offers a very decent ConOps. It isn’t without flaw or risk in the context of geosurveys as the rich data is locked aboard and “hopefully” the data is good. There are some additional operating concepts that could be applied here including smaller, fast support vessels and unlimited broadband VSAT solutions which may make it work well. 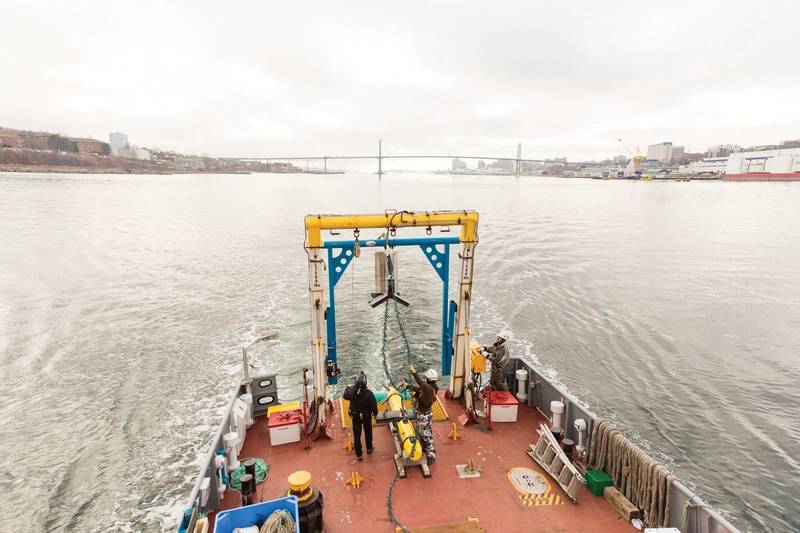 Who owns new value creation?
In our view, there are several interesting permutations and combinations of UxVs coupled with vessels that can be applied to create a decent solution set; but, no matter how you slice it, it becomes a race to a converging minimum viable solution. From what we see, the shift to robotic dominance is simply trading value from the owners of one capital asset to another. From a large, expensive and relatively non-complex asset to one or several, highly complex robotic assets. Medium term operational efficiencies will certainly be found in the various ship/robot permutations and relationships, but that will only result in margin for the asset owners as robotics owners use comparative ship costs as a baseline for their pricing strategy. Vis a vis, a robot can save 20% compared to a vessel day rate. Why wouldn’t they do that; they’d be leaving value on the table by doing otherwise. So, developers will pay about the same as they do now for the processed data. Moreover, when I look at this problem from the perspective of the developers; it’s no surprise that large ships still dominate. Why take the risk of something new if it basically costs the same? There’s already enough risk in these projects, why take more? The value prop isn’t yet there for mid and offshore surveys.

If we’re serious about increasing productivity, there must be a fundamental shift in the overall methodology - one that considers the full spectrum of technical advantages associated with vessel designs, sensor technology, autonomous platforms, power density and machine learning. I’m positive AI and blockchain methodologies fit in there somewhere. When we tackle this problem at LeeWay, we start with three fundamental realities:

1.Collecting geophysical data requires a physical object (ship, satellite, AUV, UxV, buoy, etc) to be present at the point of acquisition; therefore, the volume of data collected is primarily a function of distance traveled.

2.Commercial value is always measured as a function of time (revenue per period). Processing the data quickly matters to the whole value chain.


3.Efficiencies in acquisition methods, sensors and processing will ultimately begin to converge towards a monolithic solution with consistent operating margin. Similar to the passenger aircraft industry where operating efficiencies have become so finely tuned and industry wide, only marketing and sales matter, generally speaking.

Speed is what matters
Since value is measured over time, the volume of commodity (in this case data) per unit time is the fundamental influencer on total potential value. All things being equal, increasing the volume of “post processed” ones and zeros per unit time is the only way you can possibly have a growing revenue curve per asset. Therefore, value is directly related to speed of data collection/processing and only speed.

Speed on the ocean is not new. LeeWay recently commissioned North America’s fastest offshore data acquisition vessel which has a max speed of 55 knots. Install 5400hp in a 100,000 lb. boat and voila! However, regardless of the installed power and stability offshore, as soon as the sensors are turned on, we cut the throttles to 6-8 knots because that’s the sensor’s maximum performance speed as designed. To be clear, the game changer is not about the vessel at all, it is about the speed at which the sensors can effectively operate. If you’re reading this and, in a position to influence the direction of your product development and research, think speed. When I say speed, I mean 20-30knots and higher. I know the physics is hard, I’ve been cautioned several times. Nonsense. It hasn’t been developed because there hasn’t been a need. If you want to change the survey industry, build an MBES or SAS that can operate at 25 knots. Let everyone else spend their time polishing the apple with ultra-efficient eco USVs and AUVs, meanwhile, your 25 knot MBES will completely upset the apple cart.
The three speed fundamentals:

• Speed is the most influential variable that will impact the volume of monetizable product over a specified period.

• Speed reduces time and time drives all operating costs on the ocean.

Once speed is well established, then the suite of operational efficiencies such as autonomy, power density, platform stability, data transfer rates, etc. will actually matter in a scalable way. It is conceivable that the final solution could be approached from two opposing directions. The first could see a solution derived from existing UxVs, scaling to larger, faster platforms. The second would see high-speed, medium-to-large vessels being designed with autonomous technology as a fundamental operating system. In my mind, the ultimate solution is quite evident and based on the physics of the ocean. Added mass of water requires vehicle mass in order to counteract momentum; hence, I side with the concept of starting with substance and building from there.

From our perspective, all efforts to improve efficiency on the ocean are important. Eliminating people at sea, using smaller, more efficient platforms with longer endurance, better coverage rates and higher resolution are all marginal value propositions that matter. None of those elements stand to unlock value like introducing sensor speed. 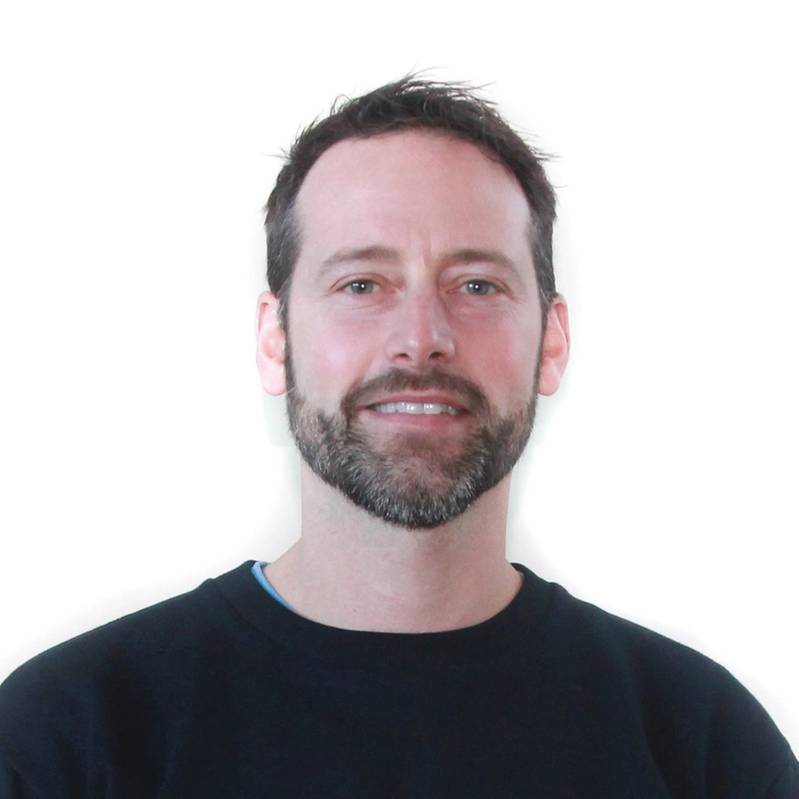 About the Author: Jamie Sangster is the founder of Leeway Marine. Prior to Leeway, Jamie served in the Royal Canadian Navy for 20 years as a marine systems engineering officer and naval architect, and has extensive sea experience aboard Canadian major warships. 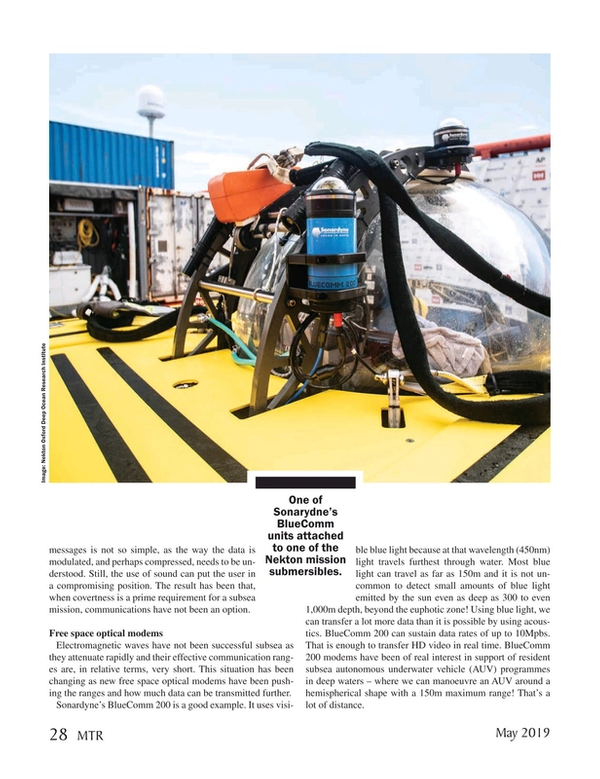