Sure, basic (open-ended) research gave us penicillin — but thousands of applied (commercial, finite) research projects carried out for governments and industry yield facts and non-stop innovation. At SINTEF, Norway’s premier research body, the breadth and number of research undertakings are mostly targeted for industrial and national clients, but the results speak of wide-ranging societal impact.

Over our decades of SINTEF coverage, the SINTEF Group — now six business units, including dedicated “ocean”, “energy” and information technology divisions — has tripled its revenues to about $356 million. The multidisciplinary research community “delivers innovation”, it says, and 4,000 customers worldwide attest to that by buying over $50 million worth of SINTEF R&D every year. Now one of Europe’s largest research institutes, some 2,000 international employees have pushed the 60-year-old institute to the forefront of purposeful commercial and publicly funded research.

“Technology for a better society” is SINTEF’s stated vision, and contract R&D is the declared path to that end. Yet, many a Norwegian environmental rule (or tax) or report is steeped in the logic and findings of SINTEF surveys and analysis. In fact, when you think of what’s new out of Norway, you’re probably thinking of a technology or undertaking that has the fingerprints of SINTEF researchers all over it. Its research cadres — staff, former staff and supervising and executing principals that never quite move on — is rounded out by research project teams created internally by SINTEF as assignments for clients arise. At recent count, that’s about 5,700 projects a year in Norway and abroad for this R&D “conglomerate” with a hand in all manner of enterprise. 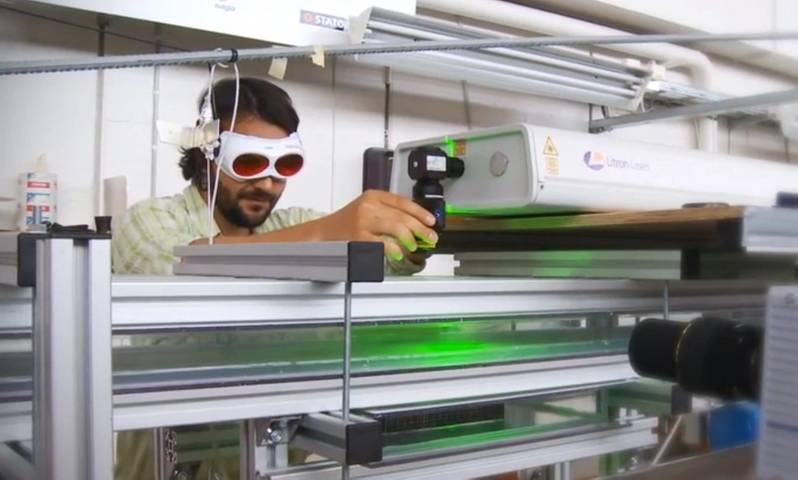 Help wanted: a researcher uses a particulate scanner. Credit: Screenshot of SINTEF videoCommercializing
Above all, it’s SINTEF’s ability to attract and develop talent and help create new enterprises by commercializing scientific advances that have transformed this community into a company. Along the way, it has helped change attitudes about targeted research being too … targeted.
SINTEF sees society’s problems as twofold: one opportunity for study and one to create commercial value out of the apparent solution. So, when salmon lice infestations at a Norwegian salmon farms became too great a problem, SINTEF adopted a two-tier approach: help regulators study the salmon, the lice and the river and offer to help creating innovations like lasers that shoot the lice off the fish. For large-scale aquaculture and fisheries vessels, there’s SINTEF wave and model analysis in first-class test tanks. The result has been offshore aquaculture structures on the scale of an offshore oil rig and fish-handling vessels for worldwide markets.

“The commercialization of our research results is part of SINTEF’s role in society. We achieve this by means of licensing and creating new companies based on technologies developed as part of our research activities,” a SINTEF statement asserts, adding, “We are active shareholders in our spin-off companies and … sales of our ownership interests in successful spin off companies release funds which are invested in new knowledge development.” The net-sum of those spin-off companies is over four billion Norwegian kroner a year. So, it’s win-win, added value and the rest.

Lab luxury
It wasn’t always that way. Just 20 years ago, SINTEF was nearly entirely reliant on research funds portioned out in Oslo. Nearly all of what was earned in 2000 was actually Norwegian government funding.

Yet, the environmental assessments, materials testing and structural standards work carried out by SINTEF in the early days of Norwegian oil and gas — and the early days of Norway’s oil-fueled industrial expansion — paved the way for what would become that gold mine of research and R&D contracts: a mighty offshore oil, gas and shipping value chain. A constant haul of government environmental and sectoral reports and offshore industry contracts has since swelled SINTEF annual reporting.

Contract gains, however, were reinvested in labs to serve new industries. Over 60 well-funded SINTEF labs, tanks and other facilities can now test the model hull of a floating production unit or trial the transport of multiphase oil and gas well streams. Advanced microelectronics and nanoscale R&D have led to advanced medical sensor development and an expanded lab offering for health industry and materials development, two areas of science only very recently associated with Norway.

SINTEF now drives and qualifies advances in materials characterization and coatings technology. One obvious advance is that Norwegian subsea cables and subsea equipment bear a characteristic quality look. Labs in these and related segments include a throughput lab that uses dosing robots and pressure chambers to come up with “fluid transport” solutions for a variety of new and up-and-coming processes in industry and oil and gas. Among the non-offshore advances are special tubes and assemblies for Norway’s nascent automotive sector.

Standards testing
At all SINTEF labs, the technology at researchers’ disposal seems topnotch. The advanced materials lab in Oslo employs modeling and supercomputer infrastructure called SIGMA2, or the national infrastructure for computational science. Researchers use supercomputing and microscopy to determine the molecular responses of materials being lab-tested.

“We utilize a range of microscopy, spectroscopy and spectrometry techniques,” one of a preponderance of foreign-born researchers says of the materials science at SINTEF. Complementary facilities include a coating laboratory and field testing understood to have been availed by the likes of coatings giant Jotun for the award-winning antifouling and other surfacing products that meet numerous ISO standards tested for at SINTEF. Ice-resistant coatings are now being tested.

But, it’s in oil and gas that SINTEF researchers cover the gamut of Norwegian offshore energy value-creation. With the potential rewards high, spin-offs from oil and gas research have been many and stem from research into drilling and well control; exploration and production; gas-process tech; increased oil recovery; plug and abandonment; refining; safety and the environment; subsea systems and pipeline transport.

The modern Norwegian oil and gas industry is likely most in debt to SINTEF for the multiphase flow laboratory, and all its offshoots, where R&D tested new ways to handle well stream and get downhole tools, subsea and topside equipment into service. Some say it was here that Norway’s decades old pump makers “scaled up” to produce space-age, valve-dense tools to get the most oil and gas out of offshore reservoirs.

Flow assurance has been key. SINTEF expertise helped engineer the removal of things like frosted hydrates (or slugs) from gas and oil on its way to final processing. Decades of research have given birth to the Nyhamna and Hammerfest gas plants’ “slug catchers”, the landfall of angular pipes bearing multiphase gas from remote and arctic offshore fields.

Thirty years of research into flow assurance yielded a host of large and small innovations, and large-scale, medium-scale and small-scale flow laboratories (loops) still offer the chance in here to study hydrate behaviour via closed loops (and particle rays). For Norway, multiphase research has been the great nation-builder, bringing the wealth in cold-water oil and gas fields hundreds of kilometers to shore.
“It is often difficult to measure the gains of research in kroner, but I think I can safely say that this research (into flow assurance) has greatly benefited society, both the social and the commercial economy,” former research minister, Tora Aasland, is quoted by SINTEF as saying.

Enriched by a public-private business model, SINTEF people can find themselves in the lab; supervising strategic research via email or chairing spin-off companies. They might help test marine batteries to speed their use, or be the lead researcher contact at a newly assembled and funded industrial cluster. They could be devolving knowledge of spectral cameras to other researchers or the workings of marine cybernetics to foster a new UAV industry or launch the first mini-satellites (like the first launches by NTNU’s AMOS UAV lab, akin to the 60 mini satellites being sent up by Space X’s Falcon 9 rocket).

But, in the aftermath of 2014’s offshore standstill — with the specter of hundreds of out-of-work offshore vessels and other marine assets wasting away — Norway looked to innovation to find a way forward for its offshore industry.

One idea was to reorganize marine resources, including R&D, to instead tap the “ocean” industries, rather than just the seabed, for value-creation.
The ocean would provide the new raison d’être for fleets of offshore vessels modified to put crews aboard wind turbines; mine for seabed minerals or to tow cruise ships into fjords surveyed by SINTEF. Now, SINTEF Ocean Laboratory, a company in the new Group, will do the basic and applied research on the marine structures and operations the new ocean industries — everything from kelp-farming, to offshore aquaculture and wind energy — are expected to need. The Ocean Lab still studies seakeeping and DP; mooring; offshore floating production and loading; risers and pipelines … and aquaculture.

SINTEF clients are offered all the ocean elements in a deep test tank, ensuring the best study of marine technology. Indeed, the ocean labs are at the confluence of Norway’s coastal industries prowess.

SINTEF Ocean is the place to be, too, for studying new, offshore renewable energy systems and for marine cybernetics, or the study of marine control systems, including automated hardware and propulsor tests. “Ocean” also offers suites of software for everything from the deft control and monitoring of environmental technology to shipping aps like ShipX for calculating hydrodynamic vessel inputs, and VeSim, a tool that simulates heading and speed in a busy seaway.

So, while preserving Norway’s shipping and petro-strength is at the heart of so much R&D in Norway, SINTEF has built on that to branch out and offer researchers cutting-edge access to a brave new world of R&D subjects.