Risk is a mantra at Det Norske Veritas (DNV), and to be fair, at every major classification society. By their very nature, the identification, management and mitigation of risk runs through every aspect of class. Sitting atop DNV – and if the recently announced merger goes through, the combined DNV & Germanischer Lloyd (GL) – is Henrik O. Madsen, CEO, who shares with Maritime Professional his insights on managing risk in the maritime and offshore sectors.

While DNV is adept at steering its clients through risk, the organization itself is embarked on a venture – the proposed merger of DNV with German classification society (GL) – that comes with its own brand of risk. “First of all, during the negotiations we did agree on a business plan for the next three years, as well as an integration plan,” said Madsen in a recent interview from his office. “Some of the important elements that we have agreed on are for the vision of the company; we have agreed on the values and leadership principles. So the foundation on which we build this is really very strong.”
So while the organizations file mountains of paperwork globally to the specification of the various national competitive authorities, the fine details of what could be a classification behemoth – more than 17,000 employees globally with expertise in the oil & gas, renewable energy and power sectors, maritime and among the global top three within management system certification – takes shape.
“Also, we were very similar in opinion on the importance of technology, technology leadership and the need to invest in that to support our industry, to support our customers. So I think some of these risks were mitigated very well from the outset. Personally, what I see is the biggest risk is during the integration period is to ensure we really keep focused on our customers. We can’t take the eye off of our customers and their needs.” And it is the customers that ultimately benefit from the collaboration, according to Madsen. “If you are a ship owner you will see the combined DNV & GL with an even denser station network around the world, ready to support you anywhere in the world in a better way. And these stations, which number more than 300, will have a wider and deeper competence of expertise.”

Technology to the Lead
While human factors are routinely cited as the leading cause in maritime accidents, Madsen has a strong adherence to technology advances as the path to rationalizing maritime operations to optimal safety standards.  “In DNV we always had the commitment to invest 5 to 6% of revenue on R&D and innovation. And in the joint plan (the combination of DNV and GL) we are committed to invest 5% in R&D and innovation,” said Madsen. “So in terms of money, that will be about $150m of our own money invested every year in R&D and innovation. This is a huge commitment.” While technology advances in the maritime field have evolved rapidly in the past decade, driven both by the speed of business (ie. computing and communication technologies) ashore as well as by regulation,  the reluctance of the maritime masses to embrace and incorporate new products and systems is, at times, maddeningly slow.
“Sometimes I’m surprised how long it takes to take up new requirements on board. I think those who wait until the last minute do run a risk. (For example) if you look at sulfur requirements coming in 2020, 2020 is coming very fast. It just seems that some are slow in understanding that they must have a plan. There are different options, but it is necessary to have a plan. The same goes for ballastwater treatment systems: of course the convention has not yet been ratified but owners and operators should have a plan for how to do it when it does come. And it will come,” Madsen said. “I come from the R&D arm of DNV; we tell all of our customers that technology can solve many problems whether related to Safety or reliability. We are big believers that if we continue to invest into technology and innovation, it can help to better manager risks.”

The Global Economy
Arguably, there has been no greater risk to international business in the past five years than a sluggish global economy, and while a ‘down’ market is often a ripe one for mergers and takeovers, Madsen said this was not a factor in the decision to merge DNV and GL. “From our side we have tried to make this happen for the last six years and we have tried several times before that too,” Madsen said. As proof, he said that when results for both DNV and GL come out, the hallmark will be solid growth.  “We had good organic growth rates of 8-9%; in the oil and gas there is a growth of about 15%, while the shipping part is also growing but at a slower rate, slowing down a bit, as will deliveries in the coming few years. In the merger, there are of course going to be some duplicates, redundancies of function that will have to be addressed, but really the merger is a story of growth; we have separately been growing 8 to 9%, and together I think we can grow even better.”
“In 2000 we had actually negotiated an alliance type of agreement which eventually fell through. Then in 2006 GL came up for sale and we gave what we thought was a very competitive bid but we didn’t succeed. Then we have been talking with the family that did win the bid ever since. The fit between two class societies is by far the best between DNV and GL in all respects. GL are strong on marine warranty, marine operations, jack up technology, they have a good presence in the Middle East; and these were four areas where we wanted to strengthen ourselves. We are very strong on floaters, deep water technology, harsh environment, Arctic and pipelines.”

The Changing Role of Class
As class continues to consolidate into fewer, larger and more powerful organizations, debate will rage in many circles regarding the implication to the industries as a whole. But in Madsen’s view, it really boils down to clarity of purpose. “Our purpose is to safeguard life, property and the environment. That is the purpose of DNV. It’s a very motivating purpose, but we have to be careful to not always end up in a policing role, because all of the competence and expertise that we have should be delivered to our customers in a more proactive means,” he said. “We’ve been trying to bring the competence, our innovation and industry knowledge on a broader scale. But still staying within our roles. We are very clear on our roles. One of the first things that we tell all of our own staff is that we don’t certify our own work. Second we don’t design, build or operate our customer’s structures or management systems.”
While DNV has been progressive in recent years to challenge industry, pushing the envelope on the environment and fuel efficiency, amongst others, Madsen maintains that the real power of ascertaining risk and reward lies with industry.
“We have challenged the maritime industry quite a bit, with a challenge in energy efficiency, with a challenge on environmental requirements and to look to alternate fuels like LNG. I think that’s also our job because we have so much technical competence to really challenge the industry and bring new technology forward, and then it is up to the industry to use it or not.”

(As published in the 1Q edition of Maritime Professional - www.maritimeprofessional.com) 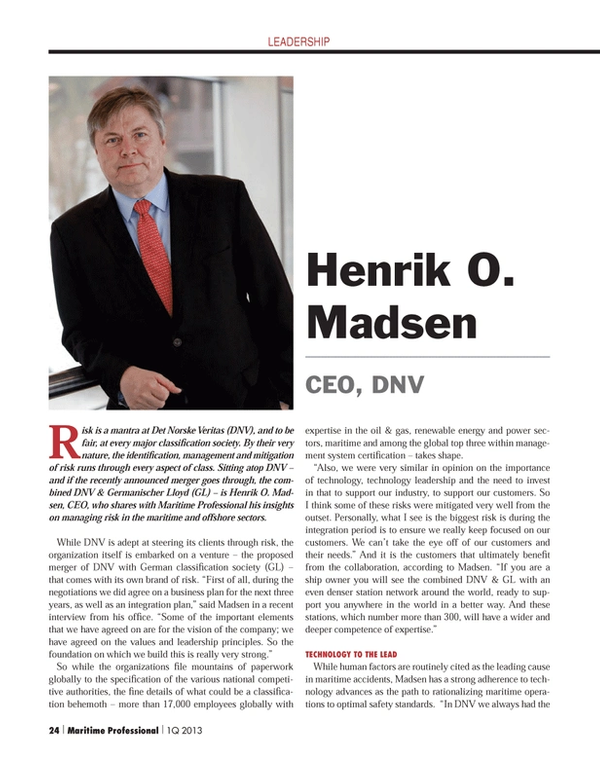