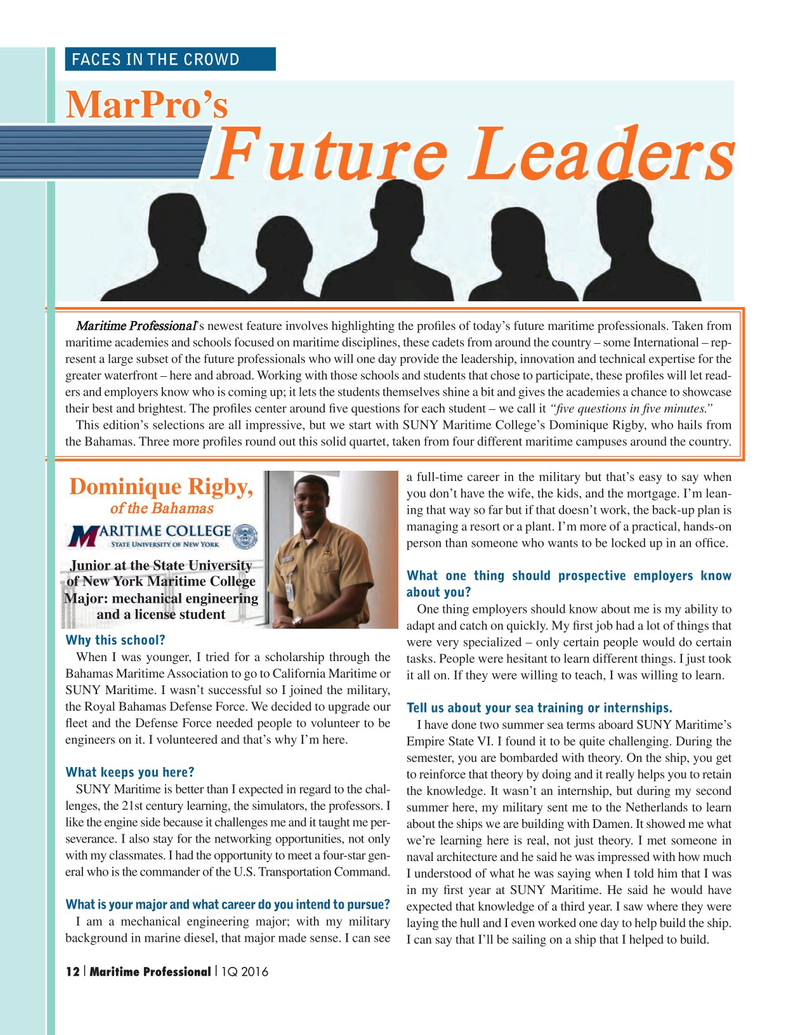 FACES IN THE CROWD

Maritime Professional’s newest feature involves highlighting the pro? les of today’s future maritime professionals. Taken from maritime academies and schools focused on maritime disciplines, these cadets from around the country – some International – rep- resent a large subset of the future professionals who will one day provide the leadership, innovation and technical expertise for the greater waterfront – here and abroad. Working with those schools and students that chose to participate, these pro? les will let read- ers and employers know who is coming up; it lets the students themselves shine a bit and gives the academies a chance to showcase their best and brightest. The pro? les center around ? ve questions for each student – we call it “? ve questions in ? ve minutes.”

This edition’s selections are all impressive, but we start with SUNY Maritime College’s Dominique Rigby, who hails from the Bahamas. Three more pro? les round out this solid quartet, taken from four different maritime campuses around the country.

Dominique Rigby, you don’t have the wife, the kids, and the mortgage. I’m lean- of the Bahamas ing that way so far but if that doesn’t work, the back-up plan is managing a resort or a plant. I’m more of a practical, hands-on person than someone who wants to be locked up in an of? ce.

Junior at the State University

What one thing should prospective employers know of New York Maritime College about you?

One thing employers should know about me is my ability to and a license student adapt and catch on quickly. My ? rst job had a lot of things that

were very specialized – only certain people would do certain

When I was younger, I tried for a scholarship through the tasks. People were hesitant to learn different things. I just took

Bahamas Maritime Association to go to California Maritime or it all on. If they were willing to teach, I was willing to learn.

SUNY Maritime. I wasn’t successful so I joined the military, the Royal Bahamas Defense Force. We decided to upgrade our Tell us about your sea training or internships.

? eet and the Defense Force needed people to volunteer to be

I have done two summer sea terms aboard SUNY Maritime’s engineers on it. I volunteered and that’s why I’m here.

Empire State VI. I found it to be quite challenging. During the semester, you are bombarded with theory. On the ship, you get

What keeps you here?

SUNY Maritime is better than I expected in regard to the chal- the knowledge. It wasn’t an internship, but during my second lenges, the 21st century learning, the simulators, the professors. I summer here, my military sent me to the Netherlands to learn like the engine side because it challenges me and it taught me per- about the ships we are building with Damen. It showed me what severance. I also stay for the networking opportunities, not only we’re learning here is real, not just theory. I met someone in with my classmates. I had the opportunity to meet a four-star gen- naval architecture and he said he was impressed with how much eral who is the commander of the U.S. Transportation Command.

I understood of what he was saying when I told him that I was in my ? rst year at SUNY Maritime. He said he would have

What is your major and what career do you intend to pursue?

expected that knowledge of a third year. I saw where they were

I am a mechanical engineering major; with my military laying the hull and I even worked one day to help build the ship. background in marine diesel, that major made sense. I can see I can say that I’ll be sailing on a ship that I helped to build.