At the stroke of midnight on January 1, 2018, the global shipping industry will be expected to comply with the IMO agreed upon 0.5% sulfur cap for bunker fuels with few waivers available.

For vessels which have installed scrubbers, higher sulfur fuels may continue to be used. IMO’s recent agreement on the ban of carriage of non-compliant fuel assures that cheating will not be allowed providing that port states integrate this ban into their respective port state control inspection programs.

All that said, it is important to recognize that the global shipping industry is fully committed to successful implementation of the global cap recognizing the significant environmental benefits from the global use of low sulfur fuel and in spite of the expected significant increase in cost for compliant fuels.

So, what are global shipping’s biggest worries?

Availability of compatible fuels is another concerning issue given that there is no global fuel standard which covers the expected and numerous blends which are likely to be produced worldwide. While the IMO sulfur cap addresses establishes the 0.5% sulfur content, it does not address compatibility issues associated with the expected multiple combinations of components which will make up these blends and how these blends may compromise the safe working order of existing marine engines perhaps to the extreme result of total loss of power on a vessel.

Recognizing there is no legal provisions for a transitional period, while yet recognizing the complexity of this global transition to low sulfur fuels, there is a need for port state control officials to exercise a pragmatic and realistic approach to enforce compliance during the initial few months following 1 January 2020. Similar to the program put in place by the US government during implementation of the 1% and 0.1% sulfur emissions control area (ECA) requirements, the adoption of some mechanism that allows a vessel inbound with non-compliant fuel to report this fact, provide evidence that best efforts have been made to purchase compliant fuel and that compliant fuel was not available in the vessel’s previous ports of call. One caveat to this program which is also applied in the US ECA fuel requirement enforcement program, is that it would only be permitted during the early months after 1 January 2020 and would not be endless in time nor able to be abused on a regular basis by vessels and/or shipowners.

Given these concerns, what’s next and how will industry make the contributions necessary to inform IMO member state decisions on these issues? The Chamber of Shipping of America as a founding member of the International Chamber of Shipping (ICS) is providing input on these issues which are collectively being discussed by a number of international trade associations including ICS, BIMCO, INTERCARGO, INTERTANKO and the World Shipping Council. Supporting a timely and effective implementation of the 2020 global sulfur cap, these organizations have submitted a number of submissions to an IMO meeting to be held in July 2018 to address many of these implementation issues. Submissions from industry include papers on a standardized format for a ship specific implementation plan, safety implications associated with 2020 fuels, a draft standard for reporting fuel oil non-availability, requirements for sampling points and verification and control mechanisms.

As ICS Chairman Esben Poulsson stated, noting industry’s full support for a smooth and timely implementation of the global cap, “Unless a number of serious issues are satisfactorily addressed by governments within the next few months, the smooth flow of maritime trade could be dangerously impeded.” Mr. Poulsson went on to state that we “need to understand that ships will need to start purchasing compliant fuels several months in advance of 1 January 2020 ... but at the moment, no one knows what types of fuel will be available or at what price, specification or in what quantity. Unless everyone gets to grips with this quickly we could be faced with an unholy mess with ships and cargo being stuck in port.”

The Author
Kathy J. Metcalf is President & CEO at the Chamber of Shipping of America. Kathy graduated from the U.S. Merchant Marine Academy in 1978 with a Bachelor of Science degree in Marine Transportation and Nautical Sciences. A leader even back then, she was a part of the first co-educational graduating class at Kings Point. Upon graduation, she sailed for five years as a deck officer on crude oil and product tankers with Gulf Oil Corporation and Sun Company. 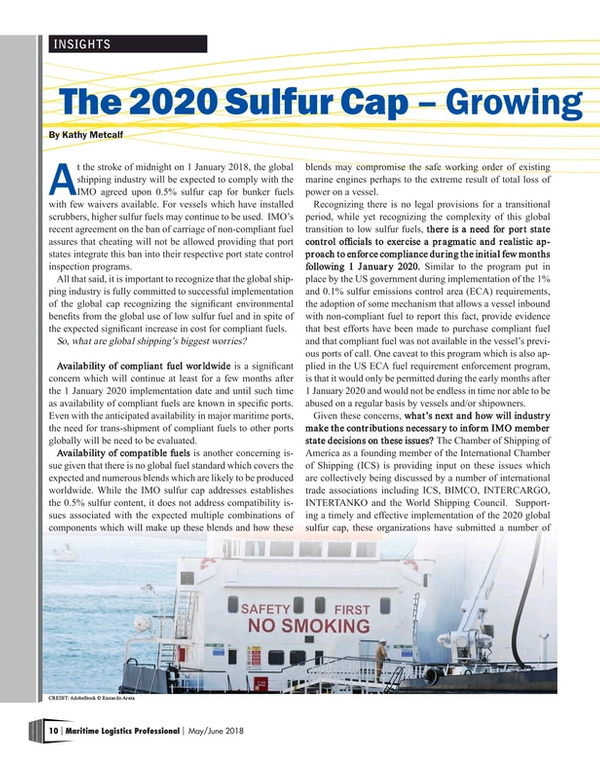 Other stories from May/Jun 2018 issue