Who Wins in Shipping’s Battle for Data?

Weather has to be one of the most important building blocks of any digital operations solution. But, that’s only one of dozens of individual variables. Building a data management solution that navigates the unexpected, and not just the low hanging fruit, is the way to go.

One of the most fiercely fought battles in shipping today is the battle for data. On a weekly basis, we see companies of all stripes – ship managers, owners, class societies, equipment manufacturers and even coating suppliers – investing in their own digital solutions and fiercely competing for control over data: the new oil. Each of these is creating systems aimed at improving performance, claiming that they are ideally placed to harvest a variety of performance data and position themselves as the one-stop shop for all the data that a voyage generates. Of course, there’s a good reason for all organizations to up their game digitally – every aspect of personal and business life has been affected by the march of technology, and every business needs to invest in the right talent to compete in this context.

And the business case is clear – according to analysts at Future Market Insights, the push for better data and optimization solutions is driving the marine electronics market to dizzying new heights. This market has already reached more than US$4.14 billion in 2018, but is predicted to jump to US$7.75 billion by 2028. Future Market Insights expects marine electronics market revenues to grow at a rate of 6.5% per annum over the next decade.

However, when we look at whether this trend benefits the market, it’s unclear that this battle for control over data is really delivering results for the market.

Data: does the hype match the results?
While big owners or original equipment manufacturers (OEMs) may have the budgets to invest in their own digital systems, for the many smaller owners, operators and suppliers (who make up the majority of the market), digital transformation is beyond the reach of budgets stretched by a continually challenging market. C-suite respondents to a recent Futurenautics study revealed that 76% of their organizations are investing less than US$100,000 per annum in their digital initiatives, with 57% investing less than US$25,000 per annum. Only 11% of organizations are investing more than US$1 million annually. Similarly, in a recent study by Inmarsat on IoT adoption, when compared with other industries, shipping had a high proportion of early adopters – but a similar number of ‘laggards.’

Future Proofing
It’s clear that we need an alternative to the closed systems that are beginning to proliferate, which can hide multiple inefficiencies and practices that ultimately harm their users. Owners and operators need to be able to choose what data sets they integrate into the platforms they use – and take control over what they pay for. Either paying suppliers multiple times for overlapping datasets or being locked into paying for information they don’t need benefits no one. The platforms we build need to allow users to customize the data they use – and must also be open enough to incorporate new datasets from unexpected places.

This is vital, as, whoever’s creating the solution will tend to measure what’s closest to their own business area and simply focus on that. For example, if your software system is built by your engine manufacturer, your best data will focus on how you can optimize your engine and ignore other vital factors and information.

Data solutions need to be built by looking at the voyage as a whole, and looking at the factors that most directly impact the success of a journey across the sea. While undoubtedly there are powerful efficiency savings to be made by building up marginal performance gains, if we build solutions that focus only on what’s easy to measure, the solutions we create won’t deliver the results the shipping community needs.

This is why, we argue, weather has to be one of the most important building blocks of any digital operations solution.

Weathering (multiple) Storms
Of all the factors influencing a voyage, wind, waves and ocean currents can affect the performance of a vessel most. The resistance when navigating in unfavorable conditions generally increases by 50-100% of the total ship resistance in calm weather. According to MAN Energy Solutions’ analysis of trading conditions for a typical 140,000 dwt bulk carrier on some routes, the increased resistance, or sea margin, can reach extreme values up to 220%.

Regardless of the scale of an investment in digital solutions, discounting the weather margin ignores the most existential threat to a voyage. Statistics from the International Union of Marine Insurance (IUMI) indicate that it is the leading cause of total loss of shipping between 1996 and 2015. Weather accounted for 25% of total losses in that period and this increased to 30% in 2001 and 2005. This figure further soared to 48% from 2011 and 2015. With climate change on the rise, the world has been witnessing severe weather events more than ever before.

Weather conditions can also delay arrivals to ports, halt departures, limit loading, compromise fuel efficiency and even expose crews and cargoes to peril. With tight operating margins, taking into account weather forecasting can make the difference between profit and loss for companies sailing across the world.

Focusing on weather is just one part of the puzzle however. The true potential of digital solutions comes in the ability to bring together multiple datasets in a manner that reveals the unexpected and gives actionable insight. We need to build solutions that can monitor the present, analyze the past, and then predict future performance.

One such example is this interactive heatmap, [refer to image: piracy heatmap] which highlights the relative risks of piracy in different areas. Based on this information, a captain can decide where to accelerate through potentially risky areas, and where it will be safer to slow down and save fuel. This map is based on machine learning; a process that examines the relationships between factors, and works out which are the most important.
In this instance, many of the influential factors are as expected; wind speed, direction and wave height and swell direction are the most important, as well as light levels. However, the day of the week also plays a part.

On the face of it, this may seem illogical; is a risk of piracy really worse on a given day of the week?

The answer, it turns out, is yes. In Somalia, Fridays are days of prayer. Pirates, it turns out, can be divided into two groups. Less experienced, opportunistic, ’part-time’ pirates, and hardened ‘professional’ pirates. The former group will observe their holy days, while the latter will venture out regardless. Because of this, if a pirate attack occurs on a Friday, it is more likely to result in a hijacking. Operators can use this information to make their operations safer and more efficient – all thanks to the power of machine learning.

This is just one example of the fascinating possibilities that Big Data opens up. But how can we ensure that as wide a segment of the industry as possible can benefit from solutions like this?

Here are a few ideas:

The battle for control of shipping’s data is far from over – and there are bound to be unexpected developments along the way. However, if those building the solutions adopt these principles – we can ensure that it’ll be the users who ultimately win.

Stuart Nicholls is founder and CEO of StratumFive, a dedicated maritime data application provider. Over the last 30 years Stuart has witnessed the digital transformation of the shipping industry, from the demise of morse and telex as a young deck officer, to the introduction of internet as a serving deep sea Master. When he came ashore Stuart bootstrapped StratumFive, then a vessel tracking and remote monitoring software company. A decade later, StratumFive now serves 450 shipping companies and 11,000 vessels with an expanding suite of applications emerging from the growing data being sent ashore within the shipping community.

This article first appeared in the NOV/DEC edition of Maritime Logistics Professional magazine. 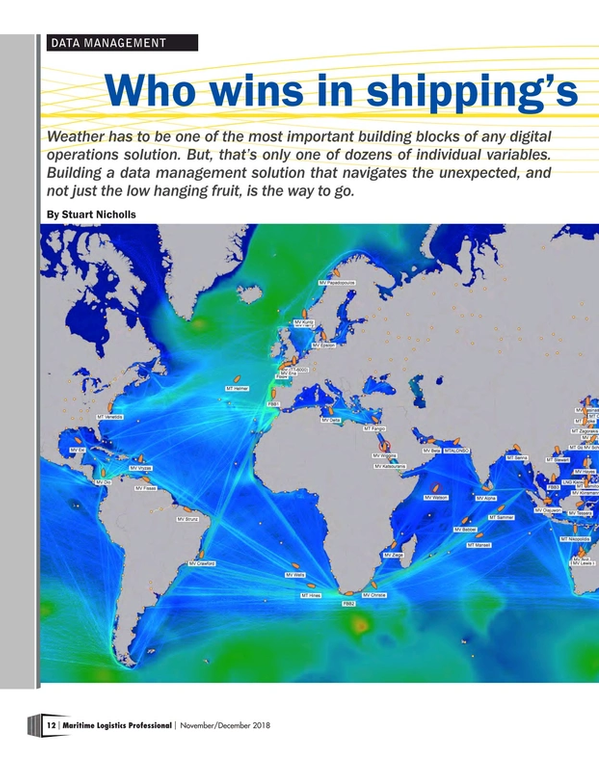 Read Who Wins in Shipping’s Battle for Data? in Pdf, Flash or Html5 edition of Nov/Dec 2018 Maritime Logistics Professional

Other stories from Nov/Dec 2018 issue