Innovations in computer display technology would seem to have recently hit a plateau. With the advent of LCD panels, improvements in computer displays have recently been limited to larger screens, higher pixel resolution, greater energy efficiency, and lighter, more efficient use of base resources. Yet there remains two areas where computer display manufacturers can continue to offer improvements: the human-machine interface, and local display intelligence. To offer the most effective solutions, improvements should maximize their utility with improvements in performance for specific environmental conditions. There are several features a computing display can bring to embedded computing stations aboard ships, or ocean platforms; in particular, the two most glaring problems for users when out at sea are low-light environments, and the technical ignorance of the average user when faced with crashes or machine malfunctions. Advances in the display interface can lessen the effects of these problems and much improve the user experience.

A Wave of the Hand: Precision Sight
First, let us consider what most bridge computing stations are like; for instance, this might be an ECDIS charting station that could potentially be accessed at any time of the day or night. This would mean that the display brightness would be constantly adjusted according to the time of day and environmental conditions under which it is being used. During the day, the brightness would be much higher; at night, much lower. Daytime viewing is not a worry: it’s the standard. Yet the other brightness levels, for the rest of the day, are specifically addressed within the ECDIS standard: it requires that any ECDIS type-approved display must be capable of rendering accurate colors at three different brightness intensities.
ECDIS-Certified Comfort
These carefully defined intensities demonstrate that the ECDIS standard was created, first and foremost, to have a convenient means of adjusting these intensities on-the-fly. When facing a large, bright screen in near-darkness, finding the precise location of the controls on an LCD panel can problematic. To address this issue, the controls may be backlit, and equipped with a proximity sensor. With a simple wave of the hand in the controls’ general area the machine interface will light up, allowing the operator to easily and quickly re-set the brightness level to his or her desired intensity. Additionally, for an ECDIS station, the controls should offer presets that automatically adjust the display to one of the three type-approved, color-calibrated intensities stipulated by the ECDIS standard.

Making Things Easier
Because this is a bridge environment, typical users who depend on these displays will not be trained in troubleshooting system failures; additionally, a display failure would be, in terms of the system it is serving, catastrophic. To address situations where the display or computing system fails, a BIOS level diagnostic utility may be provided. By integrating the diagnostics at the BIOS level, the display will be able to generate a quick rundown of subsystem integrity for any user who requires it, at any time.
Imagine, for instance, a navigator who arrives on the bridge to lay out a chart. This navigator turns on the ECDIS station, but for some reason the display fails to light up as it should. Clearly there is something wrong, but faced with a dark screen and a fully integrated, closed ECDIS station, there is no way to discover what the problem might be without opening up the cabinet and digging through the internals. However, by pressing an Information button located among the monitor controls, the display terminal’s on screen display (OSD) immediately lights up with a quick rundown of the main computer subsystems: CPU, motherboard chipset, RAM status, VGA output status, motherboard voltage, temperature, storage media notifications and PSU status. Our average user—utterly untrained in computing system or networking administration—is made immediately aware of what the problem is, and whether or not it can be fixed elsewhere. Issues such as memory or PSU integrity might be able to be solved with a simple component substitution or re-wiring. Issues with the motherboard, CPU, or other hardwired components clearly indicate that the problem can only be fixed once the ship reaches port. However, armed with this information, the captain may now call ahead, file a report and have a service technician ready and waiting with a replacement product or with the necessary components for bringing the system back on line.

No Failure Will Get By Unnoticed
Clearly there remains room for improvement in display technology. By addressing the needs of specific industries and specific embedded computing requirements it is possible to deliver significant improvements that both the end-user as well as system integrators, designers, and technicians will appreciate.
Mark Liu, product manager at Moxa. 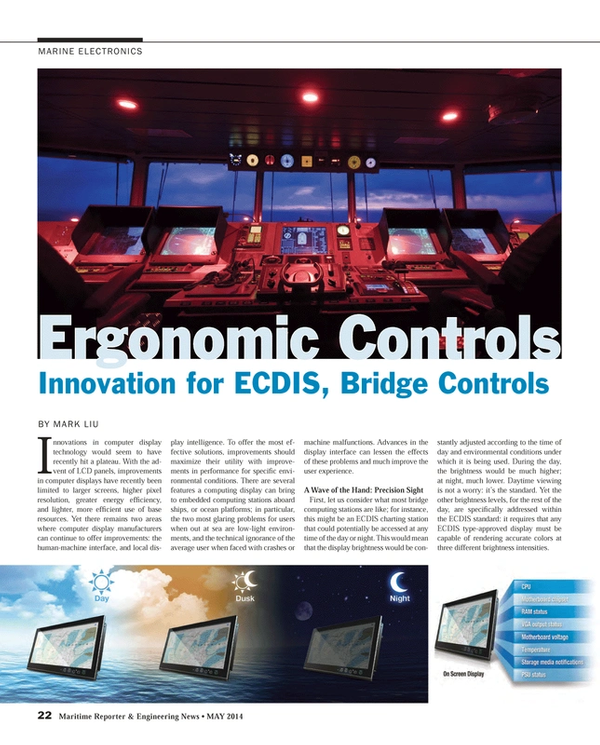