An EPC contract for a production unit can easily exceed $1 billion – and $3 billion for an FPSO has recently been breached.  Overall, this is a $20 to $30 billion annual market.  But, as described below, the sector is hitting some headwinds that could impact future business opportunities.

Future Business Drivers
The large number of projects at the ready-to-go stage is clearly a positive indicator for future floating production equipment orders.  However, timing of the decision to proceed to contracting will be influenced by future underlying market conditions. Fundamentals driving future orders in the floating production market remain generally positive.  World oil and gas demand continues to grow, crude pricing remains in the $100 to $110 range and deepwater drillers are operating at high utilization. But the sector is hitting competition from shale/tight oil and gas supply, energy companies have been cutting capital spending budgets and deepwater drillers are not quite as bullish as in recent past.

Growing Demand for Oil and Gas
On the positive side, global oil demand has grown at an average rate of 1.4% annually over the past 20 years.  With the exception of two years during the global financial meltdown, oil demand has increased year over year during this period. Growth in oil demand is widely expected to continue over the foreseeable future.  The IEA, for example, sees world oil demand in 2035 growing to 101 mb/d, an increase of 11% over today.  Global natural gas demand is also growing.  Gas consumption doubled between 1980 and 2010 and has grown another 13% since.  Over the past decade global natural gas consumption declined in only one year – 2009 as a result of the financial crisis.
The EIA sees world gas consumption growing at an annual rate of 1.7% through 2040.  ExxonMobil projects a 65% increase in natural gas demand by between 2010 and 2040.

Unconventional Oil & Gas Supply
But unconventional oil and gas resources are changing the supply landscape.  Use of horizontal drilling and hydraulic fracturing to exploit oil and gas resources locked in shale, siltstone and mudstone, as well as production of oil from oil sands, has opened huge new sources of energy supply.
Nowhere is the development of unconventional oil resources more rapidly advancing than in North America.  Between 2011/2014 the production of oil in the US and Canada increased 39%, primarily the result of incremental production of shale/tight oil in the US and oil sands resources in Canada.   As a result, production of oil in the US and Canada now accounts for 27.6% of non-OPEC oil production – up from 22% in 2011.
Development of shale/tight oil resources outside the US has been much slower due to land rights issues, access to drill equipment, environmental opposition to fracking, etc.  But the shale/tight oil revolution will undoubtedly spread beyond the US.   Opportunities are too big to ignore.  The EIA estimates that shale/tight oil resources worldwide total 345 billion barrels – and account for 10 percent of global oil reserves.
The equally spectacular revolution in shale/tight gas production is changing global gas supply and is threatening the dominance of major players in the LNG sector.   And like shale/tight oil, the shale/tight gas revolution is centered in North America.
Production of shale/tight gas in the US is projected to grow 52% over the next decade.   According to the EIA, shale and tight gas is expected to provide 71% of US natural gas production in 2024, up from 61% today.   In 2024 the US is expected to be producing 22.5 TCF of natural gas from shale and tight rock formations – the equivalent of more than three times the current natural gas production of Qatar.
A substantial, though yet unclear, portion of future U.S. gas production will be exported as LNG. BP expects that the U.S. “will become a net LNG exporter from 2016, reaching a total net LNG export volume of 11.2 Bcf/d by 2035.”  ExxonMobil sees North America shifting “from a net importer to a net exporter of natural gas by 2020 as production outpaces demand.”
Like oil, development of shale/tight gas resources outside the US has been much slower due to land rights issues, limited drill equipment, environmental opposition to fracking, etc.  But the shale/tight gas revolution will undoubtedly spread beyond the US.   As with shale/tight oil, the opportunities are too big to ignore.  The EIA estimates that world shale gas resources total 7299 Tcf – 32% of world natural gas resources
Shale/tight oil and gas development ultimately competes with deepwater for investment resources.  These resources are finite – and energy companies will channel their investment resources to the opportunities offering the best financial return.  Given the advances taking place in the shale/tight rock sector, it is reasonable to conclude that the shale/tight rock revolution is eroding investment in deepwater projects.
Significantly, the competitive balance is shifting in favor of shale/tight rock.  The cost of drilling shale/tight wells is falling – and well productivity is increasing.  Meanwhile, technical challenges of ultra-deepwater development, local content barriers and an overheated industrial base are forcing deepwater costs higher.
The pace of activity in the deepwater drilling sector is one of the best predictors of future equipment demand in the floating production sector.  The higher the pace of activity in the drill sector, the better the outlook for future floating production project starts.  According to Rigzone, drillship utilization in April was 84.8%, semisubmersible rigs 85.7%.  This includes utilization of drillships/semis in the competitive inventory.  These figures are historically strong and there has been little change in utilization over the past year.  But the less-than-positive message that many drillers recently have been giving about anticipated market conditions in deepwater drilling suggests a softening in the drill market is taking place – which is not good news for near term deepwater projects starts.
Global oil demand keeps growing, but growth in unconventional oil supply is pressuring future crude prices, energy companies are cutting back on capital expenditures, drillers are reporting market softening and shale/tight oil and gas opportunities are attracting investment resources that otherwise might be used for deepwater projects. Time will tell how these positive and negative drivers combine to impact future orders in the sector.   But it appears that a dampening impact is already being felt. Since the beginning of this year there have been orders for six production floaters – 4 FPSOs, an FLNG and a production barge.  This is roughly in line with the average ordering pace over the past ten years – but in terms of increment to inventory the ordering pace has declined.

The Author
IMA provides market analysis and strategic planning advice in the marine and offshore sectors. Over 40 years we have performed more than 350 business consulting assignments for 170+ clients in 40+ countries. We have assisted numerous shipbuilders, ship repair yards and manufacturers in forming a a plan of action to penetrate the offshore market.  Assignments included advice on acquiring an FPSO contractor, forming an alliance to bid for large FPSO contracts, satisfying local content requirements, etc.
Tel: 1 202 333 8501
e: imaassoc@msn.com
www.imastudies.com

(As published in the May2014 edition of Maritime Reporter & Engineering News - http://magazines.marinelink.com/Magazines/MaritimeReporter) 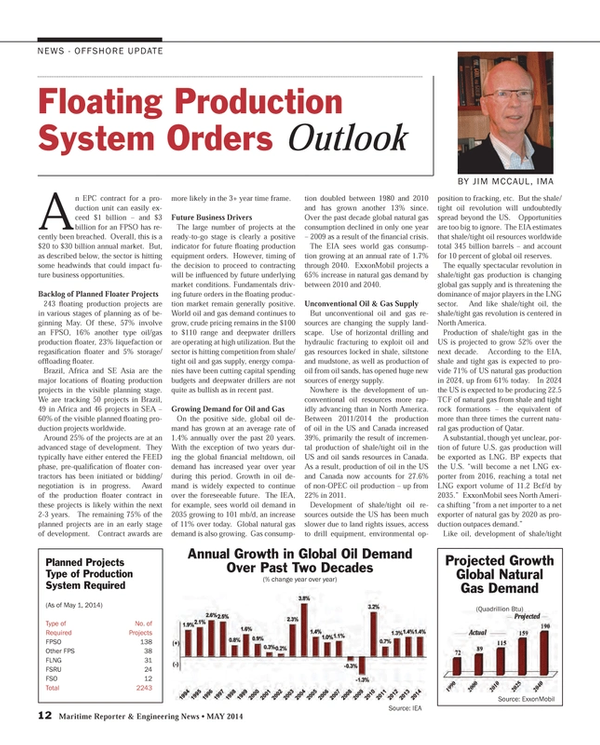