With consistent results of 2-5% fuel savings, Keppel Offshore & Marine’s subsidiary Blue Ocean Solutions (BOS) said that it has proved that emulsified fuel can bring significant fuel savings adding to the well established NOx reduction, if done correctly. The patented BOS Emulsified Fuel System (EFS) is designed to improve combustion efficiency by improving the injector fuel atomization. In addition to the measured fuel savings, firm evidence of better combustion has also been recorded in the form of increased heat release rate.
The key success factor in emulsified fuel is the ability to produce and maintain the optimum 10% water as water-in-fuel particle sizes of 2-8 microns. This is achieved with the patented BOS Emulsifier that has no moving, cavitating or vibrating parts. The system has been tested on both two-stroke and four-stroke engines. Diamond Shipping, one of the largest owner and operator of product tankers in the world, was the most recent to place an order for BOS EFS to improve fuel efficiency. To date, references include American President Line APL, Regent Seven Seas Cruises, Wärtsilä, Townsend Thorensen, London Overseas Freighters, B&I and others.  Even with numerous references under its belt, Blue Ocean Solutions has been cautious in rolling out information to the industry, instead waiting for independent verifications by class societies, engine manufacturers and ship owners. Wärtsilä has also tested the system under the Project Hercules on medium speed engine Wärtsilä 6L20CR operating under Miller cycle with a two-stage turbocharger and running on MGO. The tests confirmed improved fuel efficiency with no need for chemical additives.
Blue Ocean Solutions introduced the BOS EFS in 2010 in response to the sudden steep hike in fuel oil prices. Yet, the R& D work goes back to the early 1980’s. Dr Jerry Ng KL, the founder and CEO of Blue Ocean Solutions was one of the members of the team that pioneered the application of emulsified fuel technology to motor ships at the University of Newcastle, U.K.
http://blueoceansoln.com/ 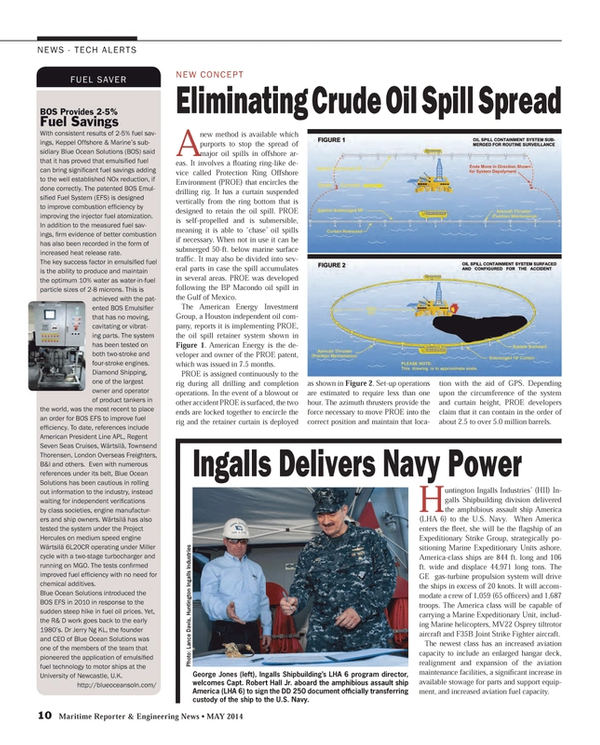