Methanol has a “historic opportunity” as a marine fuel, according to a new report published by research group FCBI Energy. Despite having many attributes that make methanol an attractive, low-emissions marine fuel, it has sometimes been overlooked in policy and industry discussions, according to FCBI Energy, whose report Methanol as a Marine Fuel finds the chemical to be a well-understood and safe to handle as a viable alternative to changing to low sulfur diesel, installing scrubbers or converting to LNG.
The new report, authored by marine energy systems expert Professor Karin Andersson of Chalmers University in Sweden, set out to examine methanol’s viability as an alternative marine fuel. The study found that methanol is abundant, biodegradable (the effects of a spill on the environment are low), compliant with the strictest international emissions standards, and could even be 100 percent renewable.
From a cost perspective, methanol prices show regional variation, and conversion costs are expected to drop dramatically as experience mounts. Moreover, as it is a liquid, methanol avoids the need for the expensive cryogenic equipment required for LNG, the report found. Infrastructure costs are relatively modest compared to potential alternative solutions, and current bunkering infrastructure only requires minor modifications to handle methanol.
In 2015 Stena Line converted Stena Germanica, a large Ro-Pax ship, to run on methanol. “The handling and installation of a liquid like methanol had clear advantages over gas or cryogenic fuels regarding fuel storage and bunkering,” said Carl-Johan Hagman, CEO, Stena Line. “I believe this report can help raise awareness of this marine fuel and serve as an important source of facts to anyone looking for a greener shipping fuels.”
The full Methanol as a Marine Fuel report can be downloaded from the FCBI Energy website: http://1.fc-gi.com/LP=8264.
www.fcbi-energy.com 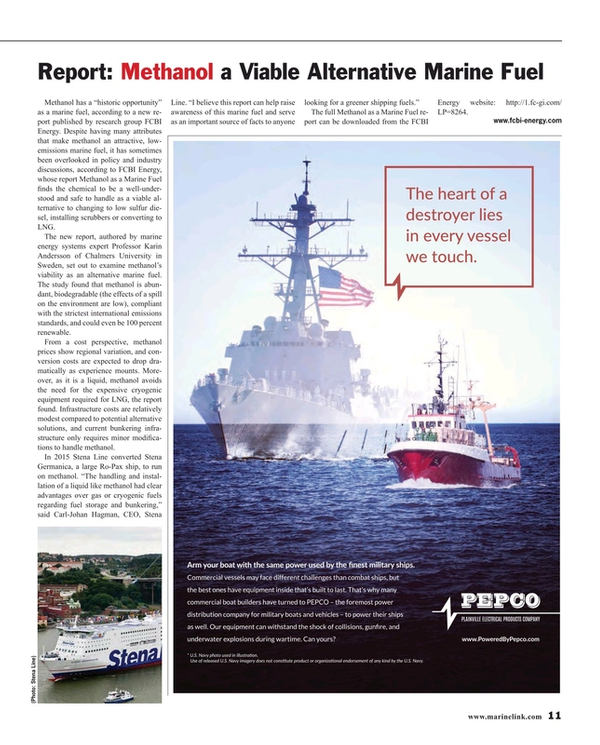