Enseada Shipbuilding was established to build deepwater drillships for Petrobras. Seventy percent of the company is owned by a consortium composed of Brazilian companies, Odebrecht (50 percent), OAS (25 percent), UTC (25 percent), with the remaining 30 percent belonging to Japanese shipbuilding giant, Kawasaki Heavy Industry (KHI). With all the Brazilian shareholders involved in the Car Wash “Lava Jato” operation, investigating corruption and embezzlement schemes with Petrobras, Kawasaki is a key partner, as is it not only responsible for technology transfer and providing professional training for the local workforce and operational consultancy in several areas within the shipbuilding process, as it also offers credibility to the shipyard. Kawasaki is the pillar, which may well guarantee the brand new shipbuilder’s survival.

Brazilian Shipbuilding in Crisis
“In December 2014 there were around 80,000 workers in the Brazilian shipbuilding industry, and six months later at least 15,000 jobs were lost in shipyards throughout the country. By August, we at Enseada Shipbuilding, were forced to lay-off 7,500 workers and this number may reach 9,000. On top of that we have the city of Maragogipe in Bahia, (where the shipyard is located) which had a very quick and intense growth due to the implementation of the shipyard and now finds itself paralyzed,” said Humberto Rangel, Director of Enseada Shipyard.

Sete Brasil
Sete Brazil was created in 2011 for the construction of part of the 29 drillships which Petrobras was to use on its pre-salt drilling campaign, however this number has been cut to 19 drilling units due to Petrobras’ decreased investment plans. Sete Brasil is partnered with banks, pension funds and Petrobras itself. It was dependent on $3.2 billion of funds from the National Development Bank (BNDES), which has decided to withhold the money in the light of Operation Car Wash. Sete Brasil had commissioned Enseada Shipbuilding to build the four FPSOs, at a cost of $800 million each. But with Enseada struggling due to Sete Brasil’s $324 million debt following the Brazilian Federal Police’s Operation Car Wash, Kawasaki decided to persuade other investors in Japan to participate in the project. If the new investors go ahead with the plan, Sete Brasil will no longer participate in these four FPSOs, which Petrobras will instead rent directly from Odebrecht Oil and Gas (OOG) and the Japanese partners.

Enseada Shipbuilding Order Book
Enseada Shipyard has a delivery portfolio valued at $ 6.5 billion, including the conversion of the hulls of four FPSOs for Petrobras, as well as the development of six deepwater drill rigs for Sete Brasil. “Enseada shipyard is investing heavily in state-of-the-art equipment and technology transfer with our Japanese partners from Kawasaki, in order to become internationally competitive. We are working on innovations to the fabrication process through research, to develop new technologies. We believe we can increase our productivity, but the whole production chain, including equipment suppliers, needs to be productive and presently there is little government support for the local maritime equipment production chain,” said Guilherme Guaragna, Vice-President of Enseada Shipyard, during the Marintec South America conference in Rio de Janeiro.

Shipyards
In the Brazilian Northeast state of Bahia, Enseada is implementing the state-of-the-art Paraguaçu Unit worth around $930 million, and is expected to be finalized by early 2016. Designed to develop complex naval engineering projects, using the latest technology, the facility has been planned to match the quality, productivity and technology standards of the best shipyards in the world, through technology transfers and supervision by KHI. It aims to maximize efficiency and minimize waste at every stage of operations. This Paraguaçu shipyard project, in turn, has given rise to actions for the development of the supply chain with the Federation of Industries of the State of Bahia and the Ministry of Development, Industry and Foreign Trade. It represents the largest private investment in the state in the past 10 years.

At the São Roque Unit, also in Bahia, located at the other side of the Paraguaçu River, workers are cutting the plate for the topsides for FPSOs and drillships. The São Roque Unit is located at the São Roque do Paraguaçu Construction Site, established in 1976 and covering an area of 400,000 sq. m. The unit has infrastructure to build modules, drillship topsides, production platforms, FPSOs and fixed steel jackets. It has three finishing docks with a 10-m draft, plus workshops for welding, painting, block assembly and mechanical cutting of steel plates, with a capacity to process 2,700 tons of steel, up to 1,300 employees. Eight topside modules for the drillship Ondina are being built at São Roque.

In Rio de Janeiro, Enseada operates the Inhaúma Unit in the Caju District, leased by Petrobras since 2010. The company has revitalized 97 percent of the facilities, as well as renovating and purchasing equipment, and has performed preliminary services on the P-74, P-75, P-76, and P-77 hulls. The Inhaúma unit in Rio de Janeiro is working on the conversion of four VLCCs into FPSOs. Intended for the “Cessão Onerosa” (Onerous Concession) areas, in the Santos Basin pre-salt, the FPSOs will produce up to 150 thousand barrels of oil and compress up to 7 million cubic meters of natural gas a day at the giant Búzios pre-salt field. The P-74 hull has been in drydock at the Inhaúma unit in Rio de Janeiro for nearly three years. In order to avoid further delays, most of the conversion work on the other two FPSOs (P-75 and P-77) will be done at the Dalian Cosco shipyard in China. It is quite possible that the P-76 will be the first to be launched as it is already docked at the Inhaúma quayside, and the rest of its integration process will be undertaken at Techint’s Pontal do Paraná shipyard, which has been modernized with carbon and special steel pipe workshops, and upgraded integration quays. 15 of the 20 modules contracted to Techint are being built locally, with other structures and modules being imported from Indonesia, Turley and Vietnam.

FPSOs & Kawasaki
Kawasaki and a group of Japanese partners are planning to take over the four FPSOs commissioned by Sete Brasil to Enseada. Last June, Shigeru Murayama (President of KHI), Tomotsu Saito (President of the IHI Corporation), and Seiji Shiraki (President of Mitsubishi in Latin America) met with Brazilian President Dilma Rousseff in the country’s capital Brasília, hoping to ensure the government’s support for the venture. Their efforts were successful, and since then, government executives and executives from the partnership have been assessing the project. If the investment is approved, the Japanese group will assume the 85 percent currently in the hands of Sete Brasil. JBIC (Japan Bank for International Cooperation) is also expected to join the venture.

Drillships
The Paraguaçu Unit is also building six deepwater drillships for Sete Brasil. The vessels will operate in the exploration of the pre-salt reservoirs, at depths of up to 3,000 m. Four of these ships, the Ondina, Pituba, Boipeba and Interlagos, are being built in partnership with Odebrecht Oil & Gas. The other two, Itapema and Comandatuba, involve another partnership, Etesco/OAS. The total value of the contract is of around $ 4.8 billion and these will be the first drillships ever built in Brazil. The drillship Ondina is already under construction, and will be delivered to the client in 2016. The last ship, the Comandatuba, is due for delivery in 2020. 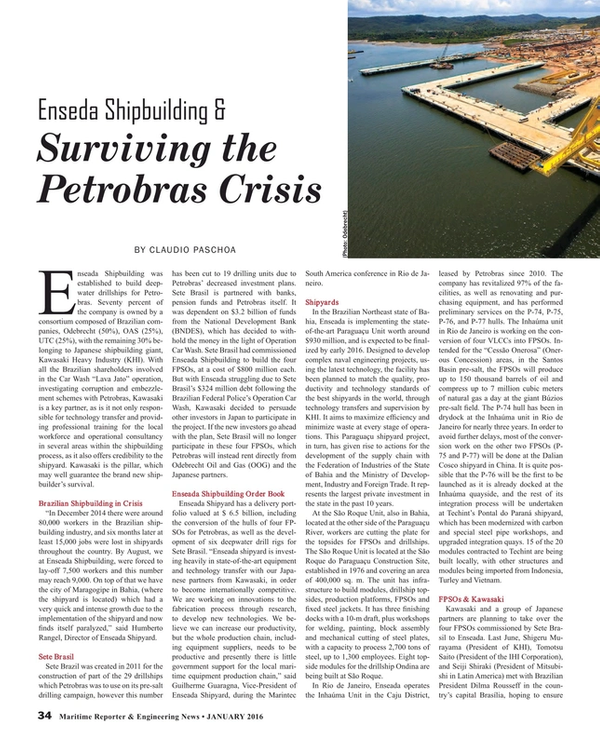