While conservatism is a hallmark of maritime, research from Inmarsat finds that IoT may be helping turn the tech tide by delivering new solutions that ease rather than complicate compliance.

With environmental imperatives mounting, shipping’s hesitation concerning new technology has been laid bare in an Inmarsat Research Program report that includes data on how far the industry sees IoT-based solutions as a gateway to sustainability. Directly out the porthole is the IMO 2020 fuel sulfur cap, but further along is 2050 the target to cut GHG ship emissions by 2050.  In facing the fuel sulfur cap the industry is split between those seeing advantage in developing an environmental edge and those driven largely by compliance.  As far as 2020 is concerned, compliance is becoming the imperative. Recently-published International Chamber of Shipping guidance, ‘Compliance with the 2020 Global Sulphur Cap,’ suggests that companies running ships without Exhaust Gas Recovery (scrubbers) will need to order compliant fuels (0.5% sulfur content) from mid-2019.

ICS also strongly recommends developing ship-specific Implementation Plans as soon as possible. Shipping’s opinion divide on the environment as technology driver is evident among 750 respondents to the Inmarsat research report ‘Industrial IoT on land and at sea’ (2018), which also drew on agriculture, energy, mining, transport and logistics and fishing industry professionals. The data behind the study has been revisited to isolate prevailing attitudes towards the role of the IoT in achieving environmental goals.

Among shipping respondents, the report shows that environmental monitoring is seen by 46% of shipping participants as one of the most important drivers for deploying IoT-based solutions. Around 34% of organizations across the supply chain already see improvements in sustainability through their use of IoT, and 43% expect to do so in future. At first sight, then, experience and outlook of shipping respondents is moderately behind the curve, with 30% characterizing their organizations as achieving sustainability benefits by deploying IoT-based solutions, and 42% expecting to do so.

However, dig a little deeper, and shipping’s unremarkable level of recognition of the IoT as an enabler for sustainability overall is exposed as disguising its notorious divide between technology progressives and laggards. Progressives are already showing themselves attuned to using IoT-based solutions as strategic tools to improve efficiency and enhancing energy usage. However, the new research shows that the maritime industry – like no other constituency – includes 14% of respondents who say that sustainability is not even one of their organisation’s aims for IoT deployment.

In the cost-conscious world of shipping, it is surely more than coincidence that 14% of maritime respondents also believe that, even five years out, there will be no savings at all resulting from the adoption of IoT-based solutions. By way of comparison, some 54% of peers in the mass transit and inland distribution industries identify improving resource efficiency as a primary driver for IoT adoption. In fact, left to their own devices, shipping respondents overall cite health and safety more often as an IoT deployment driver (in 54% of cases), and they do so in greater numbers than the wider transport group (50%) or respondents overall (46%).  However, as one of the world’s most heavily regulated industries and as outlined above, shipping is seldom if ever left to its own devices. Perhaps one of the most interesting findings in the new report, therefore, is that it shows environmental regulation working strongly in favor of IoT deployment. Where only 19% of respondents overall categorized meeting regulations as a main driver for IoT deployment, shipping respondents cited it as a main motivator in 39% of cases – the highest proportion given by any group.

The IoT at Land and Sea report establishes that, despite its foot draggers, 47% of shipping respondents are collecting data for the purpose of environmental monitoring: this compares to 40% of respondents across the supply chain, and the same figure (40%) among wider transport industry respondents.

With 69% of maritime respondents in the current survey counting themselves as reliant on satellite connectivity to support their IoT-based solutions, Inmarsat is a proactive partner in addressing fuel efficiency. Notably, the satellite group has been working with Rolls-Royce to make the latter’s Energy Management system available via Fleet Xpress. Recently, the satellite group also introduced Fleet Data, whose connectivity via the ship’s VDR will enable real-time data analysis and decision-making, addressing a key point of resistance to IoT-based solutions identified in the Inmarsat report.

Nevertheless, shipping’s distinctly average enthusiasm overall for sustainability as a driver for IoT deployment contrasts strongly with the regulatory impetus to monitor fuel consumption that sees 65% reporting that they already use IoT-based solutions. An additional 9% say they will do so within a year while, in an apparent commitment to meet regulatory obligations, deployment is projected as reaching 100% by 2023.  The preparedness no doubt reflects the fact that shipping is already required to meet the EU MRV (Monitoring, Reporting and Verification) scheme, while Fuel Consumption Reporting within the IMO Ship Energy Efficiency Management Plan is not far behind. By April 2019, and by the same month in subsequent years, for example, verified annual emission reports must be submitted for every ship above 5,000 gt to the EC and the relevant flag state. 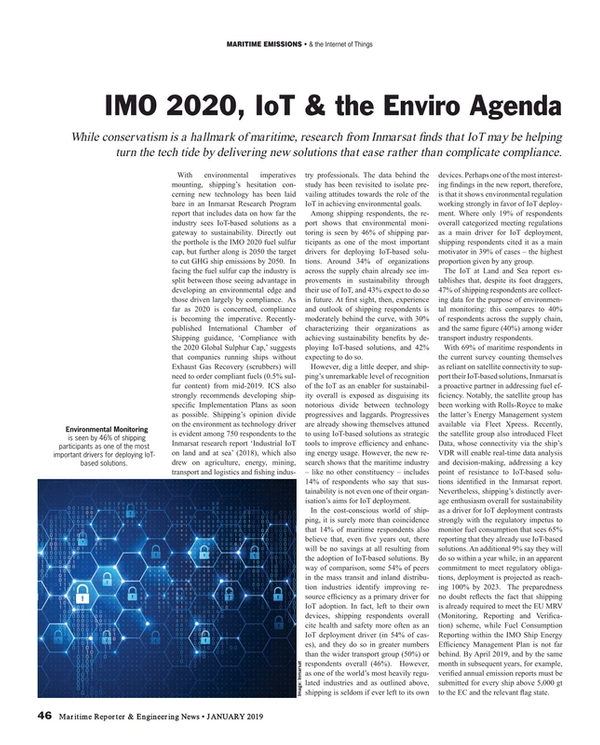