“We are thrilled to introduce yet another revolutionary hybrid-powered expedition ship,” enthused Hurtigruten’s CEO, Daniel Skjeldam. “This groundbreaking vessel will take our guests to some of the most spectacular areas of our planet, in a more sustainable and environmentally-friendly way than ever seen before,” he stated.

The new ship’s design, construction, engineering and advanced technology will be based on Hurtigruten’s two next-generation ships, MS Roald Amundsen and MS Fridtjof Nansen, currently under construction at the Kleven Verft yard in Ulsteinvik, Norway.

The new expedition ship, accommodating 530 guests, will be custom-built for some of the most extreme conditions to be encountered, having a specially-designed, ice-strengthened hull and expected to be delivered in Q2 2021. Hurtigruten is introducing the MS Roald Amundsen and the MS Fridtjof Nansen, the world’s first hybrid battery-powered cruise ships, in Q1 and Q3 2019, respectively, with the new third hybrid powered expedition vessel expected to be added to the company’s fleet in 2021.

“These are greener, more advanced cruise ships than the world has ever seen – and ships that will raise standards for the whole industry to follow as we enter a new era of expedition cruising driven by sustainability,” said Skjeldam. Among the innovative green features on the new ship are substantially larger battery packs to make expedition voyages even more sustainable.

“We strongly believe that Hurtigruten, and our responsible and innovative approach to sustainable solutions, is the perfect fit for the modern-day explorer. Hurtigruten is experiencing substantial global growth. The expansion we have seen so far is just the beginning,” said Skjeldam. 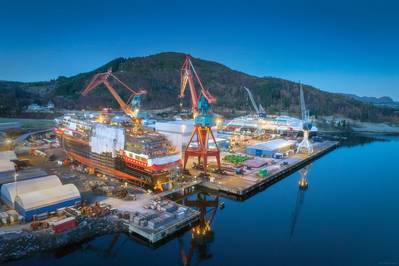 The Kleven Verft AS shipbuilding yard (right) in Ulsteinvik, Norway is the construction site for Hurtigruten’s next-generation ships.
Photo: Kleven Verft ASFish power
As well as introducing its three new hybrid battery-powered cruise vessels, Hurtigruten is refitting its current fleet of ships to make them less polluting and is planning to use a by-product of rotten fish to help power their new, leaner engines. In a $826 million, three-year investment,
the whole of the company’s fleet will be adapted for greener operations, with six of its older vessels being retrofitted to run on a combination of liquefied natural gas (LNG), batteries and liquefied biogas (LBG).

“We are talking about an energy source from organic waste, which would otherwise have gone up in the air. This is waste material from dead fish, from agriculture and from forestry. Our main aim is to reduce and cut out emissions,” said Skjeldam.

The shipping sector is facing tougher international regulations, including cuts in carbon dioxide emissions by at least 50 percent by 2050 compared with 2008 levels, and a ban on fuels with sulfur content above 0.5 percent from 2020 against the current limit of 3.5 percent. Hurtigruten has said that it wants to be carbon-neutral by 2050: “We definitely have to be there in 2050 as a company and the cruise industry must definitely have to come a long way as well,” said Skjeldam, adding that Hurtigruten’s three new hybrid-powered ships, which will run on batteries with a diesel engine for back-up only, will help the company market itself as a green cruise company, and that this will be especially useful given that its ships sail through vulnerable eco-systems.

“The changes in the Arctic over the past 20-30 years are not caused by carbon dioxide emissions in the Arctic, but you can see the effects of the emissions elsewhere in the world first in the Arctic,” he said. “Our crews have seen glaciers retreat and plastic waste on beaches where they land.”

Adding to the company’s green credentials is Hurtigruten’s ambition to become the world’s first plastic-free shipping company. The company has already banned single-use plastic and items ranging from plastic straws, drink mixers, plastic cups, coffee lids and plastic bags have all been removed from its ships. “At Hurtigruten, we have focused on the problem of plastic pollution for years. There is a lot of talk about the impact plastic has on our oceans. But it’s time to take action.” said Skjeldam.

An estimated 15 metric tons of plastic ends up in the world’s oceans every minute of the day. If this trend continues, this number will double in the next 10 years, meaning that, by weight, there will be more plastic than fish in the oceans by 2050: “Plastic pollution is the single biggest threat to our oceans” said Skjeldam.

“Hurtigruten operates in some of the most vulnerable areas in the world. This means that we carry a special responsibility to protect these areas for the local population and future generations of explorers.”

Hurtigruten’s single-use plastics ban will be effective across its entire fleet of custom-built expedition vessels and will also be imposed on the hotels, restaurants and other establishments that make up the company’s land-based operations on Svalbard. These are operated by the company’s fully-owned subsidiary, Hurtigruten Svalbard. 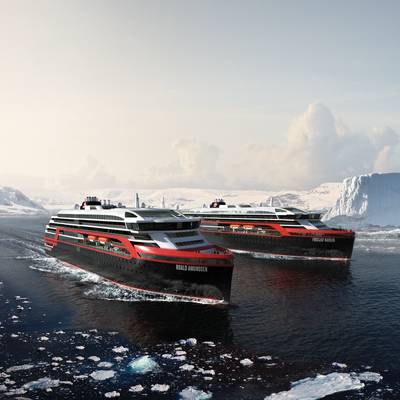 An artist’s impression of Hurtigruten’s MS Roald Amundsen and MS Fridtjof Nansen, the world’s first hybrid battery-powered cruise ships due for delivery in 2019: a third such vessel will be added to the company’s fleet in 2021. Photo: HurtigrutenChallenge to suppliers
In addition to the its internal ban on single-use plastic, Hurtigruten is challenging all its suppliers to reduce and cut the use of plastic:
“No one can win the war on plastic alone without allies. This is why we implement high demands on our suppliers. Our goal is to become the world’s first plastic-free shipping company and this is our first step,” said Skjeldam. In addition to the introduction of its ban on single-use plastic, Hurtigruten is advocating a ban on HFO and stricter regulations to be applied to vessels that operate in ‘pristine’ destinations. In support of its position, the company is involved in environmental research, and funds both local and global projects through the Hurtigruten Foundation.

New guest experiences
Hurtigruten is expanding its greenest expedition cruise program with a number of new and unique destinations. From 2020, guests will be able to explore the Alaskan wilderness on board the MS Roald Amundsen, while the inaugural season of its sister eco-friendly ship, the MS Fridtjof Nansen, will explore the unspoiled beauty of Antarctica, Greenland, Iceland and the Norwegian coast. In addition, a complete makeover for one of the company’s most popular cruise vessels, the MS Fram, will see it emerge as a brand-new expedition ship. However, the most notable development within the company’s cruise program will be the addition of a series of expedition cruises to Alsaka, starting in the summer of 2020. This represents another first for the company and the expedition cruise market, with the MS Roald Amundsen having been chosen as the operative vessel for this new route, concluding its 2020 Alaska season by conducting an epic North-West Passage transit from Nome, Alaska via Greenland to Halifax, Nova Scotia. Hurtigruten also has plans for cruises to even more new destinations, including South America, Antarctica, Svalbard and Russia.

The new technology on board its newest expedition cruise vessels is designed to take the Hurtigruten expedition cruise guest experience to a new level, with the centerpiece being the tallest LED screen at sea, having a height of 17.5 meters and spanning seven decks. It will be located in the ship’s atrium beside the main guest entrance and will show live broadcasts transmitted from outside the ship.
Facing the three all-glass elevators, the screen will reach up to and include Deck 10 of the eleven-deck vessel, the state-of-the-art LED technology, with a screen resolution beyond 4K Ultra-HD, providing a seamless and borderless display.

The guest experience will also be enhanced, according to Skjeldam, by the ship’s modern Scandinavian design, with features ranging from the high-tech Amundsen Science Center, several observation decks, an infinity pool, a panoramic sauna, wellness center, three restaurants, a number of bars, the Explorer Lounge, and aft-facing suites with private outdoor hot tubs.

Hurtigruten has also announced that the world’s first captain of a hybrid expedition ship will be Captain Kai Albrigtsen (54) who will be at the helm of the MS Roald Amundsen when the ship embarks on its maiden voyage in May 2019. Albrigtsen has held a number of different positions on board more than ten Hurtigruten vessels and completed his first expedition to Antarctica in 2003. He rose to the rank of captain in 2006. 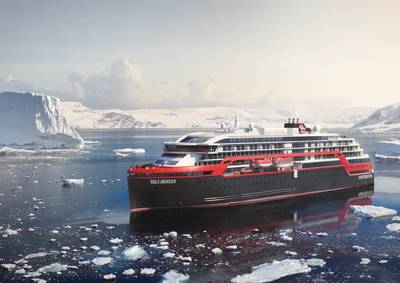 The MS Roald Amundsen has been chosen as the operative vessel for Hurtigruten’s 2020 Alaska expedition cruise season which includes a North-West Passage transit from Nome, Alaska via Greenland to Halifax, Nova Scotia. Photo: Hurtigruten 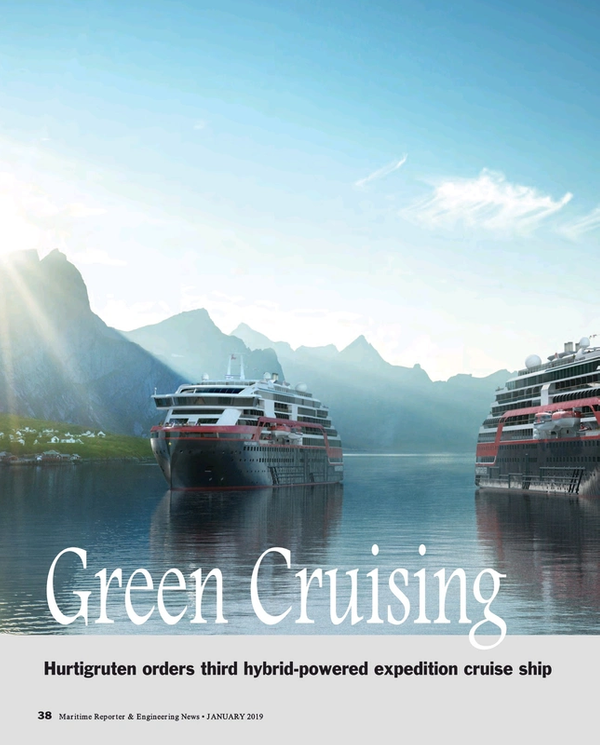