(This is excerpted from Maritime Reporter & Engineering News' January 2020 "The Path to Zero" column.)

You might think that given the length of time to prepare – since 2008 – shipping experts and engineers would have a clearer picture about new fuels and marine engines and operability.  That newer engines and systems, for example, might fare better than older equipment.  Or that trial runs so far are proving optimistic – we can do this.  Or even a rather grim warning: there aren’t any general conclusions – every singular engine and vessel and captain and crew face their own at-sea tests.

“The risk of a spate of engine failures across the world in 2020 is currently keeping marine engineers awake at night.”

That pessimistic assessment was written by Jack Jordan, a researcher with S&P Global Platts.  Jordan’s comments are part of an extensive S&P report titled “Into the storm: How will shipping cope with fuel bills from IMO 2020?,” published last May.  In December, Jordan’s concerns continue.
Jordan explains that marine fuel will shift from a historically limited offering – heavy residual fuel oil (HFO), with relatively predictable and constant properties – to a much wider range of new and unfamiliar distillate products.

The new fuels “could range from a largely unaltered low sulfur straight run fuel oil to a primarily distillate-based product, or use other refinery streams including VGO and hydrocracker bottoms. The trouble will come when the products are mixed and some blends prove incompatible with one another: when a more aromatic 0.5% product comes into contact with a more paraffinic blend, the products are likely to separate and form sludge, blocking filters.”

Concerns with endless singular challenges may prove correct.  This scenario is described, in detail, in a document titled “The supply and use of 0.50%-sulphur marine fuel” published as a “Joint Industry Guidance” by a host of trade groups, including the African Refiners Association, International Bunker Industry Association and the International Council on Combustion Engines.  And I probably should mention the International Union of Marine Insurance.  (Better check your policy.)

The guidance covers fuel issues from bunkering, segregation, testing and, finally, combustion.  It’s a sobering review.  Every aspect of a ship’s fuel operations needs a re-look as well as new and revised crew training.  These will be specific challenges on each ship.  Don’t expect helpful, broad-brush advisories or sector-wide how-tos.

The guidance advises that even crews familiar with fuel switching, say, when entering a coastal ECA (emissions control area), will need additional training to work with the new fuels.  The Guidance advises that a systems evaluation should cover “different grades of fuels, and the issues and dangers that are associated with switching over while maneuvering, during long idle times and while starting engines in port. Potential hazards include, but are not limited to, loss of propulsion, blackouts, failure to start the engine, and fire and explosions.”

More pointedly, the guidance tells that “the issues related to fuel switching are unique to each ship and its condition, so there are no universal procedures that can be applied to all, or even most ships.”  Nevertheless, there are some general principles and procedures for the majority of ships.  Recommendations include:

•Establish procedures, plans and instructions for key shipboard operations concerning the safety of the personnel, ship and protection of the environment.

•Ships that have never changed over fuels need to practice in advance.

•New crew members need to be trained before working on fuel switching.

•Avoid situations that jeopardize the safety of the ship, e.g. distance to the coastline and the density of traffic.

The guidance includes a separate section for the use of 0.50% fuel in boilers used primarily on board LNG ships and medium pressure boilers on tankers used for cargo tank heating and cargo pump operations.  The main boilers onboard LNG ships were originally designed based on dual fuel firing with both HFO and heated LNG vapor.  Again, an extensive list of cautionary advisories.  The new, distillate fuels can impact or degrade boiler combustion systems.  Equipment newly at risk includes:

•The size and specification of burner fuel supply pumps. 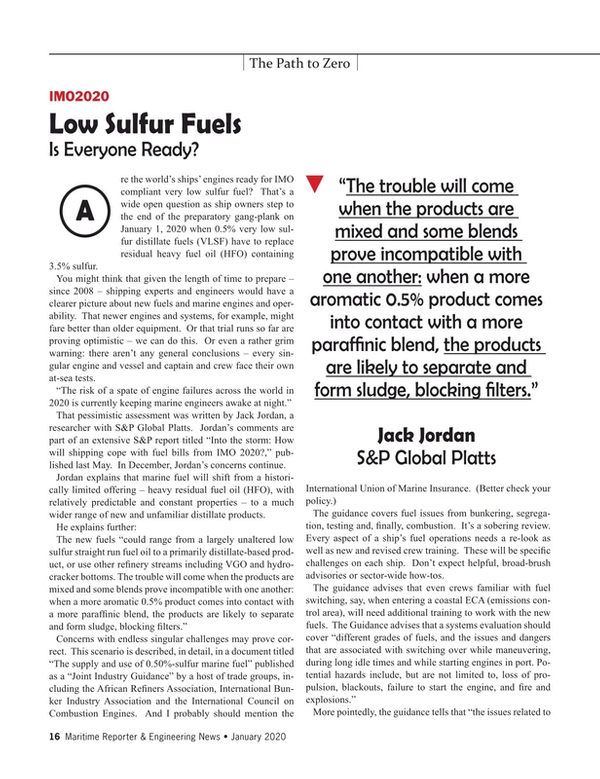