Are OSVs Fit for Refit for Offshore Wind?

While it is generally agreed that the nascent offshore wind energy market in the U.S. will be a newbuild market, there is a repair and conversion possibility for some stacked OSVs.

Though estimates on the pace of the offshore wind energy market in the U.S. vary widely, the direction is clear: offshore wind will be a huge marketplace for construction and support vessels to be deployed in U.S. waters over the next decade. The starting point for estimated vessel demand is the raft of projects along the U.S. East Coast, and to a lesser extent, in the Pacific waters, now in the pipeline.  Though offshore wind presently accounts for a paltry 30 megawatts (MW) of actual power production (five turbines of 6 MW each off Block Island, RI), the Business Network for Offshore Wind estimates the size of that U.S. pipeline at somewhere around 8.5 gigawatts (GW) based on announced projects likely to come online through the mid 2020s. An estimate by DNV-GL suggested that in excess of 9 GW could be operating by 2027. Extrapolating further into the future, Tim Axxelson, Project Director at MHI Vestas, a developer of offshore wind projects, provided an estimate  of 26 GW of offshore wind capacity online in U.S. waters 15 years from now.

These power production estimates imply a certain number of energy producing turbines needing to be constructed and serviced.  Turbine capacities are now creeping toward 12 MW each, and the size is expected to rise further in coming years. A fairly rudimentary back of the envelope calculationsuggests that 8.4 GW of capacity implies 700 turbines, based on a 12 MW/turbine average. Much like oil patch OSV vessel count is derived from numbers of exploration rigs and producing platforms, the estimates of implied demand for offshore wind vessels can be developed.  In a recent presentation Axelsson suggested that 48 additional U.S. crew transfer vessels (CTV) would be needed, along with 15 new U.S. built service vessels (with a “walk to work” type gangway).  Other vessels in the mix include cable laying vessels (and other vessels for subsea servicing) and a new category – variously described as “guard” or “watch” vessels – reflecting the concerns about security as the electric grid becomes more dependent on offshore wind.

These calculations and estimates provide a backdrop for the question on everyone’s mind – where exactly will all these vessels come from?   Activity in the oil patch has waned since crude oil’s price slide of 2014, so many vessels that are surplus to the needs of offshore oil exploration and production are potential conversion candidates. Some categories of OSVs are experiencing marketed capacity utilization barely exceeding 50%. There is no “one size fits all” answer to questions of whether conversion (with a subsequent move from the Gulf Coast up to the East Coast) would actually make sense. The answers are very nuanced and the experts don’t always agree. 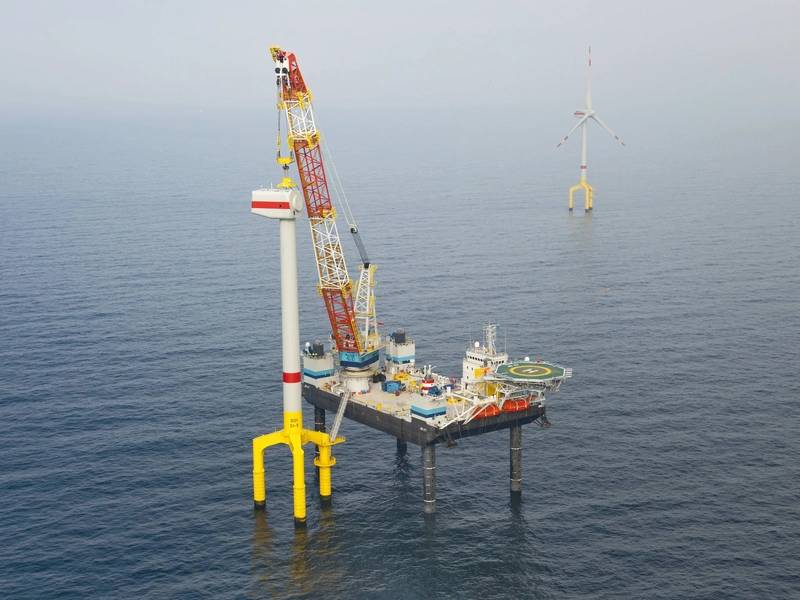 Consider CTVs; Luther Blount, from the Rhode Island-based Blount Boats (which built a crew vessel for Block Island Wind) said that “vessels of opportunity could be a disaster,” adding that “…there is a reason that these boats are purpose built (and there could be) a lot of downtime if they are not built properly.”  Blount Boat has recently announced an order for two CTVs that will serve East Coast wind projects, to be delivered in 2020.
Conversions of such vessels are at the low end of complexity spectrum. Naval architect  Ajay Suda of Metarie, La.-based A.K. Suda Inc. told Maritime Reporter & Engineering News that “crew boats could be converted very easily…” for use in the wind patch (where demand will ramp up around 2023) and that platform supply vessels (PSV), especially those with cranes already installed, could also be converted into service vessels where  a  W2W (walk to work) type gangway could be retrofitted.  Nian Hua Lim, President of ST Engineering Halter Marine and Offshore, told Maritime Reporter that “larger PSVs will be suitable for conversion for use in offshore wind.”

The European experience, which is more than a generation ahead of the U.S. when it comes to offshore wind, also provides guidance.  DNV-GL’s Arnstein Eknes, Segment director Offshore Service Vessels and Special ships, said in a recent presentation, that: “Windfarm Service Operation Vessels (SOV) are being tailor-made, and some are converted PSVs with Accommodation & W2W systems.”

Island Offshore, based in Ulsteinvik, Norway, has had success with conversions.  Island Offshore Managing Director, Tommy Walaunet, told Maritime Reporter, “as owners we always look for opportunities to increase the attractiveness of our vessels. In this context, modern PSVs can be converted and utilized for new operations at a competitive cost compared to new buildings. We expect new building prices to be high going forward thus it makes sense to develop our existing fleet.”

A host of factors may militate against straightforward conversions.

Halter’s Lim said that rules governing “passenger” counts may limit non-vessel crew members to 12 or 16 (short of the 30 to 60 technicians who might ride out to service turbines). He added that improved safety features, including lifeboats, would be necessary in a conversion and that personal comfort is also an issue, where crews might be living aboard (rather than being transported out to a platform). An interface on the bow for connecting to a platform or wind turbine was identified as a further necessity. W2W and cranes also present challenges, “…they must be heave compensated…” said Lim. Halter also stressed the importance of good sea-keeping abilities, saying that PSVs of 60m or greater would be needed in U.S. waters, with Lim adding that dynamic position (DP) capabilities could be added.

However, as always the price tag is at the forefront, particularly as some of the higher ticketed items push the retrofit price into the range of a fit-for-purpose newbuild. The timing of construction and conversion also plays a role, with Lim saying that conversion times could range from three to four months  “…if you plan well…” out to nine months. Where the project requires a quick turnaround, conversions might make sense. “A newbuild might take 24 months, which is more suitable for longer timeframe project,” he said.

… and then there’s the Jones Act …
The future growth of the U.S. offshore wind energy market and the impact to the U.S. marine market as a whole was the topic of a presentation hosted by the American Bureau of Shipping (ABS) in New Orleans in early December (See related story, page 14). And there are no discussions of the U.S. maritime market that don’t start and end with the Jones Act.

Offshore construction vessels present a different set of challenges, with the Jones Act looming large in the minds of all participants. Presently, there are no Jones Act qualified vessels suitable for offshore wind construction, and solutions have included hiring a foreign lift vessel (stationery on the seabed) and then ferrying components out from coastal ports on U.S. assets that  designers have called “super-barges”.

Such vessels (if available in the marketplace) may be pressed into service as projects come online in the 2020s. However, with a booming demand pipeline, market participants expect U.S yards to build Jones Act compliant construction vessels capable of picking up components from onshore facilities, and also doing the assembly.

With larger blades, heavier turbines and taller towers, the experts could offer little incentive to convert or reconstruct existing construction vessels. Suda, from A.K. Suda, explained that conversion of a U.S.  jack-up or lift vessel would be possible technically, but not feasible financially. In discussing super-barges, he explained that such barges would require legs for stability when offloading components, and would be very expensive with a jacking system outfitted. “At the end of the day,” he said, “the owner would have an expensive vessel, with a limited remaining useful life.” Lim, from the Halter engineering arm, also pushed back on re-outifitting of existing vessels, pointing to less than ample deck capacities on existing conversion candidates. “Installation vessels will also need thrusters,” he said.

Maritime Reporter spoke with Erwin Lammertink, the CEO of Van Es Holding BV (the Netherlands parent of Jack-Up Barge, Swift Drilling and other providers of offshore construction equipment) about the feasibility of converting existing rigs into installation vessels for the installations of the ever growing towers, turbines and blades. Its self-elevating jack-up installation vessels, working extensively in the North Sea, have lift capacities of several hundred tons, with one rig, JB-117, able to lift 1,000 tons. He notes that: “The growth of turbines has been significant. A huge investment would be required to upgrade units; these are not impossible but there are huge challenges.” He suggests that “…for the long haul, the best way is build to suit….however for assignments with a nearby time-frame, look at assets like the JB-117, or a near sister- JB-118- with a lift of 1,000 tons, which today are being upgraded with DP2.”

The European experience is important, but it is only a starting point. A representative from Windserve (a unit of Reinauer Transportation that is building two CTVs for work offshore North Carolina and New England, and is tendering for other deals), during a recent presentation in New Orleans, opined that, “Because of the Jones Act, we will see some ingenuity and some new approaches.”

U.S. Jones Act suitable arrangements are already here. A.K. Suda, who has developed configurations for ABS classed high-spec lift boats deployed across multiple oil basins, has reworked its designs for the offshore wind sector. The Suda JG10000 design, offers a 2000 ton lift capability, the ability to handle  eight x 8-9.5 MW turbines, or six x 10 MW turbines, or four x 12 MW turbines with accommodation for 112, in depths up to 68 meters. Ajay Suda offered that:  “One of the great myths propagated has been that U.S. built Jones Act assets are going to be prohibitively expensive. The price is comparable with European designs built in Asian yards. 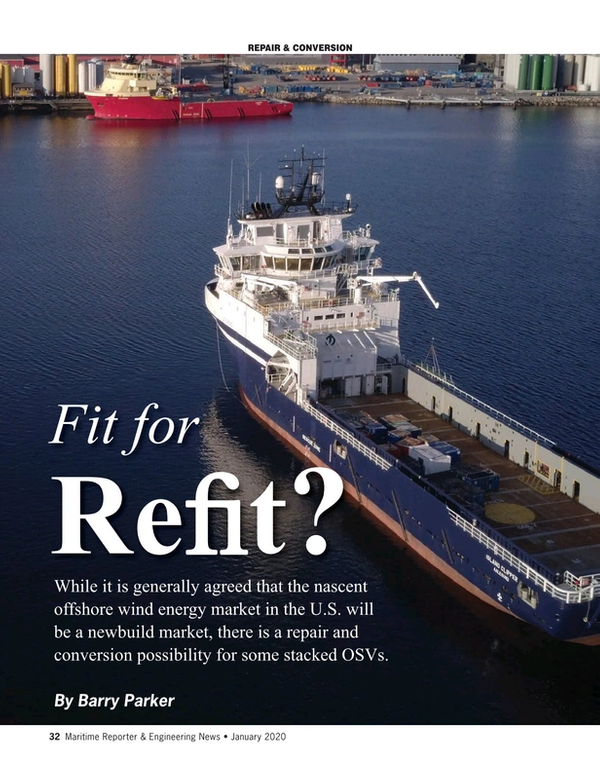 Read Are OSVs Fit for Refit for Offshore Wind? in Pdf, Flash or Html5 edition of January 2020 Maritime Reporter