Ballast water treatment equipment manufacturer Hyde Marine provides systems for all sizes and manners of vessels, but increasingly, the U.S.-based subsidiary of Calgon Carbon Company is being recognized for its work with offshore operators – here and abroad.

Hyde Marine has long been active in the worldwide effort to control the spread of aquatic invasive species in ballast water. Early on, Hyde supplied the first fully operational shipboard Ballast Water Treatment system. In 2003, after requirements were better defined, Hyde installed a state-of-the-art filtration and UV disinfection system aboard the Coral Princess. This system was tested extensively on land-based installations and on board the Coral Princess in the fall of 2004. The on-board tests demonstrated the Hyde Guardian’s capability to meet the IMO BWT Convention requirements.
The U.S. Coast Guard is now moving towards certification of BWT systems. This can take the form of an Alternate Management System (AMS), which gives a five year temporary window for flag approved systems, or permanent type approval. USCG Type approval will require biological laboratory testing and shipboard tests as well. Applications for approvals will take about 60 days to get a verdict. The five-year period is designed to provide the BWMS manufacturer time to obtain USCG approval. Any vessel using an AMS must still comply with the terms and conditions of the U.S. EPA Vessel General Permit (VGP). The proposed 2013 VGP already contains discharge limits similar to the IMO D-2 standard.

Hyde Marine’s Solution: Simple, Certified & Compliant, too
Today, Hyde could be one of the first in line to receive the Coast Guard’s new AMS certification. Two applications will be sent out within a month. For Hyde, its IMO testing will be conducted through G-8 and they may have to do additional testing. Hyde is actively preparing for both possibilities. Hyde’s Guardian Ballast Water Treatment Systems have IMO Type Approval for capacity from 60 to 6000 m3/hr. A Type Approval Certificate has been issued by Lloyd’s Register on behalf of the UK Maritime and Coastguard Agency to confirm compliance with Guidelines contained in IMO resolution MEPC.174(58).  Other certifications include ABS, Dutch Flag State, Russian Maritime Registry of Shipping, DNV (Hazardous Area Certification) and DNV EC-Type Examination Certification.
Hyde’s Guardian features a two-stage process: stacked disk filtration to remove sediment and larger organisms; and a UV disinfection unit to kill or inactivate smaller plankton, bacteria and other pathogens. During ballasting, water is processed through both filter and UV stages. All captured solids and organisms are discharged during backflushing to the location they entered. During de-ballasting, the filter is bypassed and water flows only through the UV system before discharging overboard. Hyde Guardian system and ballast operation data are automatically logged and Hyde provides guidance on the design/installation of sampling ports in accordance with IMO G2 Guidelines.
With over 225 BWT systems already sold into the marine markets via about 180 ships, Hyde is well known in blue water shipping as a top tier provider of BWT solutions. But, Hyde has also sold as many as 75 systems to Offshore Supply Vessel (OSV) owners and also sells to a myriad of other smaller platform operators as well. In fact, Jim Mackey of Hyde Marine told MarineNews in February that about one half of Hyde systems sold to date have been placed onto OSV’s and smaller sized – less than 300 foot – vessels. These include tugs, research vessels, fishing vessels, dredges and private passenger vessels. Mackey said, “We don’t want to be buttonholed into just one market, but we are very effective in serving that sector and it is certainly a big part of our business.” He added, “Success has made us an expert in that area.”

Relationships: Why PG Marine?
PG Marine Group is one of the more easily recognized names in liquid cargo systems for the global OSV fleet. The core of PG Marine’s business is pumps, and pumping systems for the oil and gas sector, in particular those sophisticated systems used by offshore service providers. PG started screening the BWTS market when the first products were being IMO Type Approved. Early on, it became clear that they had to narrow down to technologies which target the market’s demands. These include low CAPEX, low OPEX and flexibility in installation.
According to Roy Norum CEO of PG Marine Group, “It was clear to us that Hyde Guardian met the criteria at an attractive profile to PG’s market approach.” Norum also said that PG gave early commitment to Hyde to high market shares within the Norwegian shipping market regionally, and the Global OSV Market internationally. PG has since then represented Hyde exclusively for these market segments.
Since then, PG has built fabrication, testing and packaging capacities and secured contracts for newbuilds and retro-fits for Hyde for about 75 vessels. To date, PG has secured 7 BWTS units in the US market. Norum went on to say, “We are currently negotiating major fleets-accounts and expect to significantly increase volumes of delivery during 2013.” And for those operators worried about whether they will be able to secure BWT systems in a timely manner as the installation deadline approaches, Norum has news for them. “PG is currently building a new 94,000 square foot fabrication facility in Norway, in which an initial BWTS fabrication capacity of 400 units is secured annually.
The PG philosophy includes making the BWT installation process as painless as possible. Norum added, “We are currently down to one to two days of commissioning after installation, and even train larger customers to commission their own units to ‘ease the pain’ of early installation, as we all await IMO’s ratification.” Norum is certain that, in the next few years, PG will be the largest contributor in number of BWT systems delivered for Hyde. He may be right. And, that’s because one major advantage in targeting the OSV market is that it is arguably the only really strong shipping (in terms of BWT alone) market in these difficult times.
In short, PG Marine Group knows the OSV markets well. And since many operators want to use the same pumps for cargo as they employ for ballast water handling, the relationship between PG Marine and Hyde becomes clearer. Marketing a turnkey solution to those contemplating new build projects but also standalone Hyde systems to those looking at retrofits, PG Marine also has the in-house technical and engineering expertise to meld the Hyde solution into one of their own systems, or conversely, an existing ship already in service. PG Marine Group, therefore, is a close technical and business partner for Hyde, acting in certain cases as Hyde commissioning engineers. Rather than just shoehorning any solution onto a particular hull, PG Marine and Hyde work together to provide a seamless, integrated approach, leveraging the strengths of both groups into a predictable outcome backed by global service.

BWT for OSV’s: Why, and More Importantly, How?
Increasingly, OSV owners are starting to look at BWT systems for newbuild projects. That makes a lot of sense on many levels. For one, it is far more expensive to retrofit BWT onto an existing hull than it would be to design and properly plan installation during the newbuild process. That’s not to mention the additional cost of downtime and lost daily revenues during the retrofit period. Beyond this, the uncertainty of what the Environmental Protection Agency’s final Vessel General Permit (VGP) will call for in terms which sized vessels must comply has many owners stepping up in advance of the final rule language to ensure compliance, no matter what the rule says. That, and many owners simply want to run as green an operation as is possible.
The ultimate challenge for OSV solutions is the obvious lack of space on board these highly specialized, but compact workboats. Normally, there is plenty of power, but the available space to place BWT equipment can be more than 15% less than what might be available in the typical VLCC pumproom. To that end, PG Marine and Hyde provide 2D and 3D design-modeling, physical engineering on board, prefabrication and the flexibility that Hyde’s BWT solution can be split and built into clusters, lines, L-shaped formations or even stacked. And while the physical footprint of Hyde’s equipment isn’t the smallest in the industry, it might just be the most flexible in terms of how it is placed on board a vessel.
While retrofits can involve more money, time and complications, they can be done. Hyde, through its partnership with PG Marine, has been involved in its fair share of this type of installation. As a baseline, careful planning is at the heart of any BWT retrofit operation. The OSV Olympic Zeus installation – sold through PG Marine – is a perfect example of one such job. Tight spaces, the need for a compact physical footprint and a simple design were all part of the winning package.
Operating in today’s OSV markets, however, requires savvy that extends far beyond simple cost comparisons of systems. Owners who want to be in a position of being able to quickly reposition a vessel from one are to another also need to know that ballast water compliance issues may come into play. And with OSV day rates commanding breathtaking six figure magnitude for some specialties, operators do not want to lose even one day of fees. And, in the not-too-distant future, the difference in securing an oil major’s offshore support work and losing that work to a competitor could well come down to which operator has the best, most environmentally sound and compliant equipment on board.

Hyde Marine, PG Marine, & OSV’s, too: A Tight Package
As more and more U.S. OSV owners start to think about ballast water treatment, long term and reliable service, experience and a compliant product will just be three of the metrics they will insist upon. If so, then some will have to look no further than U.S.-based Hyde Marine, its global partner in PG Marine Group and the combined experience represented by their business relationship. For its part, Hyde Marine’s approach with one of its most important client sectors – the offshore service vessel operator – is to sell them on a package that (a.) lowers risk, (b.) lowers the cost of operations and (c.) promises long term support. For more than 75 of Hyde’s OSV customers (and counting), that’s been a winning combination so far. 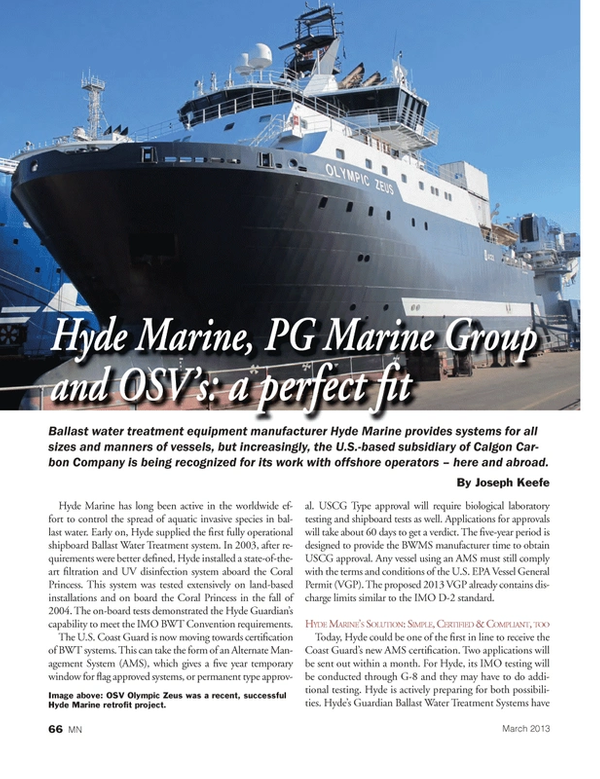