The Atlantic Intracoastal Waterway awaits the chance to rescue the crowded eastern seaboard with a readymade alternative to the parking lot known simply as I-95.

The Atlantic Intracoastal Waterway (AIWW) extends 1,200 miles from Norfolk, Va. to Key West, Fla.. That much is common knowledge. What you may not know is that the U.S. Congress authorized the creation of the AIWW in 1919 and the entire waterway was completed in 1940. Consisting of natural inlets, salt-water rivers, bays, and sounds; others are manmade canals, the canal is included on the National Register of Historic Places and is designated a National Civil Engineering Landmark. Nevertheless, the waterway’s potential to become a key piece of the nation’s intermodal equation is largely being wasted due to federal indifference, poorly designed policies and shoaling that threatens even basic navigation in critical locations along its length.
A key voice of the Waterway is the Atlantic Intracoastal Waterway Association (AIWA) which represents the interests of commercial and recreational users of the waterway. AIWA is the only organization dedicated to ensuring the future of the AIWW and its members notably hail from 39 states and Canada and include both commercial and recreational users. At the recent National Waterways Conference held in Savannah, Ga., AIWA Executive director Brad Pickel brought industry stakeholders up to speed on the condition of the AIWW, its future and also gave them a primer on what it could become. Bottom line: it’s not all bad news, but it is definitely an unfinished work in progress.

November 2013: SITREP AIWW
The U.S. Army Corps of engineers (USACE) is responsible for maintaining the AIWW. That’s about where their involvement ends, however, since there is little enough money for higher profile projects – like, for example, the Olmsted Locks & Dams – never mind finding cash to dredge a waterway that has, up until now, little to show for itself in terms of ton-miles for cargo.
The AIWW serves Virginia, North Carolina, South Carolina, Georgia and Florida. Over time, the Waterway has proven itself valuable for commercial, military, recreational and dredging industry traffic, generating billions of dollars of commercial, recreational and personal income annually. While the authorized depth for most of the AIWW is 12 feet, there are areas that can be as low as 2.5 feet, creating serious navigation safety issues. The lack of maintenance dredging has therefore hindered growth of commercial traffic on the Waterway, and deterred those who might consider it viable alternative to rail or trucks to bypass it altogether.
While the USACE is, in theory, responsible for maintaining the AIWW, it also receives its annual funding from the Energy and Water Development Appropriations subcommittee. That federal budget process gives priority is to inland waterways based on the amount of cargo carried annually on barges. The Corps maintains the annual Waterborne Commerce Statistics database that is the documentation the Office of Management and Budget (OMB) uses to develop the President’s budget. But, OMB does not take into consideration is the many other vessels that use and rely on the AIWW. Commercial fishing vessels, sport fishing vessels, recreational vessels, National Oceanic and Atmospheric Administration (NOAA) vessels, U.S. Department of Energy contracted vessels, research vessels and dredging vessels are not documented. The resultant budget is inadequate, causes major shoaling problems and exacerbates an already bad situation.
Commercial AIWW users pay a fuel tax to the Inland Waterway Trust Fund (IWTF). The trust fund is used to supplement federal funding for major lock rehabilitation and construction projects on inland waterways. Current legislation doesn’t allow any of the funds to be used for maintenance projects and since Corps projects on the AIWW require maintenance funds they are not eligible to receive funds from the IWTF. Funding for navigable waters is calculated by ton miles. And because at present, the AIWW is considered to be a low use waterway, it isn’t eligible for much in the way of help. To be fair, North Carolina has seen $1.89 million, but no other AIWW state.
Finally, the Intracoastal Waterway is also used extensively by recreational boaters. Studies have shown that recreational boaters bring millions, and in the case of Florida, billions of dollars to state budgets. The waterway is also a safe navigation channel used by vessels not equipped for ocean travel or for when weather conditions make the ocean too rough to travel.

The Environment
Even the most vociferous opponents of increased spending on the AIWW would have to concede that the most energy-efficient way to move commodities such as coal, grain, iron, steel, aggregates, petroleum and chemical products is to use the nation’s navigable rivers.  Barges can move one ton of cargo 576 miles per gallon of fuel. A rail car would move the same ton of cargo 413 miles, and a truck only 155 miles. The Table shown shown to the left amply demonstrates this fact.

Economics
Even at current depths, the value of the AIWW is easy to calculate. To get a perspective of what it could produce if properly dredged, consider that a 2006 North Carolina Report to the North Carolina Sea Grant Program, the North Carolina Department of Environment and Natural Resources (NCDENR) (among others) on the Economic Impacts and Economic Benefits of Recreational Boating Along the Atlantic Intracoastal Waterway (AIWW) in North Carolina showed that the AIWW produces $257 million in annual sales, over 4,000 jobs, $124 million in wages, $35.6 Million in federal taxes and fees and $21.4 million in state taxes and fees. A similar survey in Georgia claims $33 million is total revenue generated by the AIWW and the economic impact in Florida alone is a staggering $18 Billion in total economic output.
Lurking untapped just a few miles to the West are the untold hundreds of thousands of trucks and rail cars moving cargo north to south and back along clogged interstate highways and railways that crawl along at an average of nine miles per hour along congested intermodal hubs.

Growing Advocacy
The Atlantic Intracoastal Waterway Association (AIWA) represents the interests of commercial and recreational users of the waterway. The only organization dedicated to ensuring the future of the AIWW, its members hail from 39 states and Canada and include both commercial and recreational users. Over time, the association has accomplished much but still has a long way to go in order to ensure that the Waterway fulfills the original vision of its creators. Already, AIWA Leaders have successfully:

Today, the Association is working to:

The Ultimate Marine Highway - AIWW
Ideal for high value project cargoes, heavylift cargoes and other similar traffic that can’t easily go via rail or truck, the Waterway has its uses. This type of cargo also doesn’t lend itself to be easily counted when it comes to anteing up for dredging funds. In terms of funding, weight is the primary factor considered by federal authorities. Says Pickel, “Other metrics need to be considered.” Also according to Pickel, no complete AIW study has ever been performed. Section 218 of the WRRDA bill now in play in Congress – if it ever passes – dictates that a feasibility study be done of both GIW and AIW.
Paralleling the nation’s busiest and one of its longest Interstate Highways (I-95), the possibilities are endless. For a properly dredged AIWW, and with just one barge taking the place of as many as 100 semi-trucks, the savings in reduced wear and tear and abuse on the federal highway system is reason alone to begin the effort to rehabilitate the Waterway. And, if the EPA is serious about reducing emissions and improving the air that we breathe, then the AIWW is an easy place to start that journey. Nevertheless, at the recent National Waterways Conference, a U.S. Maritime Administration official spent his time at the dais crowing about the possibilities of the so-called U.S. marine highway system and then admitted that the AIWW was not eligible for even one dollar of the “Tiger Grant” money being passed out. In the end, Marad has little to offer beyond cheerleading.

The Future
Initially set up in part as a function of National Defense (predating WWII), the AIWW has for 70 years been up and running and completely connects Norfolk, VA to Miami, FL. Future use for the Waterway, beyond its current service, could also include service to offshore East coast wind farms or oil & gas exploration, should either ever come to fruition. For now, the USACE insists that it will, in the future, do less with less. That prospect does not bode well for the AIWW. Today’s federal transport policies leave the Waterway firmly aground as an afterthought in the nation’s intermodal equation. And, that’s just shallow.

(As published in the November 2013 edition of Marine News - www.marinelink.com) 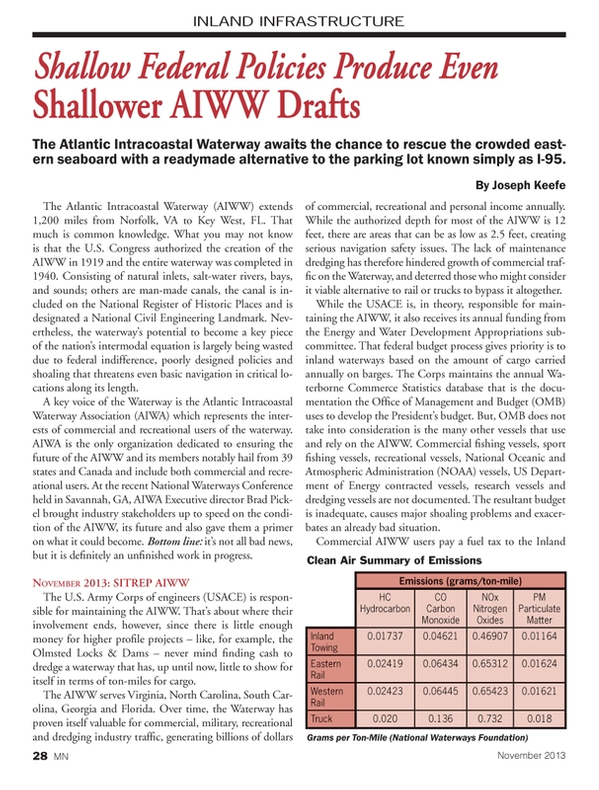