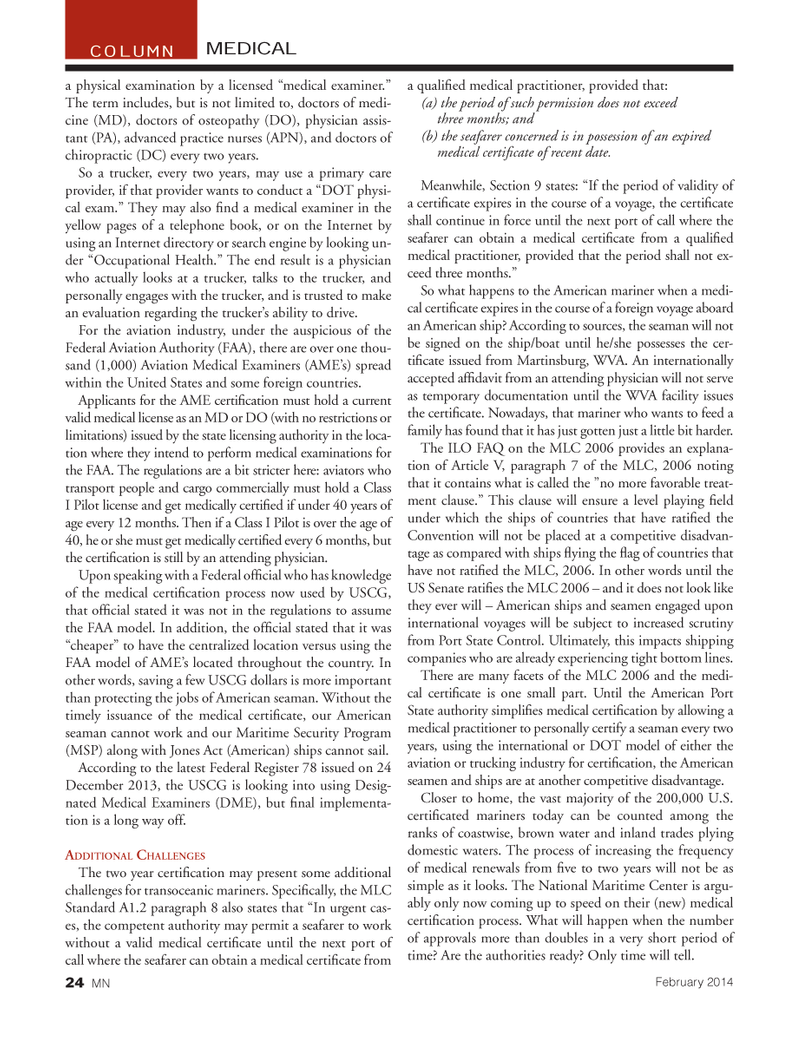 a physical examination by a licensed ?medical examiner.? The term includes, but is not limited to, doctors of medi-cine (MD), doctors of osteopathy (DO), physician assis-tant (PA), advanced practice nurses (APN), and doctors of chiropractic (DC) every two years. So a trucker, every two years, may use a primary care provider, if that provider wants to conduct a ?DOT physi- cal exam.? They may also  nd a medical examiner in the yellow pages of a telephone book, or on the Internet by using an Internet directory or search engine by looking un- der ?Occupational Health.? The end result is a physician who actually looks at a trucker, talks to the trucker, and personally engages with the trucker, and is trusted to make an evaluation regarding the trucker?s ability to drive. For the aviation industry, under the auspicious of the Federal Aviation Authority (FAA), there are over one thou- sand (1,000) Aviation Medical Examiners (AME?s) spread within the United States and some foreign countries. Applicants for the AME certi cation must hold a current valid medical license as an MD or DO (with no restrictions or limitations) issued by the state licensing authority in the loca- tion where they intend to perform medical examinations for the FAA. The regulations are a bit stricter here: aviators who transport people and cargo commercially must hold a Class I Pilot license and get medically certi ed if under 40 years of age every 12 months. Then if a Class I Pilot is over the age of 40, he or she must get medically certi ed every 6 months, but the certi cation is still by an attending physician. Upon speaking with a Federal of cial who has knowledge of the medical certi cation process now used by USCG, that of cial stated it was not in the regulations to assume the FAA model. In addition, the of cial stated that it was ?cheaper? to have the centralized location versus using the FAA model of AME?s located throughout the country. In other words, saving a few USCG dollars is more important than protecting the jobs of American seaman. Without the timely issuance of the medical certi cate, our American seaman cannot work and our Maritime Security Program (MSP) along with Jones Act (American) ships cannot sail. According to the latest Federal Register 78 issued on 24 December 2013, the USCG is looking into using Desig- nated Medical Examiners (DME), but  nal implementa- tion is a long way off. ADDITIONAL CHALLENGESThe two year certi cation may present some additional challenges for transoceanic mariners. Speci cally, the MLC Standard A1.2 paragraph 8 also states that ?In urgent cas- es, the competent authority may permit a seafarer to work without a valid medical certi cate until the next port of call where the seafarer can obtain a medical certi cate from a quali ed medical practitioner, provided that: (a) the period of such permission does not exceed three months; and (b) the seafarer concerned is in possession of an expired medical certiÞ cate of recent date. Meanwhile, Section 9 states: ?If the period of validity of a certi cate expires in the course of a voyage, the certi cate shall continue in force until the next port of call where the seafarer can obtain a medical certi cate from a quali ed medical practitioner, provided that the period shall not ex- ceed three months.? So what happens to the American mariner when a medi- cal certi cate expires in the course of a foreign voyage aboard an American ship? According to sources, the seaman will not be signed on the ship/boat until he/she possesses the cer-ti cate issued from Martinsburg, WVA. An internationally accepted af davit from an attending physician will not serve as temporary documentation until the WVA facility issues the certi cate. Nowadays, that mariner who wants to feed a family has found that it has just gotten just a little bit harder. The ILO FAQ on the MLC 2006 provides an explana- tion of Article V, paragraph 7 of the MLC, 2006 noting that it contains what is called the ?no more favorable treat- ment clause.? This clause will ensure a level playing  eld under which the ships of countries that have rati ed the Convention will not be placed at a competitive disadvan- tage as compared with ships  ying the  ag of countries that have not rati ed the MLC, 2006. In other words until the US Senate rati es the MLC 2006 ? and it does not look like they ever will ? American ships and seamen engaged upon international voyages will be subject to increased scrutiny from Port State Control. Ultimately, this impacts shipping companies who are already experiencing tight bottom lines. There are many facets of the MLC 2006 and the medi- cal certi cate is one small part. Until the American Port State authority simpli es medical certi cation by allowing a medical practitioner to personally certify a seaman every two years, using the international or DOT model of either the aviation or trucking industry for certi cation, the American seamen and ships are at another competitive disadvantage. Closer to home, the vast majority of the 200,000 U.S. certi cated mariners today can be counted among the ranks of coastwise, brown water and inland trades plying domestic waters. The process of increasing the frequency of medical renewals from  ve to two years will not be as simple as it looks. The National Maritime Center is argu- ably only now coming up to speed on their (new) medical certi cation process. What will happen when the number of approvals more than doubles in a very short period of time? Are the authorities ready? Only time will tell. MEDICALCOLUMNFebruary 2014 24 MNMN FEB14 Layout 18-31.indd 24MN FEB14 Layout 18-31.indd 241/20/2014 10:03:26 AM1/20/2014 10:03:26 AM