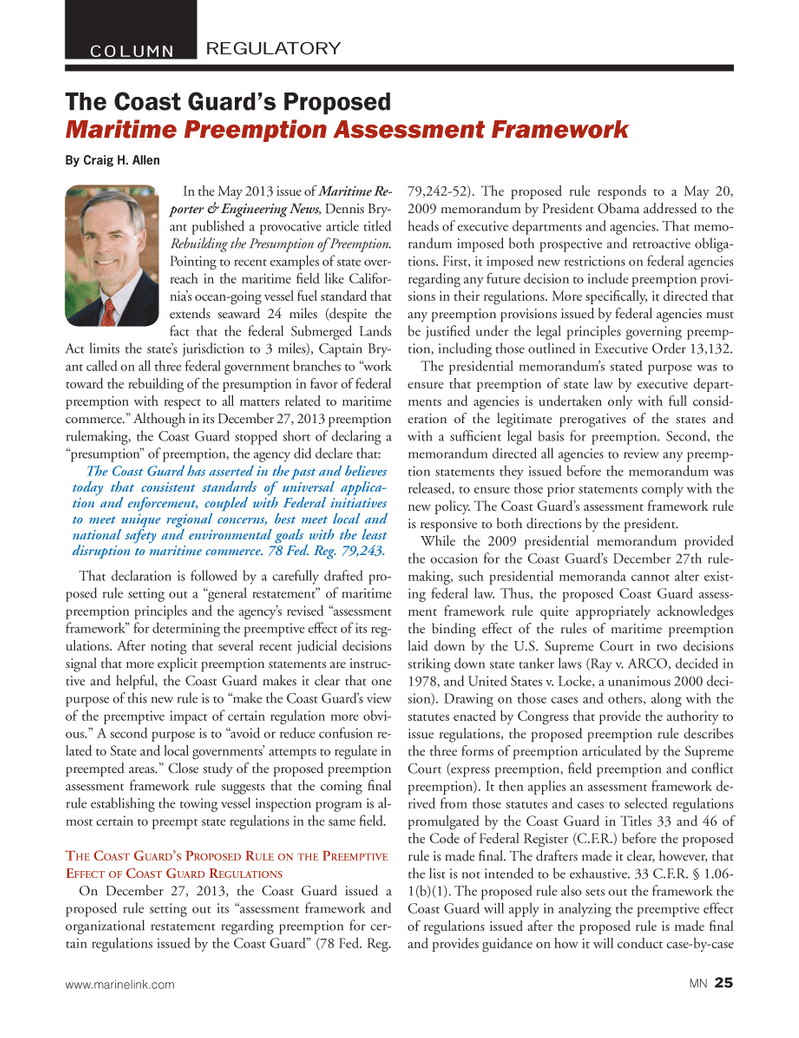 In the May 2013 issue of Maritime Re- porter & Engineering News , Dennis Bry- ant published a provocative article titled Rebuilding the Presumption of Preemption . Pointing to recent examples of state over- reach in the maritime Þ eld like Califor- niaÕs ocean-going vessel fuel standard that extends seaward 24 miles (despite the fact that the federal Submerged Lands Act limits the stateÕs jurisdiction to 3 miles), Captain Bry- ant called on all three federal government branches to Òwork toward the rebuilding of the presumption in favor of federal preemption with respect to all matters related to maritime commerce.Ó Although in its December 27, 2013 preemption rulemaking, the Coast Guard stopped short of declaring a ÒpresumptionÓ of preemption, the agency did declare that: The Coast Guard has asserted in the past and believes today that consistent standards of universal applica- tion and enforcement, coupled with Federal initiatives to meet unique regional concerns, best meet local and national safety and environmental goals with the least disruption to maritime commerce. 78 Fed. Reg. 79,243. That declaration is followed by a carefully drafted pro- posed rule setting out a Ògeneral restatementÓ of maritime preemption principles and the agencyÕs revised Òassessment frameworkÓ for determining the preemptive effect of its reg- ulations. After noting that several recent judicial decisions signal that more explicit preemption statements are instruc- tive and helpful, the Coast Guard makes it clear that one purpose of this new rule is to Òmake the Coast GuardÕs view of the preemptive impact of certain regulation more obvi- ous.Ó A second purpose is to Òavoid or reduce confusion re- lated to State and local governmentsÕ attempts to regulate in preempted areas.Ó Close study of the proposed preemption assessment framework rule suggests that the coming Þ nal rule establishing the towing vessel inspection program is al- most certain to preempt state regulations in the same Þ eld. THE COAST GUARD ?S PROPOSED RULE ON THE PREEMPTIVE EFFECT OF COAST GUARD REGULATIONS On December 27, 2013, the Coast Guard issued a proposed rule setting out its Òassessment framework and organizational restatement regarding preemption for cer- tain regulations issued by the Coast GuardÓ (78 Fed. Reg. 79,242-52). The proposed rule responds to a May 20, 2009 memorandum by President Obama addressed to the heads of executive departments and agencies. That memo- randum imposed both prospective and retroactive obliga- tions. First, it imposed new restrictions on federal agencies regarding any future decision to include preemption provi- sions in their regulations. More speciÞ cally, it directed that any preemption provisions issued by federal agencies must be justiÞ ed under the legal principles governing preemp- tion, including those outlined in Executive Order 13,132. The presidential memorandumÕs stated purpose was to ensure that preemption of state law by executive depart- ments and agencies is undertaken only with full consid- eration of the legitimate prerogatives of the states and with a sufÞ cient legal basis for preemption. Second, the memorandum directed all agencies to review any preemp- tion statements they issued before the memorandum was released, to ensure those prior statements comply with the new policy. The Coast GuardÕs assessment framework rule is responsive to both directions by the president. While the 2009 presidential memorandum provided the occasion for the Coast GuardÕs December 27th rule- making, such presidential memoranda cannot alter exist- ing federal law. Thus, the proposed Coast Guard assess- ment framework rule quite appropriately acknowledges the binding effect of the rules of maritime preemption laid down by the U.S. Supreme Court in two decisions striking down state tanker laws (Ray v. ARCO, decided in 1978, and United States v. Locke, a unanimous 2000 deci- sion). Drawing on those cases and others, along with the statutes enacted by Congress that provide the authority to issue regulations, the proposed preemption rule describes the three forms of preemption articulated by the Supreme Court (express preemption, Þ eld preemption and conß ict preemption). It then applies an assessment framework de- rived from those statutes and cases to selected regulations promulgated by the Coast Guard in Titles 33 and 46 of the Code of Federal Register (C.F.R.) before the proposed rule is made Þ nal. The drafters made it clear, however, that the list is not intended to be exhaustive. 33 C.F.R. ¤ 1.06- 1(b)(1). The proposed rule also sets out the framework the Coast Guard will apply in analyzing the preemptive effect of regulations issued after the proposed rule is made Þ nal and provides guidance on how it will conduct case-by-case REGULATORY COLUMNThe Coast Guard?s Proposed Maritime Preemption Assessment Framework By Craig H. Allenwww.marinelink.com MN 25MN FEB14 Layout 18-31.indd 25MN FEB14 Layout 18-31.indd 251/20/2014 10:03:33 AM1/20/2014 10:03:33 AM