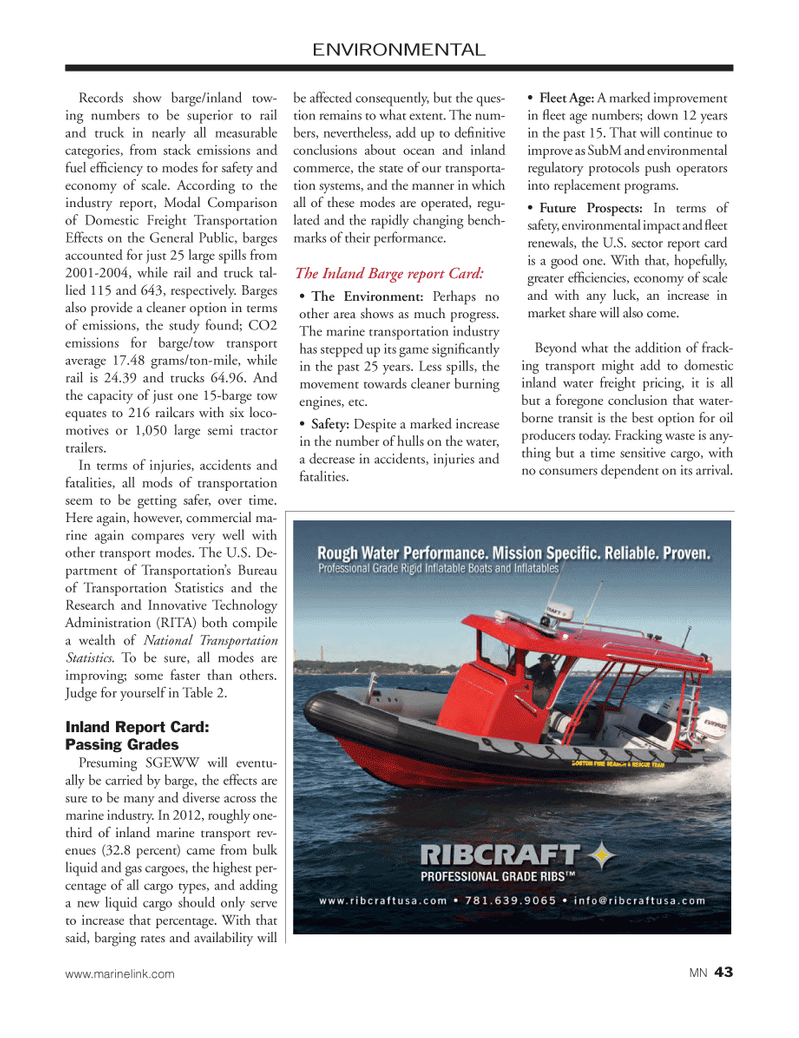 ENVIRONMENTAL Records show barge/inland tow- ing numbers to be superior to rail and truck in nearly all measurable categories, from stack emissions and fuel efÞ ciency to modes for safety and economy of scale. According to the industry report, Modal Comparison of Domestic Freight Transportation Effects on the General Public, barges accounted for just 25 large spills from 2001-2004, while rail and truck tal- lied 115 and 643, respectively. Barges also provide a cleaner option in terms of emissions, the study found; CO2 emissions for barge/tow transport average 17.48 grams/ton-mile, while rail is 24.39 and trucks 64.96. And the capacity of just one 15-barge tow equates to 216 railcars with six loco-motives or 1,050 large semi tractor trailers.In terms of injuries, accidents and fatalities, all mods of transportation seem to be getting safer, over time. Here again, however, commercial ma- rine again compares very well with other transport modes. The U.S. De- partment of TransportationÕs Bureau of Transportation Statistics and the Research and Innovative Technology Administration (RITA) both compile a wealth of National Transportation Statistics . To be sure, all modes are improving; some faster than others. Judge for yourself in Table 2. Inland Report Card: Passing GradesPresuming SGEWW will eventu- ally be carried by barge, the effects are sure to be many and diverse across the marine industry. In 2012, roughly one- third of inland marine transport rev- enues (32.8 percent) came from bulk liquid and gas cargoes, the highest per-centage of all cargo types, and adding a new liquid cargo should only serve to increase that percentage. With that said, barging rates and availability will be affected consequently, but the ques- tion remains to what extent. The num- bers, nevertheless, add up to deÞ nitive conclusions about ocean and inland commerce, the state of our transporta- tion systems, and the manner in which all of these modes are operated, regu- lated and the rapidly changing bench-marks of their performance. The Inland Barge report Card:  The Environment: Perhaps no other area shows as much progress. The marine transportation industry has stepped up its game signiÞ cantly in the past 25 years. Less spills, the movement towards cleaner burning engines, etc. Safety: Despite a marked increase in the number of hulls on the water, a decrease in accidents, injuries and fatalities. Fleet Age: A marked improvement in ß eet age numbers; down 12 years in the past 15. That will continue to improve as SubM and environmental regulatory protocols push operators into replacement programs.  Future Prospects: In terms of safety, environmental impact and ß eet renewals, the U.S. sector report card is a good one. With that, hopefully, greater efÞ ciencies, economy of scale and with any luck, an increase in market share will also come. Beyond what the addition of frack- ing transport might add to domestic inland water freight pricing, it is all but a foregone conclusion that water- borne transit is the best option for oil producers today. Fracking waste is any- thing but a time sensitive cargo, with no consumers dependent on its arrival. www.marinelink.com MN 43MN FEB14 Layout 32-49.indd 43MN FEB14 Layout 32-49.indd 431/20/2014 10:24:45 AM1/20/2014 10:24:45 AM