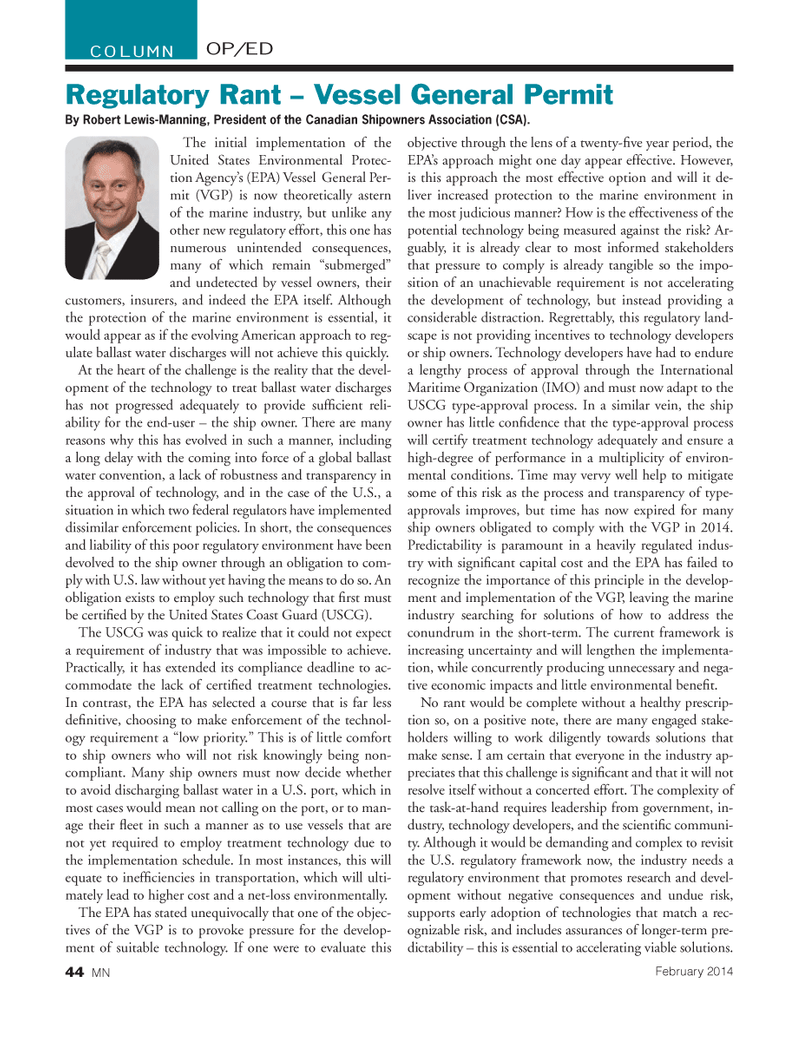 The initial implementation of the United States Environmental Protec- tion Agency?s (EPA) Vessel General Per- mit (VGP) is now theoretically astern of the marine industry, but unlike any other new regulatory effort, this one has numerous unintended consequences, many of which remain ?submerged? and undetected by vessel owners, their customers, insurers, and indeed the EPA itself. Although the protection of the marine environment is essential, it would appear as if the evolving American approach to reg- ulate ballast water discharges will not achieve this quickly. At the heart of the challenge is the reality that the devel- opment of the technology to treat ballast water discharges has not progressed adequately to provide suf cient reli- ability for the end-user ? the ship owner. There are many reasons why this has evolved in such a manner, including a long delay with the coming into force of a global ballast water convention, a lack of robustness and transparency in the approval of technology, and in the case of the U.S., a situation in which two federal regulators have implemented dissimilar enforcement policies. In short, the consequences and liability of this poor regulatory environment have been devolved to the ship owner through an obligation to com- ply with U.S. law without yet having the means to do so. An obligation exists to employ such technology that  rst must be certi ed by the United States Coast Guard (USCG). The USCG was quick to realize that it could not expect a requirement of industry that was impossible to achieve. Practically, it has extended its compliance deadline to ac- commodate the lack of certi ed treatment technologies. In contrast, the EPA has selected a course that is far less de nitive, choosing to make enforcement of the technol- ogy requirement a ?low priority.? This is of little comfort to ship owners who will not risk knowingly being non- compliant. Many ship owners must now decide whether to avoid discharging ballast water in a U.S. port, which in most cases would mean not calling on the port, or to man- age their  eet in such a manner as to use vessels that are not yet required to employ treatment technology due to the implementation schedule. In most instances, this will equate to inef ciencies in transportation, which will ulti- mately lead to higher cost and a net-loss environmentally. The EPA has stated unequivocally that one of the objec- tives of the VGP is to provoke pressure for the develop- ment of suitable technology. If one were to evaluate this objective through the lens of a twenty- ve year period, the EPA?s approach might one day appear effective. However, is this approach the most effective option and will it de- liver increased protection to the marine environment in the most judicious manner? How is the effectiveness of the potential technology being measured against the risk? Ar- guably, it is already clear to most informed stakeholders that pressure to comply is already tangible so the impo- sition of an unachievable requirement is not accelerating the development of technology, but instead providing a considerable distraction. Regrettably, this regulatory land- scape is not providing incentives to technology developers or ship owners. Technology developers have had to endure a lengthy process of approval through the International Maritime Organization (IMO) and must now adapt to the USCG type-approval process. In a similar vein, the ship owner has little con dence that the type-approval process will certify treatment technology adequately and ensure a high-degree of performance in a multiplicity of environ- mental conditions. Time may vervy well help to mitigate some of this risk as the process and transparency of type- approvals improves, but time has now expired for many ship owners obligated to comply with the VGP in 2014. Predictability is paramount in a heavily regulated indus- try with signi cant capital cost and the EPA has failed to recognize the importance of this principle in the develop- ment and implementation of the VGP, leaving the marine industry searching for solutions of how to address the conundrum in the short-term. The current framework is increasing uncertainty and will lengthen the implementa- tion, while concurrently producing unnecessary and nega- tive economic impacts and little environmental bene t.No rant would be complete without a healthy prescrip- tion so, on a positive note, there are many engaged stake- holders willing to work diligently towards solutions that make sense. I am certain that everyone in the industry ap- preciates that this challenge is signi cant and that it will not resolve itself without a concerted effort. The complexity of the task-at-hand requires leadership from government, in- dustry, technology developers, and the scienti c communi- ty. Although it would be demanding and complex to revisit the U.S. regulatory framework now, the industry needs a regulatory environment that promotes research and devel- opment without negative consequences and undue risk, supports early adoption of technologies that match a rec- ognizable risk, and includes assurances of longer-term pre- dictability ? this is essential to accelerating viable solutions. Regulatory Rant ? Vessel General Permit By Robert Lewis-Manning, President of the Canadian Shipowners Association (CSA). OP/EDCOLUMNFebruary 2014 44 MNMN FEB14 Layout 32-49.indd 44MN FEB14 Layout 32-49.indd 441/20/2014 10:20:51 AM1/20/2014 10:20:51 AM