Maritime Challenges in the 116th Congress.

The 116th Congress, with its now Democrat-controlled House and 110 newly-elected members, faces a choice. On one hand, Congress can continue to pursue the status quo, supporting U.S.-flag vessel operators and domestic port infrastructure development through existing programs, with suboptimal results. On the other, the 116th Congress can choose to be bold. It can recognize that the U.S.-flag fleet, with only 83 vessels operating in international trade, clearly requires new mechanisms of support.  Congress can also recognize that our domestic port infrastructure is a strategic national asset, critical to the health of our economy, requiring additional direct federal funding.

U.S.-Flag Challenges
If the 116th Congress chooses the status quo, the U.S.-flag industry will continue to face significant problems in the coming years. Take, for example, the Maritime Security Program (MSP), which on its face would appear to be in a relatively stable position during the forthcoming Congressional session.  The program’s funding is currently authorized at $5 million per vessel through Fiscal Year (FY) 2020, increasing to $5.2 million per vessel in FY 2021. However, notwithstanding these authorizations, funding for the program is not guaranteed.

With funding caps under the Budget Control Act of 2011 set to be reinstated in FY 2020, the Maritime Administration (MARAD) may once again find itself scrambling to seek budget anomalies to evade sequestration cuts, or face losing additional vessels from the U.S.-flag fleet. In addition, the MSP stipend payment is set to drop by nearly a third after FY 2021, which the 116th Congress will need to address to ensure that U.S.-flag operators remain economically viable while providing critical sealift capabilities to the Department of Defense.

Additionally, dwindling government-impelled cargo opportunities and ever-increasing operational costs further undermine the economics of operating U.S.-flag vessels in international trade. Traditional sources of preference cargoes will once again face significant pressure during the upcoming Congressional session. For example, the Export-Import Bank’s reauthorization is set to expire on September 30, 2019. Beyond this, the President’s budget requests continue to zero out established humanitarian aid programs such as P.L. 480 Title II and McGovern-Dole Food for Education. These actions create significant uncertainty about the future availability of preference cargoes.

Again, the 116th Congress must act boldly to reverse the downward trend of preference cargoes.  In addition to reauthorizing and funding these established programs, Congress must seek to create increased U.S.-flag cargo opportunities wherever possible and give MARAD additional statutory enforcement tools.  Quite simply, without these additional levers of support in times of peace, it is questionable whether there will be a sufficient U.S.-flag fleet when called upon in times of war.

Port Infrastructure Opportunities
On the port infrastructure side, the 116th Congress holds both a great deal of promise and uncertainty. On December 11th, Transportation Secretary Elaine Chao announced the recipients of the 2018 Better Utilizing Investments to Leverage Development (BUILD) Transportation Discretionary Grants. Ninety-one transportation projects were awarded $1.5 billion in grant funding. Included in the awards were ten port projects, totaling $148 million in funding. Various other surface transportation projects will occur outside of port property, but will have positive direct impacts on port development. While the total amount of port funding is encouraging, the percentage of available funding that was allocated to port projects remained relatively low – approximately 10% of the available funding. This percentage is generally consistent with prior transportation infrastructure grant awards since 2009.

The primary challenge with the BUIILD Transportation program is that it is funded with a lump sum to the Department of Transportation. Therefore, port projects must compete for grant funding against road, rail, and transit projects, which are generally more publicly and politically visible. Moreover, the BUILD Transportation program lacks a permanent authorization, and is instead authorized on a single year basis through appropriations acts, making funding less predictable.

However, a clear opportunity exists during the 116th Congress, where transportation infrastructure funding will likely receive bipartisan support. A permanent authorization for the BUILD Transportation program – or preferably a new standalone port grant program – could finally deliver on long-promised increases in infrastructure funding, while recognizing the irrefutable strategic value of our nation’s ports.

Signs of Bold Intentions in Shipbuilding
The good news is that Congress has signaled some willingness to take bold actions to support the U.S. maritime industry, as evidenced by both enacted and proposed shipbuilding legislation during the prior Congressional session. For example, the Consolidated Appropriations Act, 2018, included $300 million to kick-off the novel National Security Multi-Mission Vessel (NSMV) program. Additionally, the February 12, 2018, addendum to the President’s FY 2019 budget proposal included an additional $300 million in funding to procure and convert vessels in U.S. shipyards to replace two more state maritime academy training vessels. The 116th Congress now must follow through with additional funding for these critical shipyard projects and training platforms.

Additional positive indicators of bold action came in the form of Rep. John Garamendi’s (D-CA) proposed Energizing American Shipbuilding Act, which sought to mandate the use of U.S.-built, U.S.-flag vessels to carry a portion of exported liquefied natural gas and crude oil.  In championing the bill, Mr. Garamendi was unequivocal in stating that the “U.S. Merchant Marine and shipbuilding industries are strategic national assets critical to national security” and “critical to the growth and flow of our economy.” Rep. Garamendi, who served as the Ranking Member of the House Subcommittee on Coast Guard and Maritime Transportation in the 115th Congress, will have ample opportunity to pursue similar novel forms of support in a new leadership position.

These bold shipbuilding initiatives now must be replicated by the 116th Congress in support of both U.S.-flag vessel operations and port infrastructure development. The status quo is not sufficient, and Congress’ failure to act strategically – and develop new means of support for the U.S.-flag fleet and port infrastructure development – will have a lasting impact on our nation’s security and economy.

Jeff Vogel is a member in Cozen O’Connor’s Transportation & Trade Group.  He can be reached at jvogel@cozen.com.

This OP/ED first appeared in the February 2019 print edition of MarineNews magazine. 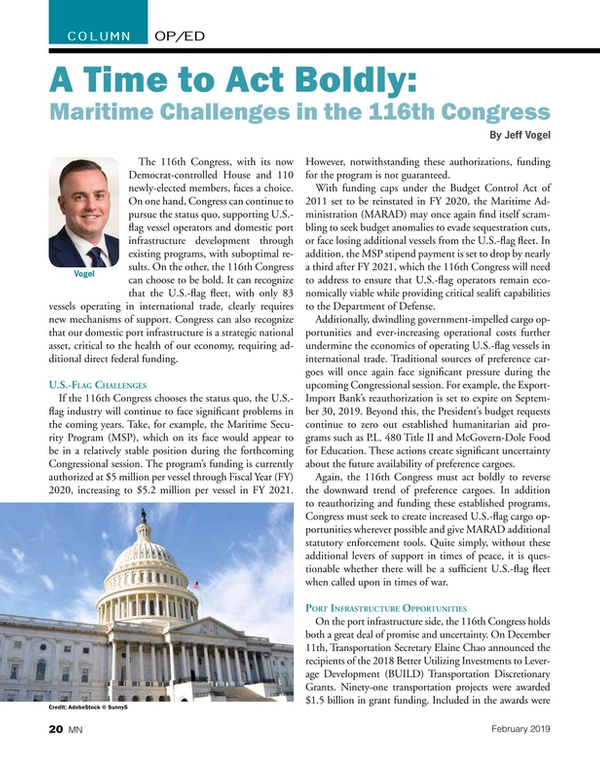