Sub M is here, now what?

Captain Pat Folan outlines the way forward, especially for the smaller towboat firms. It’s not rocket science, but it does involve common sense.

July 20, 2018 came and went, and we are all still here – mostly. The reality of Sub M has begun to sink in and for some it signals the end of a business and career. The AWO RCP members, oil movers and early adopters are going to make it. But for some of the ‘Mom & Pops,’ this is looking like a bridge too far.

And some of this group are the ones that needed to be weeded out. It’s tough for the companies that are doing their best to comply to compete with the guys that don’t run with licensed mariners and won’t spend a dime on lifesaving or firefighting equipment or even steel and glass. Sub M will level the playing field.

It is also true that there are operators that don’t have deep pockets, are trying to make it and may not get there. The Coast Guard itself recently stated that they are far behind where they thought they would be in issuing COIs. The TPOs are looking for the work and we meet many owners who either have no desire to comply, think it doesn’t apply to them or plan on running until the blue suits say they can’t run anymore. One single boat owner told me he was selling the boat as soon as he could. He said if he had known it would be this bad, he never would have gotten in to the industry. He had a few words for me: “Mini-storage.” They can’t destroy your life when you store things for a living. And, his boat is in good shape with a current Loadline.

So, what if they passed a law and no one complied?
I’ve spoken with the U.S. Coast Guard in multiple districts and they are wondering what the owners are going to do. I have spoken with owners and they are wondering what they are going to do. The Coast Guard doesn’t have the manpower to shut down a big piece of an industry (although it could order them to moor the vessels and stop trading)nor do I believe that it wants to. But what happens if 1,000 boats just don’t comply? The Coast Guard at the District level is looking at the same thing. Probably more problematic for them is what would happen if all those boats waited until the last minute and then applied for a COI? This is also a TPO worry. And, it’s ours at Tug & Barge Solutions. We were pushing companies to get their TSMS audits done before Christmas, but that also makes June a tough month.  And all the while the clock is ticking.

If you are the owner on the fence, what do you do?
Some say that they will probably just go the Coast Guard Option because that is the cheapest path of least resistance. After all, they have had a good relationship with the Coast Guard, so far. But what they fail to realize is that the Coast Guard is not your friend; not your sworn enemy either, but an enforcement agency with a job to do. And that nice inspector in Florida is going to be in Dutch Harbor next summer and who will his replacement be? Another nice guy? Every mariner with a few issues under his belt will tell you the same thing: At all costs, keep the Coast Guard off my boat. So why invite them on?

A company recently asked the Coast Guard to attend a drydocking. Nine weeks later and with more than $100,000 in changes they are no longer advocates for the Coast Guard on their vessels. Separately, another company bought a boat on the Gulf and was bringing her home to the Mid-Atlantic region when the Coast Guard tied them to the dock about week away from home. Had they understood that Sub M was in effect when they left and what that entailed, they might have had the boat audited, deficiencies corrected and the crew properly trained, but they were just delivering the boat. What could go wrong? Three weeks later with a $30,000 tab and a new crew, the vessel headed north again. She will be sold upon arrival because the owner has lost his taste for the towing industry.

We didn’t become involved with this vessel until after the COTP Order was issued. The Coast Guard did their job and was great to deal with. But this all was avoidable. How many more times will this happen before the industry awakens to a new day?

The TSMS Option is by far the better one for any company and certainly for the mariners. We have worked with four of the TPOs and have watched our customers learn. We have seen the auditors teach the mariners and reinforce our message. We have seen companies improve. The TSMS is there for the safety of the crew and company. The Coast Guard option enforces safety through a checklist but never truly measures the safety climate in a company. That’s unfortunate because the point of SubM is the safety of the mariner.

If you are one of those companies who has yet to decide on a path to compliance, choose the TSMS option. Look at your company as a whole, the vessel(s), their operations, the crew and the risks that are taken and work to minimize them. If you embrace the law, it will provide you with an opportunity to make your company better and your crew members safer. It goes beyond that.

As each company works within their TSMS and starts to truly understand it and make it theirs, they are then contributing to an overall safer work environment for industry. Don’t be afraid to be selfish: that original outlay of money is an investment in your company. Safer vessels, better trained and educated crews will translate into better insurance rates. It might be that they just don’t rise or as we have seen more than once, it might be a premium reduction with auditable proof of a working TSMS.

As a former tug owner, a safety management system helped me grow as a business (more opportunities with a good system and a good track record) and it forced me to look at risks and make some hard decisions. If you have a system, then you must live by it. And that may be the toughest thing that most of the small tug company owners are facing.

Sea Change
Sub M is a sea change for the industry. You can’t continue to operate in the manner that you have always done it. This is one case where curiosity will not kill the cat. Look around, ask questions, wonder why things are as they are. Most things on an older boat are there because someone else thought it was a good idea. Take the liferaft stored just above the engine room, for example. If your engine room is on fire, that raft is now a blob of melted plastic and it was your only way to escape safely. Look for a better spot to have it ready for emergency deployment.

We all keep the life jackets and immersion suits in the bunkrooms. It’s almost like Moses had the locations on one of the tablets and since then we have kept them there. If you can, talk to someone that was on a boat that sank. They’ll tell you that there was no time or desire to go back to the bunkroom to get the PFD or immersion suit. This happened to a friend of mine in New England waters in winter. The crew ended up in the water without their immersion suits because it was impossible to get to them before the boat rolled over. Hence, you MUST rethink safety.

Create a place at your Muster Station where your flares, PFDs, immersion suits and anything else you would need to abandon ship can be safely kept. A weather tight box in holder that will allow it to float free might mean the difference between life and death. Look under your wheelhouse dash. Many of those old wires can go. They are only there because someone else was lazy and could hide them behind the door.

Those are three relatively easy things to think about, but that’s Sub M with a TSMS. Look at your risks and minimize them. You do it everyday in the office, in the wheelhouse or on deck. Now do it with the bigger picture in mind. Then, document what is required (maintenance, training, tests and inspections, etc) and begin documenting risk assessments (Voyage Plans, JSAs, Near Misses) and soon it will all fit together. It’s not the way that you always did it, but maybe the old way wasn’t all that good. Embrace this change.

Our customers are the small towing companies across America. If you are in New York, look to Thomas J Brown and Sons for an example. Jim Brown owns and operates the company and vessels in the harbor. This law is a nuisance for Jim because his boats are yacht quality. They are impeccably maintained and excellently crewed. We installed HelmCONNECT for the recordkeeping with his TSMS and now a great company is getting even better. Or if you are on the Gulf Coast then Gulf Coast Tugs is the company to emulate.  Another great company using HelmCONNECT with our system to continuously improve. Ken Hebert is living proof that not only can the small company comply with Sub M but that the three-boat company can be better than the big guys. Not only has Gulf Coast Tugs become better but they have pushed us and HelmCONNECT to be better.

Sub M is not insurmountable (yet). But the clock is ticking. It is the law. And that means that your vessels must be in compliance with the law now. If you have more than one towing vessel, 25% of that fleet must have a COI before July 22, 2019. That does not mean that the other 75% can be kept the way you always kept a boat until it is their turn for a COI. July 20, 2018 meant that all towing vessels subject to Sub M were required to be in compliance.

Pat Folan is a partner in Tug & Barge Solutions and has operated towing vessels from Maine to Corpus Christi, TX, including the Alabama Rivers, Lower Mississippi, Great Lakes and Erie Canal. Tug & Barge Solutions exists to help companies and mariners adapt and then grow with Sub M. Reach him at pat@tugandbargesolutions.com

This article first appeared in the March 2019 print edition of MarineNews magazine. All images cortesy: T&BS 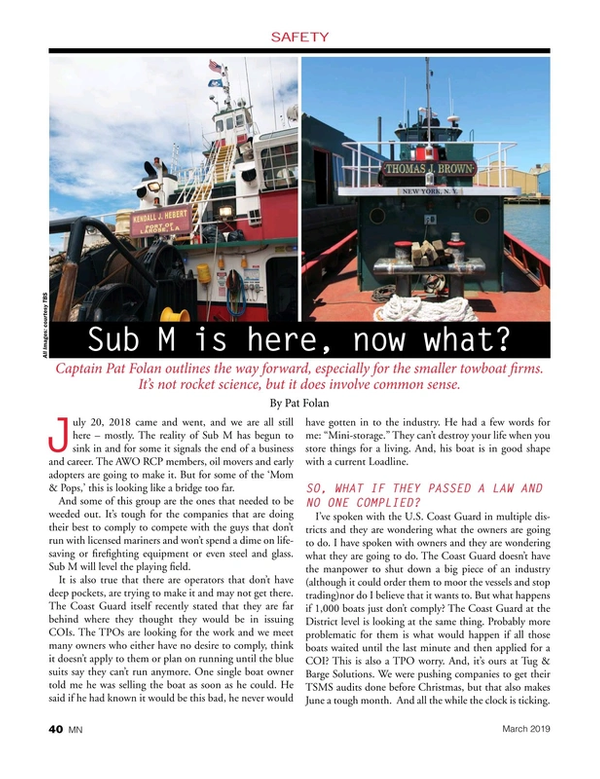 Other stories from March 2019 issue