Miss Vivian has a commanding presence while plying the waters off the Texas Gulf Coast.

There’s a rather heroic side to Miss Vivian, too. Fitted with two life rafts and 50 life preservers, the crew boat responds to calls of distress. Miss Vivian was used to retrieve personnel from an offshore oil platform during an approaching hurricane. It rescued a shrimp boat that lost engine power. Equipped with fire pumps, the vessel was also used to help extinguish a shoreline fire in Aransas Pass, Texas.

However, after years of dutiful service, the 1979 vessel needed a new lease on life, according to Richard Palmietto, owner of Sea Level Marine. Miss Vivian underwent a refurbishing that included interior updates and new exterior paint.

Deep in the hull was a more serious problem. In an effort to minimize exhaust emissions and stay well within air quality attainment levels, some harbors no longer welcome boats with aging two-cycle diesel engines. “With the old engines, we would get a thrust of black exhaust on startup or throttle-up operations,” recalls Palmietto. “Even on a calm day, we could see a slight bit of exhaust ash.”

Getting the grant
Knowing a repower was a smart decision for Miss Vivian and the future of the business, Sea Level Marine applied for a grant through the Texas Emissions Reduction Plan (TERP), a program administered by the Texas Commission on Environmental Quality. Once approved, Palmietto turned to Land & Sea Services, a certified John Deere marine dealer in La Marque, Texas, which recommended three John Deere PowerTech 6135SFM marine engines.

Palmietto and the vessel’s captain, Rueben Molina, were sold on the idea of repowering with John Deere engines. “We know of other boat owners who were getting rid of their two-cycle diesel engines and going to John Deere,” says Palmietto. “We also liked having the support of two John Deere marine dealers for warranty work and parts with Land & Sea in La Marque and Mid Coast Engine & Transmission, Inc., in Aransas Pass.”

Sea Level Marine worked closely with Land & Sea Services to repower the vessel in early 2019, mounting all three John Deere engines onto the original engine beds. Making some modifications to the motor mounts, the John Deere dealer paired the 429-kW (575-hp) engines with new ZF transmissions, along with the original shafts and 84x76-centimeter (33x30-inch) props. “We were fortunate our shafts and propellers paired well with the new engines and transmissions,” says Pamietto.

The repower took place Sea Level Marine’s dock in Aransas Pass, Texas, without having to take the vessel out of the water. 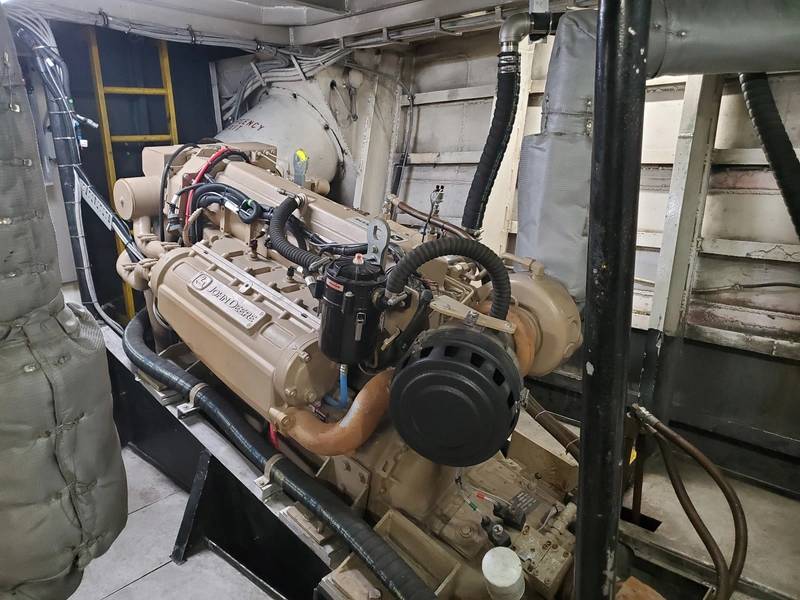 A trio with torque
After the repower, the gear ratio increased from 2:1 to 2.3:1, and the overall weight of the engines decreased by 1,860 kilograms (4,100 pounds). “To prevent a change in stability of our deck carrying capacity, we bolted lead plates below the engines in the bilge,” explains Palmietto.

An increase in horsepower and torque improved Miss Vivian’s speed and performance. “I’m running about 21 knots, which is pretty fast for a boat this size,” says Captain Molina. “The additional torque helps me maneuver the boat in tight spaces in the wind and waves.”

The increase in speed is also attracting more business from offshore clients needing equipment and supplies as soon as possible. Molina says Miss Vivian is reaching platform destinations in half the time as other crew boats that are only running top speeds of only 8 to 10 knots.

The engines are proving to be financially rewarding in other ways, too. “They are extremely economical compared to the previous engines,” adds Molina. “Before, I would run hard six hours and burn 500 to 600 gallons (1,893 to 2,271 liters) of diesel fuel under heavy load. Now, I run the same amount of time — with a comparable load — and the John Deere engines only consume 375 gallons (1,420 liters).”

Faster, more powerful, and fuel-efficient, Miss Vivian is better than ever, according to Molina and Palmietto. Plus, Miss Vivian is emissions-compliant now and is able to cruise into inner harbors without the disgrace of diesel smoke.

“We took a 1979 boat and made it like brand-new,” says Palmietto. “We gave Miss Vivian another life, and hopefully she’ll run another 20 years.” 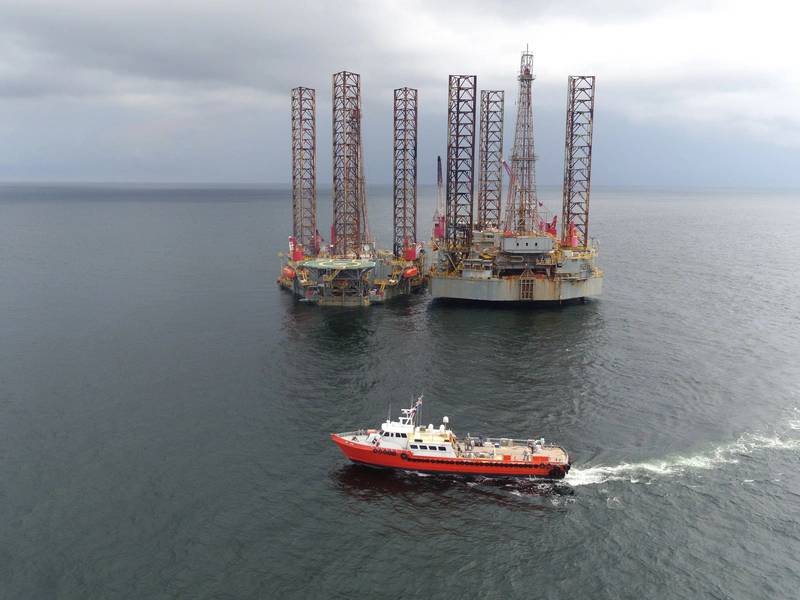 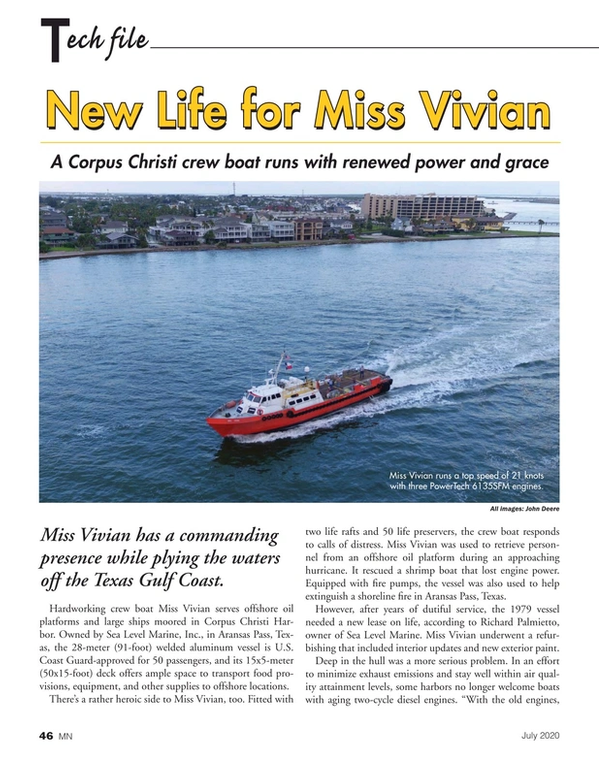