Marine Autonomy: The Future is Being Revealed

Automation, where routine tasks are handled by machines, has been talked about throughout maritime sectors for much of the 21st Century. Initially touted by suppliers of engine room and bridge management systems for its cost savings (with reduced manning levels), its value proposition was then infused with risk management (reduced human error) and remote operations, where vessels could be managed from a shoreside control room. In early 2017, Rolls Royce —an early proponent of unmanned operations—teamed with tug operator Svitzer on a remotely operated vessel, Svitzer Hermod in a well-publicized demonstration project in Copenhagen. This, and other earlier “proof of concept” exercises are now moving into true implementation phases.

Increasingly, automation of vessels is also tied into reduction of emissions (with sustainability a goal that is now top of mind across the entire business), where optimization—a machine and data based concept—is used to manage, and reduce, fuel consumption. Kevin Humphreys, Americas president for marine and offshore at Lloyds Register’s Houston office, told Marine News, “Autonomy will make a contribution to reduced emissions by identifying what may appear to small gains across multiple vessel systems and operating conditions. But when they are ‘stacked together’ they become a factor on each other; the value becomes increasingly noticeable and worthwhile.”

This trend is evidenced by traditional equipment companies teaming up with data scientists and information providers. In mid-May 2021, Alfa Laval (which joined the highly influential Mærsk Mc-Kinney Møller Center for Zero Carbon Shipping in January, 2021), described StormGeo, which it newly acquired, as “…a global leader in weather intelligence and advanced data science solutions.” The Swedish technology purveyor added that, “The acquisition is part of Alfa Laval's strategy to support the marine industry's efforts to make operations more efficient.” Swirling around in the background here is 2020’s COVID-19 pandemic, with its issues of seafarer repatriations and then, as 2021 unfolded, vaccinations. Labor-saving technologies likely moved farther up on shipping company wish lists. 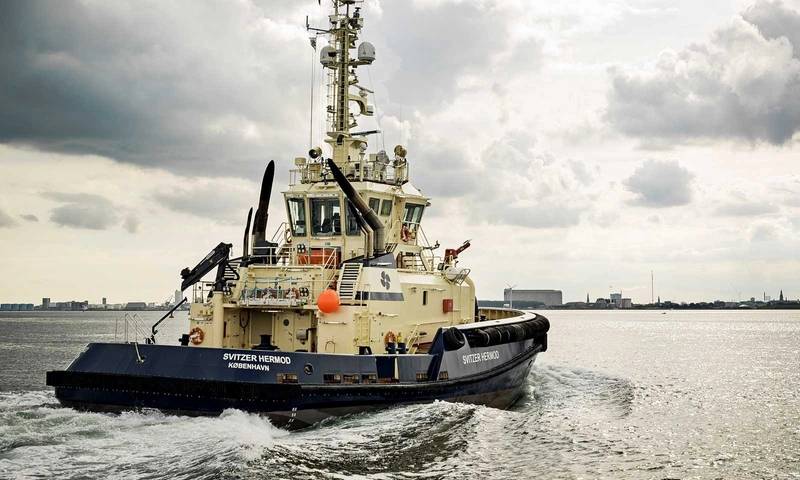 In early 2021, Svitzer announced a partnership with Kongsberg Marine (which had absorbed Rolls Royce’s maritime business) on RECOTUG, a remote-controlled tug business that would build on its earlier efforts. In a prepared release, Kongsberg’s manager for control applications, Carl Johansson, explained, “While the 2017 demonstrator project proved the concept, the technology we have at our disposal today means that RECOTUG is no longer a simple demonstrator project. Its aim is to provide Svitzer with a commercially viable product that the company will be able to use in its operations worldwide.”

From the Svitzer side, Thomas Bangslund, group head of innovation at Svitzer, added, “The original scope of the pilot was to assess if the remote control technology would allow us export situational awareness to an off-vessel location, and in a way that the captain was comfortable operating the vessel. This proved the case and now we are challenging ourselves to develop a tug that we can operate safely and efficiently from shore, down the line, potentially without a crew on board, so it’s a completely different ballgame.”

In the States, Foss Maritime will be installing an autonomous-command and -control system from Sea Machines Robotics, for use aboard its tugboat Rachael Allen, soon to be completed at the Nichols Brothers yard. The Z-Drive tug- with 90-ton bollard pull, will be used for tanker escorts and towing in California ports. According to Boston-based Sea Machines, its SM300 system includes “… transit autonomy, as well as remote access of the tugboat’s onboard machinery, a feature that allows personnel to manage and support operations from anywhere on board the vessel or from shore,” adding that, “Navigation obstacle detection and avoidance capabilities come standard…” The tug, the last of four to be delivered from Nichols Brothers, is powered by two MTU series 4000 main engines, meeting Tier 4 emission standards, coupled to US255 azimuth thrusters from Kongsberg.

Sea Machines is also making strides on the East Coast; it has demonstrated an autonomous delivery of cargo from Boston, where it is based, to Gloucester- farther up the Massachusetts coast, and operated autonomous workboat prototype in Boston harbor. Another deployment in the works will see its SM300 on a hybrid-powered vessel handling palletized produce and food between Connecticut and the north shore of Long Island, N.Y.

As the pace of technological advancement quickens, a certain tension exists between technology and regulation. Shipping’s regulator, the International Maritime Organization (IMO), in 2017 began a “scoping study” on how vessel automation might be regulated. Described the by IMO as a “first step” toward enabling regulation under a host of existing international treaties, the study, under the auspices of the IMO’s Maritime Safety Committee (MSC) was completed in May, 2021 at its MSC 103 meeting.

The IMO, in its scoping study, looked at multiple layers of autonomy. In announcing the study’s completion, it said, “Varying degrees of autonomy were considered: crewed ship with automated processes and decision support (Degree One); remotely controlled ship with seafarers on board (Degree Two); remotely controlled ship without seafarers on board (Degree Three); and fully autonomous ship (Degree Four).” An example of Degree One, well known in the offshore workboat realm, is dynamic positioning (DP), where seafarers can take control as needed. As IMO rules are developed, the Class Societies will play a vital role; in a submission to the just completed MSC 103, the International Association of Class Societies recommended that a new chapter of the Safety of Life at Sea convention (SOLAS) be devoted to autonomous vessels. Such a step—an alternative to the painstaking process of amending numerous international treaties—would provide a fast track for the regulators to keep up with the technologies.

The importance of the human element has not been lost in the journey to autonomy. Sea Machines asserted that, “Across all industries, autonomous technologies streamline manual, repetitive and tedious tasks, allowing personnel to focus on higher-level operations with reduced risk…” and stress that its SM300 “… allows personnel to manage and support operations from anywhere on board the vessel or from shore.” Kongsberg Marine, in describing the RECOTUG, said, “While the new tug has been designed to include the customary facilities to accommodate a crew, once the Kongsberg systems have been fully tested, the tug has the operational potential to be deployed as a remotely controlled unmanned vessel.” 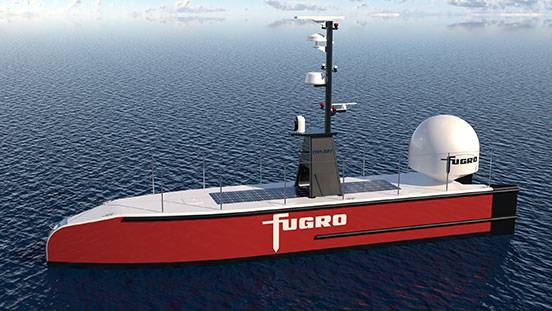 The underwater sector has, by necessity, embraced autonomy, and technologies developed for underwater inspection and survey vessels are now being made available to the workboat and other surface vessels. Fugro, a leader in deepwater surveys, offers a suite of unmanned vehicles, including its unmanned Blue Essence 12-meter surface vessel which is suitable for “inspection, construction support, hydrographic and geophysical surveys.” Fugro noted, “Blue Essence’s modular design means that it can be used for a wide range of industry tasks within the energy sector and others”. Ocean Infinity, a Texas-based marine robotics provider (known for its searches for the doomed MH370 airliner), which has been deploying Kongsberg Hugin autonomous underwater vehicles (AUV) in its unmanned deepsea survey and data collection work, is now developing a fleet of 15 hybrid (battery/ Volvo Penta diesel) powered unmanned surface vessels- dubbed Armada. The vessels, being built at Grovfjord Mek. Verksted (GMV) shipyard on Norway’s west coast, will also be able to launch AUVs. Closer to home, offshore stalwart Edison Chouest, with its eye on the offshore wind sector (where sustainability is crucial in vessel choice), has extensive experience in AUV’s and ROVs, with its C-Innovation subsidiary, based in the New Orleans area.

The classification societies’ successes in developing systems for manned ships can be adapted for the unmanned surface segment. In early June DNV announced that Ocean Infinity would be deploying its ShipManager platform. DNV said, “The robotic ships in Ocean Infinity’s Armada fleet use low-emission fleet technology and are equipped with state-of-the-art sensors and pioneering navigational solutions that allow information to be gathered from the shallowest and deepest waters, whether for exploration, mapping or searching for wreckage. The marine robots use hybrid technology, cutting CO2 emissions. An Armada robotic vessel emits up to 90% less CO2 than a conventional survey vessel.” Ocean Infinity stresses its green bona fides, saying that “Armada will be the first ever carbon neutral ocean tech and data company.” But Ocean Infinity also has its sights set on logistics and cargo delivery. At Armada’s 2020 launching, Dan Hook, the firm’s managing director, said, “We will be working with several partners as we introduce on-demand low emissions logistics services.

Also in Norway, Yara International (active across agriculture and more recently, in developing ammonia fuels for shipping ) took delivery in late 2020 of the battery powered Yara Birkeland from the Vard Brattvåg yard. The 3,200 dwt 120 TEU vessel has been tested for stability and is now docked at Horten (down the Fjord from Oslo) being further prepared for autonomous operation. 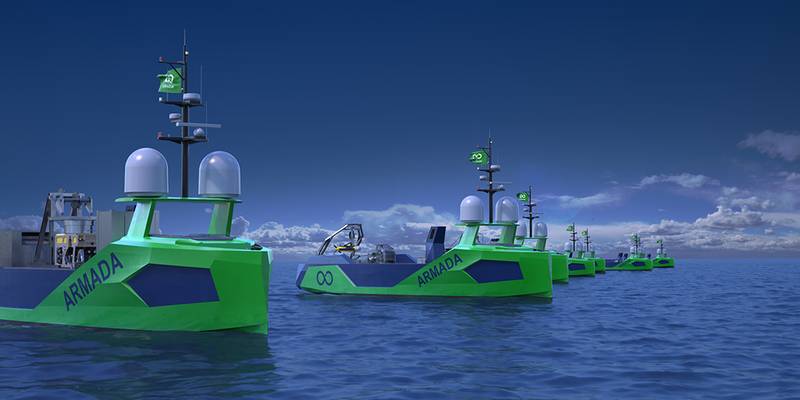 Autonomy in the maritime world is a gradual process implemented in phases, similar to that underway for automobiles. Sea Machines, outfitting the Foss tug, said, “While the Rachael Allen will be delivered with the SM300 and supporting hardware fully integrated into the vessel, the capability of the technology will be activated in stepped phases over the course of six to nine months to ensure full visibility and acceptance from all operational stakeholders.”

The people on board are not going away so fast. As the pace of autonomy quickens, the human elements continue to be addressed. In early June, the U.K.’s Royal Navy, training specialist SeaBot XR and the U.K.’s National Oceanography Center signed a memorandum of understanding (MOU) to create the National Center for Operational Excellence in Marine Robotics, a training center that will be located in Southampton, U.K.

But as all the maritime sectors are now racing toward a greener future, the all-encompassing and role of automation, an ingredient in what is becoming a “virtuous circle”, is now being revealed. LR’s Humphries reiterated this, saying, “Digitization of autonomous vessels can enable transit optimization. Sailing routes, speeds and all destination port handling can be optimized in both financial and emission value terms to the shipowner/operator. Autonomy will also give understanding of vessel health, including predictive maintenance, that can support a marked reduction in emissions through its operational life.” 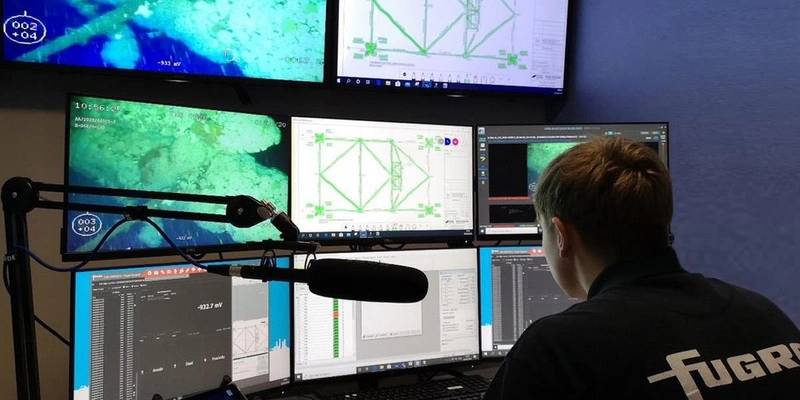 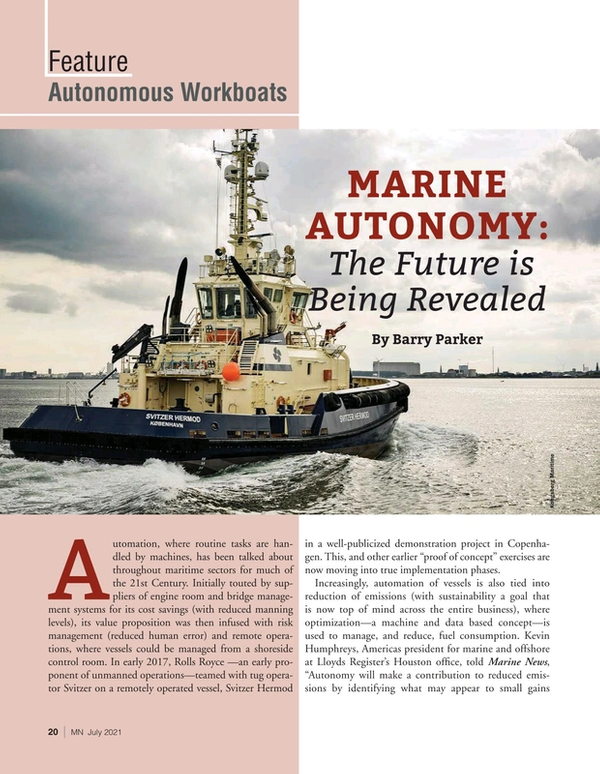 Read Marine Autonomy: The Future is Being Revealed in Pdf, Flash or Html5 edition of July 2021 Marine News

Other stories from July 2021 issue