Galveston-based Callan Marine possesses one of the youngest, most powerful dredge fleets in America. “Our oldest dredge is 11 years old, so we have a nice modern, new fleet, which really helps us in our performance,” said the company’s president, Maxie McGuire. “I’m very proud that we have one of the newest fleets in the industry.”

McGuire and Callan Marine have plenty to be proud of. McGuire, a U.S. Air Force veteran with an Operation Desert Storm tour under his belt, took a job with the U.S. Army Corps of Engineers after discharge before eventually finding his way into the private sector. In his current role as Callan Marine president, he’s helped the family-owned dredging and marine construction contractor prosper, growing from 14 employees a decade ago to 250 today—many of them “hand-picked”.

“All of our staff comes from seasoned positions, and about 75% of our management team, we’ve worked together somewhere along the line in my career. Behind the walls here where we are family-oriented, we are people-centric and that makes chasing the vision that much easier.”

McGuire said the 32-inch CSD General MacArthur (one of Marine News’ top new vessel of 2020) was a turning point for the company. “We made a step change with the addition of the (General) MacArthur (based on its size and capabilities). We won a job from the U.S. Fish Wildlife to renourish Breton Island, which is offshore in Breton Sound south of New Orleans. So, we had this big job to rebuild, I think the second oldest wildlife sanctuary in our country working offshore with the brand-new dredge. It was quite the challenge with all hands on deck.” 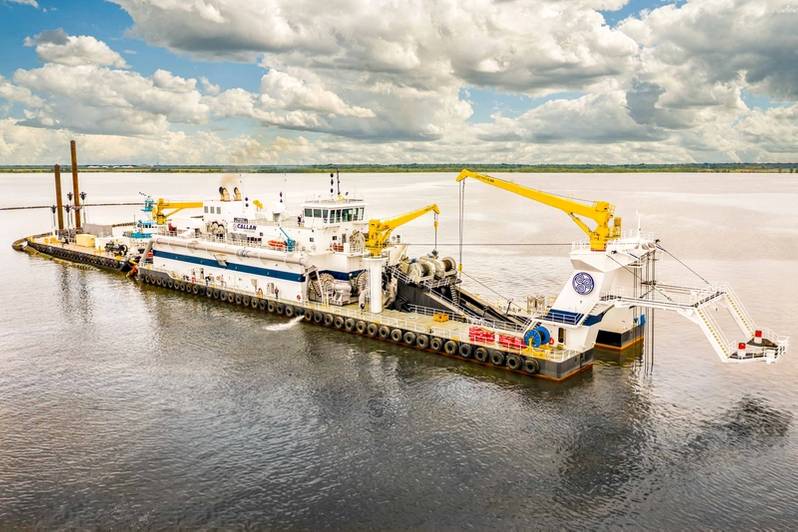 “We made a step change with the addition of the (General) MacArthur (based on its size and capabilities),” McGuire said. (Photo: Callan Marine)

Callan’s expansion is supported by a dredging market that has been relatively strong in recent years. But, perhaps more importantly, the market is expected to continue gaining strength. “It’s been a good market, and I think we have a great outlook in the future,” McGuire said. “We have these ‘deepening’ cycles that come through every 10 or 15 years, keeping up with the nation’s need to serve larger ships. Everything we can do helps our economy.

“The size and number of ships, barges and tugs moving on our waterways creates the demand to have full depth and full width of channels to support commerce. The Corps of Engineers and owners understand that a full draft equals a fully loaded ship, which is the most effective and efficient movement of our commerce.”

McGuire also pointed to opportunities created by a surge of government dollars directed at marine infrastructure projects, like dredging. In some cases, funding for these works is long overdue. “Our country is getting old for the first time, and if you look at some of the older places in the world, they’ve rebuilt their country several times. It’s time to pay attention to our infrastructure (to fix and rebuild it),” McGuire said. “Congress and the Administrations have set the table for funding to invest in our infrastructure, part of which is navigation and flood control, along with very healthy programs with the likes of the state of Louisiana with, with the Coastal Resources and Protection administration in Louisiana. We see very healthy budgets, which gives us a great outlook and a well-funded future.”

Asked about opportunities upcoming for the next 12-24 months, McGuire said Callan will shift between the Gulf and East Coasts regularly. “We’re a pretty mobile bunch,” he said. “It depends on where the projects happen and the time of year. There’s a turtle (nesting) window on the East Coast, so rebuilding beaches tends to happen in the winter months. Overall, I think work is going to continue to focus around (dredging) our waterways and harbors to work on the infrastructure. And I don’t see a pause in the beach renourishments because that’s frontline protection for everyone.” 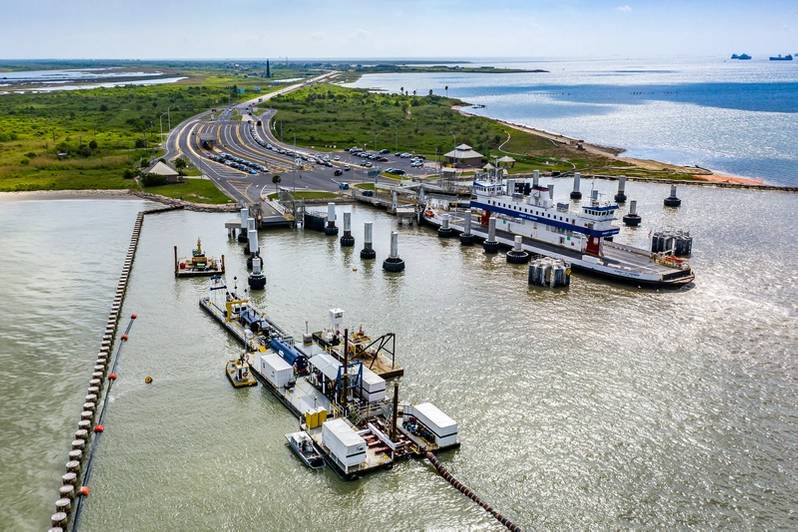 It’s this steady pipeline of work that gives Callan Marine the confidence to build out its fleet and invest in new technologies. And as Callan grows, it is also working to shrink its environmental footprint. “Every time we build a new boat, every time we remodel something, we invest in efficiencies and things to be a better steward of our environment, to be a better steward of our employees, whether it’s mitigating noise or emissions.” McGuire said.

McGuire cited crew safety and fleet efficiency as other key points of consideration for its newbuild activity. “The newer dredges are diesel electric, so it helps us (be more efficient as) fuel burn is one of our largest cost items. Less fuel burned is also good for the environment. When we look at our people, we invest in automation systems to help with fatigue, while also buying them the latest gear and providing the creature comforts on the dredges: full internet, satellite TVs, exercise rooms, individual bathrooms and just about all the food that they want to eat.”

For McGuire, it is clear that the business is all about people. “First you build the right equipment, and we’ve done that. Once we build the right piece of equipment, after that it’s 100% about the people, giving them the tools, the confidence and the culture to create the success.

“I’ve come through the ranks, and I find myself being a champion of the people. I spend a fair portion of my mornings each day, sticking my head in people’s offices to see how they’re doing, and it’s not just ‘lip service’. We know each other’s families and kids and we hope it comes through that we care. (Don’t get me wrong), we do have a business to run; but I think we sincerely support our employees.” 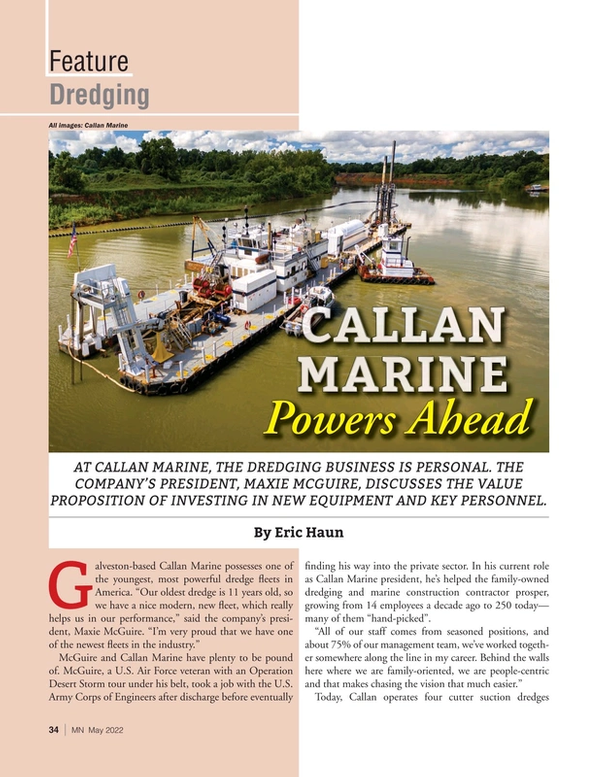 Read Callan Marine Powers Ahead in Pdf, Flash or Html5 edition of May 2022 Marine News

Other stories from May 2022 issue