Tacoma, Wash.-based Silverback Marine is a relatively new name in boatbuilding, formed with the tall ambition to “change the way the world thinks about workboats”.

“We started Silverback with the vision of essentially bringing, what I would call, the big boat experience to smaller workboats. Enabling people to get a smaller workboat, but also have a real naval architect and engineer go through it—give them renderings, give them that tailored experience that you would normally only find if you’re getting a much larger vessel,” the company’s founder, Ian Gracey, said.

Silverback Marine is among a number of U.S. builders aiming to accelerate delivery times by keeping an inventory of stock vessels—which is especially beneficial given the current supply chain issues that are plaguing newbuild projects. “The way the industry is now, the lead time can be anywhere from six to 24 months if you want to get even a basic workboat because most people build to order,” Gracey said. “For our Grizzly, which is kind of like the F-150 of workboats, we premanufacture in production runs of 10 at a time and have them sitting either fully or partially complete. If a customer needs a boat quickly, they can have it in as little as one to two days.”

Silverback’s customers range from ports and municipalities to oil response and tug and barge companies, “anyone who’s in the market for a workboat between 21 and 60 feet,” Gracey said. The company is now in its third year of business, and to date, it has built 51 vessels with four builds currently underway.

In July 2022, Silverback began building what it calls a STS CTV, a crew transfer vessel for ship-to-shore applications. Scheduled for delivery in 2023, the 35’ 5” vessel will be operated by Portland, Ore.-based Shaver Transportation on the Columbia River. “It’s not a crew transfer vessel in the sense of offshore wind. This vessel is designed to bring crew and items from various places onshore out to larger vessels. For example, if they need groceries delivered to a bigger ship, or simply need to get a number of personnel from one vessel to another quickly, then this boat will allow them to do that,” Gracey said.

The vessel will have full fendering, enabling it to sidle up to a larger ship, and push knees for utility work moving floats or any kind of maintenance around the harbor. The wheelhouse will seat up to six people, including pilot and co-pilot plus four crew. It will feature windows and a wheelhouse door from Diamond Sea Glaze and will be powered by twin 300-horsepower OXE Diesel outboards. Among other innovations, the flat deck sheds all water overboard, thus eliminating the need for auto bailers.

The initial design for the vessel was based on Silverback’s standard Grizzly, which is a 21-footer. “Essentially, Shaver gave us a list of the things that they wanted to be able to do, and some rough ideas of the weight, and size, and length that they were aiming to keep within. From there, we drafted up a rough concept. Once that was approved, we contracted Elliot Bay Design Group to flush out the whole gamut,” Gracey said.

Silverback has worked with EBDG on a number of other projects, including a truckable tug, a compact (25’ 10 ⅞” length, 14’ 6” beam 3’ 4” draft) tugboat that can be transported to job sites by truck over the road. Available with either electric, hybrid or outboard propulsion options with up to 500 horsepower, the tug will produce a bollard pull over 12,500 pounds and has a still water range of 60 nautical miles pushing approximately 10,000 pounds at 4.1 knots. The vessel can be operated with a one-person crew and does not require compliance with USCG Subchapter M regulations.

“Elliot Bay has been a very key partner for us because they share our vision that having quality renderings available for people to review is such an important thing, more than just blueprints,” Gracey said. “Their team is very flexible in accommodating customers’ needs. Then, not only is the design side of what they do very good, the actual engineering of it is very good. Often, we will come up with the look of the vessel and hand that off to them to basically translate into a buildable project. That just adds a lot of value to us. We have that freedom to come up with a concept, and then they take it from there.” 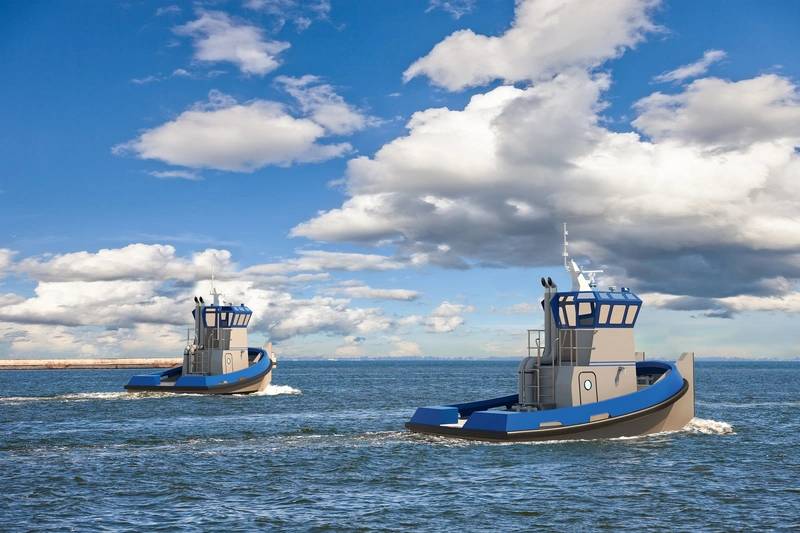 In fact, collaboration is very important for Silverback. “I’d like to see more boatbuilders working together, rather than against each other,” Gracey said, referencing Silverback’s good working relationships with other Pacific northwest builders such as Wooldridge Boats and SAFE Boats International. “We’re able to meet together, talk about ideas, brainstorm, share resources.”

“I think that if boatbuilders could network more, and share resources, do joint ventures, taking the top talents, or the top value offerings from multiple different companies, combining it into one could help a customer realize an outstanding vessel. Boatbuilder A might be really good at one thing, and boatbuilder B might be really good at another. If you could get a meeting of the minds, and get those people to collaborate and cooperate, that’s where we’ll see a catalyst for change in this industry.”

Gracey said that Silverback, as still a relatively young name in the industry, is looking to gain people’s confidence as it eyes opportunities for growth. “We would like to increase awareness with government agencies, and go after the multi-vessel contracts,” he said. “But it’s usually the old established builders that [win these contracts], just because they’re the ones that have been around.” 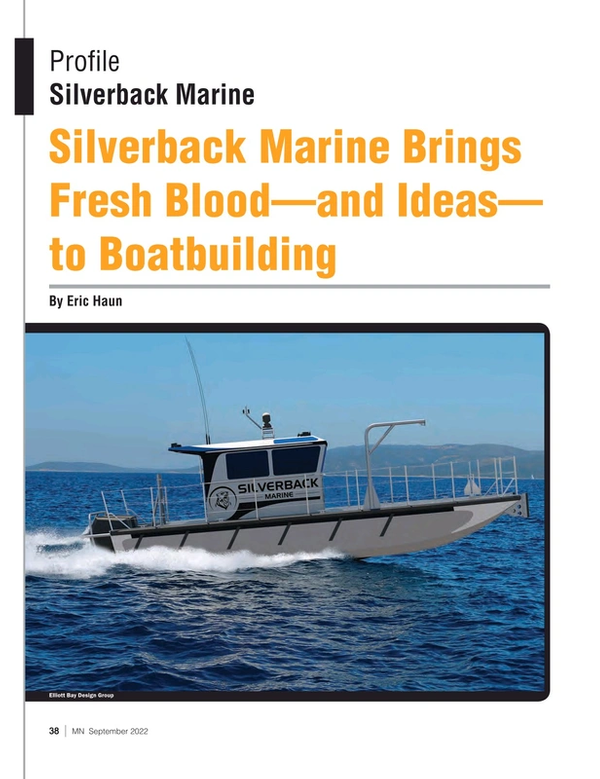 Other stories from September 2022 issue