Fortunes Return to the Sea as the Wind Blows Offshore

The results of fortunes and failures are often described as a “perfect storm”. The COVID pandemic, domestic inflation, labor issues and current geopolitical events have brought that description to a peak. A promise of a “new normal” emerged post pandemic, with a vision of alternative energy, alternative fuels and alternative supply chain logistics to help toward solving some of the problems, heralding a world of change with reduced emissions, government support and the end of fossil fuels as we know them in energy and marine operations.

With those promises came big movements in the U.S. offshore wind industry, which aims to tap into an estimated gross resource potential of 10,800 gigawatts (GW) of wind capacity along the U.S. East Coast and Great Lakes (U.S. Department of Energy, 2016), the actual technical resource being 2,058 GW of power. U.S. maritime interests jumped in with both feet, and the Zoom meetings held between European offshore wind operators and domestic builders and operators burned up the Internet. We at Alternative Marine Technologies (Amtech) Zoomed with many of them amid a rush to contract new construction. Many of vessel designs had never been built in U.S yards, and some companies did not understand U.S shipbuilding and operation.

The speed of the response is not surprising. Europe boasts more than 6,000 operating wind turbines, and the United States only seven. With our involvement, Amtech watched as delivery for offshore support vessels were scheduled to arrive long before major machinery could be delivered to the shipyard or any wind farm towers would actually be erected—a result of supply chain and labor issues experienced during the pandemic period. These challenges, of course, follow previous wind farm delays, politics, cost overruns and issues experienced with Cape Wind, Deepwater Wind and other failed attempts to enter the emerging industry in the United States.

But the industry took a step forward in 2021 when the Biden Administration announced a target of 30 GW of offshore wind by 2030 (for reference, the U.S. currently has just 0.042 GW of installed offshore wind power). With that announcement came the canceling of the Keystone pipeline and a moratorium on drilling and oil leases in the U.S Gulf. The reports and the politics seemed to be working toward a final nail in the coffin for the U.S. Gulf oil patch, where, ironically, this country’s companies, skilled labor and experience of installing, maintaining and servicing operations offshore exists. Further ignored were the hundreds of support vessels, jackups and platforms in layup, many capable of supporting offshore wind.

The Administration and Department of Energy reported four to six wind turbine installation vessels (WTIV) would need to be built in the United States. The first WTIV was contracted at Keppel AmFELS in Texas in 2020 with a delivery date of 2023 and a reported cost of $500-600 million. Maersk Supply Services has announced the construction of another WTIV for the U.S. market, but it will be built in Singapore by Sembcorp Marine, with the steel-cutting ceremony set for the fourth quarter of 2022. Patented by Maersk Supply Service and designed in-house, the wind turbine installation solution is said to work in conjunction with new feeder technology that is expected to be over 30% more efficient than conventional jack-up vessels while meeting Jones Act requirements. Just for emphasis, the WTIV will be built in Singapore, scheduled for delivery in 2025. We could continue with service operation vessels (SOV) and crew transfer vessels (CTV) under contract and resting in U.S shipyard reported backlogs. Understand the majority of these projects were developed from 2019 to 2021 during the pandemic period when many around the world walked to work in sweatpants to their living room. Many projects have not calculated the steel and aluminum price escalations or the delays due to lack of experienced labor and machinery delays. Those of us who were in the shipyards and building during the period have experienced the pain. Our concern, which is shared by others, is how these issues can affect the cost of our electricity if we continue moving forward at this pace.

As most seafarers understand, a storm has a mind of its own and is capable of changing track and intensity without notice. Geopolitical events in Europe recently changed the direction of oil and gas, and with that the cost and availability of fuel worldwide. The problem is well beyond U.S. gas prices or the lack of demand due to electric vehicles and looks to be an issue we will be dealing with for some time. The cyclical nature of shipping markets and how they react to world geopolitical issues will have a huge impact on how the U.S Gulf domestic oil industry and the current Administration reacts to the prices and imbalance. The situation is ironic. Europe with 6,000 turbines boasts the lead in clean energy but suffers economically due to dependency on a disrupted foreign oil source. Meanwhile, the United States, capable of domestic energy independence, will suffer economically due to massive efforts to build and produce alternative clean energy at an expedited pace. The truth at the 35,000-foot level is that the oil spigot cannot just be turned off and closed. The term and definition of hybrid could not be more important at these energy crossroads. Alternative energy and historical energy must work together to efficiently enter a post carbon world. After all, it is a perfect storm.

The past three years have taught us lessons that affect those of us working below the boardroom and elected office levels. We see more of those lessons coming as we try to solve the problems of placing all of the eggs in one basket in the decision process. At this point, the country does not understand “climate change”. The discussions are fuel- and emissions-based in the maritime sector, yet we are dealing with drought and depleted water levels in the Mississippi River affecting the movement of our food sources and other vital resources. Turn the climate change page and another group is providing data to document an exponential sea level rise. Work inland and it is tornados and 100-year storms. The science continues to surprise us.

As the global energy crisis continues and the country decides to venture back into drilling to support domestic energy in the U.S Gulf and lower the price of gasoline, do we have the skilled labor and shipyard capacity to build and support both offshore wind in the Atlantic and the oil patch in the Gulf? Some 40,000 new jobs are projected for offshore wind while most of the country posts “Now Hiring” in the office window.

As we look to satisfy the environmental sector, reduce emissions and meet alternative energy goals, how long will it be before the proponents of climate change and the Administration understand that offshore wind energy is being supported and maintained by vessels burning marine diesel and gas oil? During the development of Cape Wind, the U.S. EPA worked to limit diesel emissions at the wind farms due to the projected vessel activity at the site. Are we smarter now to understand that the pace of energy transition needs to satisfy proponent and opponent? Can we design hybrid in transition and satisfy both groups? We think it can and it should be at the forefront of the discussion. 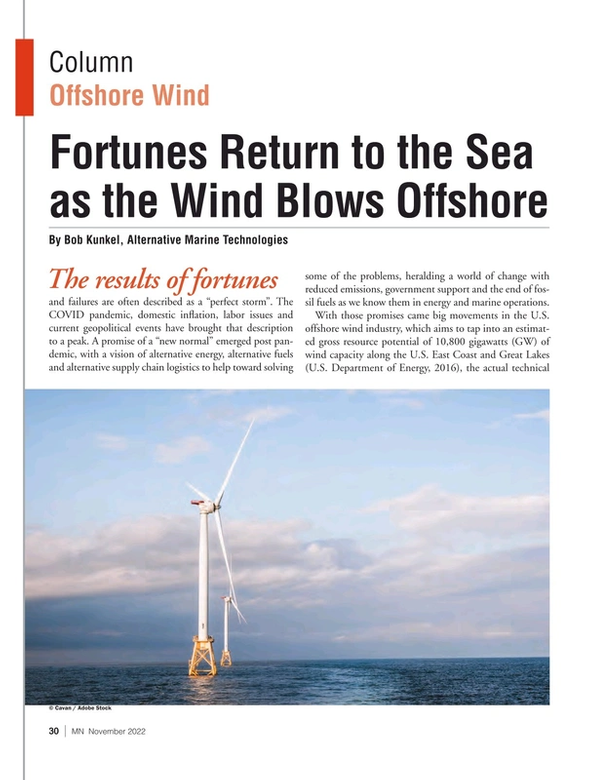 Read Fortunes Return to the Sea as the Wind Blows Offshore in Pdf, Flash or Html5 edition of November 2022 Marine News

Other stories from November 2022 issue