All four VLCCs classed are fitted with an inert gas system and incorporate various grades of higher strength steel in their construction.

Classed in September was the twin-screw Seabulk Magnachem, a catamaran tugboat designed to operate as part of a rigidly integrated tug-barge unit. The 116- foot-long tug, with a diesel drive totaling 14,000 bhp, propels a 582- foot-long barge by fitting securely around the stern of the barge.

The unit is held rigidly in place by a system of hydraulically operated wedges. The United Statesflag tug was built by Kelso Marine, Inc., Galveston, Texas, for Central National Bank of Cleveland as Trustee, Cleveland, Ohio.

Also classed, and designed as part of a rigidly integrated tugbarge unit, was the twin-screw Valerie F, built by Southern Shipbuilding Corp., Slidell, La., for Intercoastal Bulk Carriers, Inc., San Francisco, Calif. This 151- foot-long tug, with a diesel drive totaling 16,000 bhp, is secured by means of a system of hydraulically operated wedges and jacks into the stern notch of a 620- foot-long barge.

The American Bureau of Shipping is a nongovernmental, worldwide ship classification society which establishes internationally accepted standards, called Rules, for the design, construction, and periodic survey of merchant vessels and other marine structures. 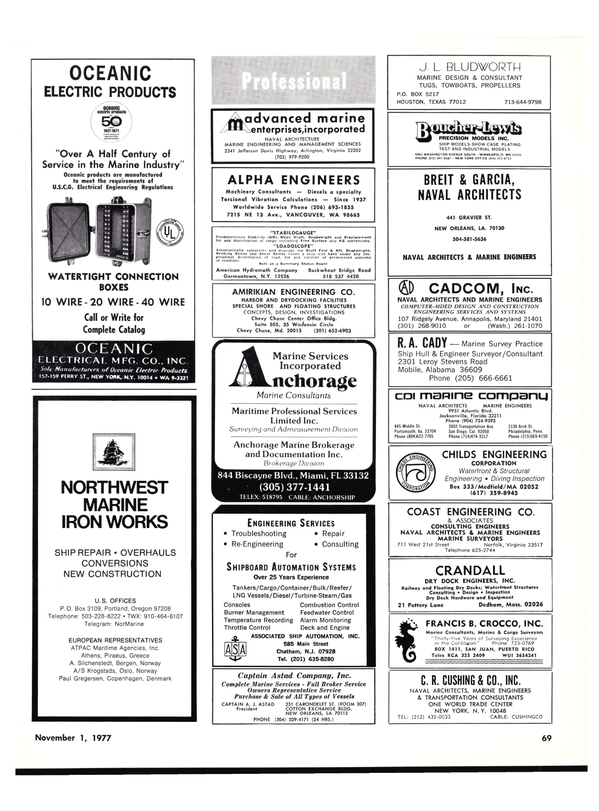