Am-Can Transportation, Inc. recently announced the introduction of a new tug-barge service to Great Lakes shippers. With the tug-barge, Am-Can will provide service to both line haul and to side port shippers, concentrating on fast, reliable service to small shippers presently operating from restricted waterways harbors.

Am-Can's first tug-barge unit will begin operation at the beginning of the Great Lakes shipping season in 1981. The barge is a 22,000-ton dry cargo barge at 27 feet FW. The dimensions are 575 feet long, 75- foot beam, and 45-foot depth. The construction is double skin. The total cargo area is 800,000 cubic feet. The cargo holds are divided into five compartments, allowing for the separation of cargoes and making split loadings possible. The cargo holds are fitted with MacGregor "Rolltite" hatch covers that roll back, leaving the full hatch opening.

The entire unloading system will be monitored and controlled by one man from the supervisory control room on the deck.

The barge is fitted with mooring winches and chocks that allow easy shifting of the vessel along the dock. This permits distribution of the cargo on the dock for more efficient handling.

The barges are being constructed to ABS, and USCG class and certificate.

The barge will be pushed by a brute, a 9,000-horsepower tugboat, twin-screw, sitting in a deep notch, 67 feet deep. The tugboat is twin screw with Kort nozzles. The tugboat, which is presently being retrofitted with an upper wheelhouse for this service, is on a long-term charter from Nolty J. Theriot, Inc. of Golden Meadow, La. The tugboat is 150 feet long by 40-foot beam by 19-foot draft. It is equipped with the latest communication and electronics equipment for worldwide operation. The tugboat is classed for ice service ABS, and Maltese Cross, worldwide towing service. The boats, built in 1975, were among the first big U.S.

tugboats to enter service in the North Sea.

Theriot operated these tugs in service to the oilfields in 50-foot seas and gale force winds, while handling anchors and moving tows.

The twin-screw tug will be aided by two 600-horsepower bowthrusters in the bow of the barge. The bowthrusters will operate at light draft on the barge, as well as loaded draft at slower running speeds, increasing safety and control of the unit.

The first tug-barge unit is scheduled to arrive in the Great Lakes at the opening of the Seaway 1981. The second unit will arrive in the Lakes approximately five months later. Negotiations are now underway with shipyards for the barge construction. 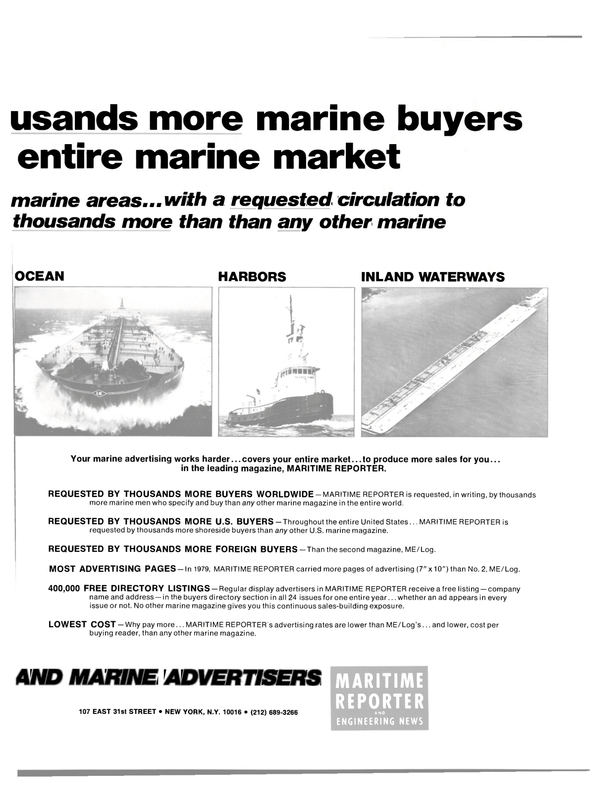 Read Am-Can To Start Tug-Barge Service On Great Lakes In '81 in Pdf, Flash or Html5 edition of February 1980 Maritime Reporter

Other stories from February 1980 issue