The Ro-Ro '80 meeting will provide an integration of Conference and Exhibition in the same manner as the previous gatherings— Ro-Ro '76 and Ro-Ro '77, held in London, England, and Ro-Ro '78, held in Hamburg, West Germany.

Each of these conferences attracted more than 700 participants from the international community— shipowners, port operators, equipment suppliers, engineers, naval architects and others interested in this form of transportation.

Ro-Ro '80 is expected to be even more successful. More than 40 international companies will be exhibiting the latest ro-ro technologies and services during the three days of the Conference.

However, the roll-on/roll-off concept remained localized in the form of ferryboats, carfloats, etc.

Economics i n d i c a t e d that the space consumed by the undercarriage of wheeled vehicles was not conducive to efficient use of ship cargo space. This concept held true when manufactured goods were being moved between industrialized countries. The world of trade has changed in the past 30- 40 years and thus the roll-on roll-off ship was developed to meet changing needs. The first major use of roll-on/roll-off ships was between the Scandinavian countries.

These were basically glorified ferryboats. Now, such ships are a major factor in international trade.

Ro-Ro '80 will reflect the current concern for profitable and full employment of the new tonnage being built. The Conference in its ship operations and design sessions will emphasize a further factor — ship utilization — focus- ing on possible new routes and trades.

The Conference will have five technical sessions, starting with Session 1 on April 15 dealing with R o - R o O p e r a t i o n s and Trades.

Session 4, to be held in the afternoon of April 16, will deal with Mediterranean ro-ro operations.

On April 17, at the start of Session 5, a film will be shown on the operation of self-sustaining container ro-ro vessels. Nigel J.

Tatham, director, Sea Containers Services Ltd., London, will introduce this film. The rest of Session 5 will deal with ports and terminals.

The instigator of the portable linkspan, John Rose, managing director, Marine Development (Glasgow) Ltd., UK, will talk about simple systems to be applied to the totally committed container port whose present economics he q u e s t i o n s . Douglas Ross, president, CTEC Company, Bellevue, Wash., will present a paper on the application of articulated steering on terminal tractors.

The social activities will include a reception to the delegates by the Principality of Monaco in the evening of April 15. A second reception for the delegates will be held on April 16.

The focus of the Ro-Ro '80 Conference will be truly international —looking at many of the main traffic areas where new thinking and innovative use of the ro-ro mode have been applied. These range from the home waters of the venue, the Mediterranean, to as far afield as the Caribbean and other new ro-ro routes to developing countries.

Although ro-ro ship design has progressed considerably from the first North Sea applications, there are some major design problems still to be solved, especially in the light of ever increasing ship costs.

These and some new systems will be debated at the meetings.

From the port viewpoint the progress in ro-ro berth design has been equally dramatic, but often costly where ports have specified rashly in both equipment and systems which have been incompatible with existing infra-structure and future planned developments.

Previous Ro-Ro Conferences have brought the state-of-the-art forward a step and Ro-Ro '80 will be no exception.

In addition to the Conference and Exhibition, there also will be technical tours to ro-ro facilities and ships. 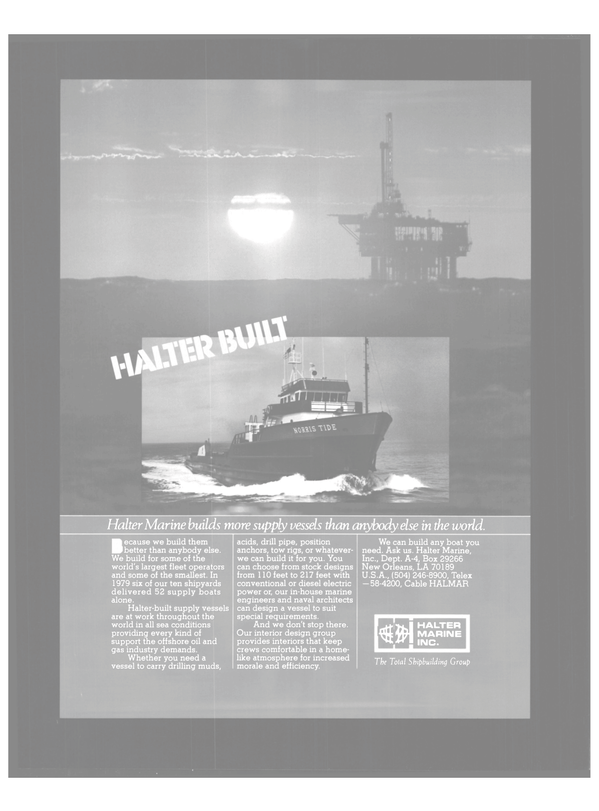 Other stories from April 1980 issue