Newport News Shipbuilding reported net earnings of $24 million, or $0.75 per diluted share, for the first quarter of 2001. Earnings before interest and taxes (EBIT) for the quarter were $51 million, up from $47 million last year. "We are pleased to start 2001 with a continuation of our very strong financial track record," commented Chairman and CEO William P. Fricks. "Performance gains across our major programs have resulted in revenues and earnings that exceeded our earlier estimates. As a result, we are increasing our 2001 EPS estimates by 10 percent over prior guidance of between $3.05 and $3.10 before any transaction related expenses associated with the proposed acquisition of Newport News by General Dynamics Corporation." Newport News posted first quarter revenues of $485 million, up from $469 million in the first quarter of 2000. The favorable revenue comparison was driven by strong gains in the Construction segment. "First quarter 2001 Construction revenues advanced 12 percent compared to the first quarter of 2000," said Fricks. "Increased volume on the Virginia-class submarine program coupled with the build-up on the new CVN 77 carrier construction contract drove the growth in this seg- ment." Fleet Services revenues of $185 million decreased slightly as the Nimitz refueling and overhaul approaches its mid-2001 delivery date. "Revenues will start to trend upward in Fleet Services later in the year as we begin the refueling and overhaul of the carrier Eisenhower," noted Fricks. "Our Engineering segment's revenues of $67 million were consistent with the prior year's quarter." Newport News' backlog increased to $6.9 billion at the end of the first quarter with the $3.8 billion contract award for CVN 77 in January 2001. The company expects another significant addition to the backlog during the second quarter with the signing of the Eisenhower refueling and overhaul contract lowing the announcement of a definitive agreement for GD to acquire NNS in a cash tender offer for all NNS's outstanding shares. The transaction is valued at approximately $2.6 billion, including approximately $500 million of existing NNS's debt. GD, continuing the consolidation process of the defense sector, plans to acquire NNS in a transaction that will combine its Navy shipbuilding and submarine business with the submarine and aircraft carrier businesses of NNS. This transaction would make GD the sole supplier of submarines and aircraft carriers for the U.S. Navy.

Moody's review will focus on the strategic benefits of this transaction for GD as well as on the potential synergies of combining the shipyard operations of the two companies. These potential synergies will be considered in the context of any limitations or requirements that may be imposed by regulators or the DOD as part of the approval process for the transaction. In its review, Moody's will also consider the challenges which GD may face in integrating NNS into its operations, and the company's ability to avoid the difficulties that have occurred in other recent business combinations in the aerospace/defense sector. 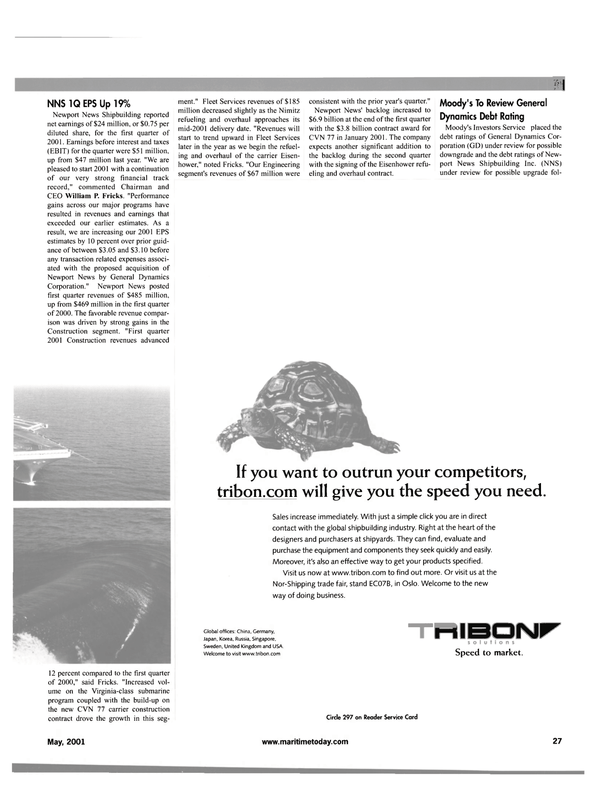