Caterpillar Motoren GmbH & Co. KG in Kiel, Germany played a large role in the high worldwide demand for marine engines in the record year 2000. Sales of MaK engines were up by approximately 40 percent, the largest order intake in the company's history.

All new MaK long-stroke engine series M20, M25, M32 and M43 were part of this success. The number of M43s sold has exceeded 100, just two years after market introduction. The M32 continues to show its exceptional market acceptance by having sold more than 500 units since its introduction.

The intake of orders during the first two months of 2001 continued the upward trend. This healthy order book has created a solid basis for the increase in Caterpillar Motoren's net sales in 2001. Caterpillar Motoren won an order for four diesel engines type 6 M 43 with a total output of 22,000 KW.

The engines will provide propulsion to the world's largest anchor handling vessel and will be delivered in September 2001.

Caterpillar Motoren will also supply each of seven 2,500 TEU containerships with three MaK 8M 25. These ships will be built by SSW Fahr-und Spezialschiffbau GmbH, for E.R.SCHIFFAHRT GmbH & Cie. The engines will provide auxiliary power and will be delivered starting in August 2001. 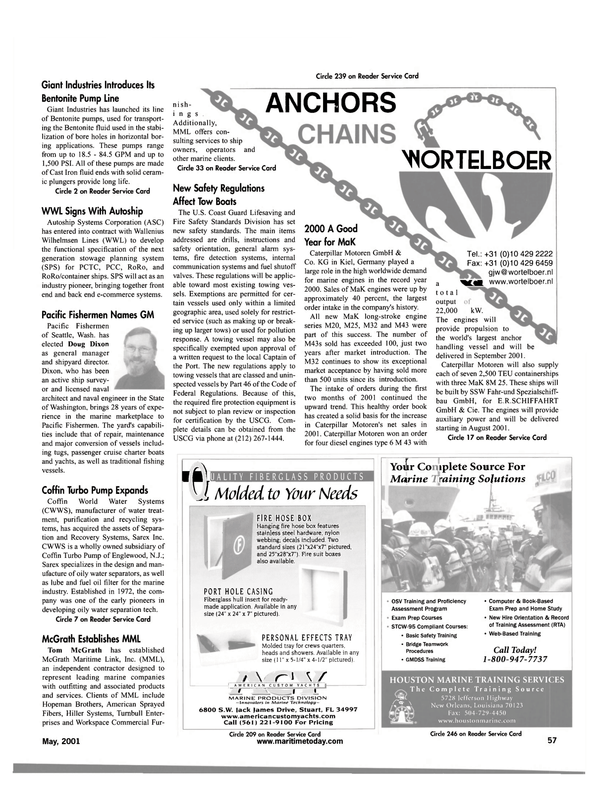