Last month MarineNews was on hand in Houma, La., for a festive double celebration marking the delivery of a pair of high spec 95-ft. towboats for LeBeouf Bros. Towing.

To say that Jon Gonsoulin knows how to throw a party is an understatement. The ubiquitous president of LeBeouf Bros. Towing, LLC of Houma, La., hosted a double delivery celebration without compare last month at his home; one which saw LeBeouf and Gonsoulin welcome the MV Karl Senner and MV Dickie Gonsoulin to the LeBeouf Bros. fleet.
The party was unique not simply because of the arrival of the two new boats from the company’s own Bourg Dry Dock, but also because it went beyond steel, machinery and paint; signifying a business relationship between Karl Senner LLC and LeBeouf Bros. Towing that spans more than 40 years.

Geared for Success
The inland towing business is filled with history, characters and long tales of business partnerships, and the partnership between LeBeouf Bros. Towing and Karl Senner LLC – forged more than 45 years ago between Karl Senner and Dickie Gonsoulin – is one such story. Created by Karl Senner and Dickie Gonsoulin and extended today by Ralph Senner and Jon Gonsoulin, it all started in 1967 aboard the M/V Mary R, which was a single screw tugboat purchased by LeBeouf Brothers Towing after its incorporation in 1944. Mary R was originally powered with an Atlas six-cylinder, 160 hp engine. In 1955, the vessel was repowered with an Enterprise 6 cylinder inline “M” engine rated 400 hp at 800 rpm. Mary R sank in 1957, and after the vessel was recovered from the waters of Texas City harbor, it was refurbished and placed back into service.
In 1967, Karl Senner sold his first Reintjes gearbox for installation in the United States to LeBeouf Brothers towing. The Reintjes WAV 721 gearbox was installed in the Mary R for use with the Enterprise 6 cylinder inline “M” engine. The Mary R operated successfully with no major repairs to the Reintjes gearbox from date of installation until the vessel was taken out of service in December 1981.
The gearbox was summarily pulled out and returned to Karl Senner, who cleaned it up and made it a centerpiece of the company exhibit at the Workboat Show in New Orleans. While it eventually was returned to Reintjes in Germany for display, last month, there it was again at Gonsoulin’s home in Houma, on display at the double delivery celebration.
For Ralph Senner and his family, who were out in force with hundreds of invited guests, the tribute to his father and family was clearly moving, as this is the first boat to bear the name MV Karl Senner. Gonsoulin said the tribute to Senner and his father, Dickie, was clearly appropriate.
“Considering that Mr. Karl and dad were very dear friends for all of these years, it’s a befitting time with the delivery of sister boats to have them both be named in their honor.”

The Yard
While the long business ties provided a nice backdrop, the center of attention literally and figuratively are the boats. In an interview earlier this summer, Gonsoulin repeatedly stressed the high level of finish on his company’s new boats, a strategy that helps the company recruit and keep its quality crew in a time when quality crew is at a premium. Upon closer inspection, the vessels appeared even better outfitted than Gonsoulin let on, with spacious and well-appointed accommodations, an ultra modern galley area with granite countertops, and a state-of-the-art gym.
Gonsoulin currently builds for himself at Bourg Dry Dock, a shipyard he started in 2005 in the wake of hurricane Katrina, when a local shipyard who had bid on one of their jobs essentially said they could not bid the project. “Having your own yard allows you a lot of flexibility,” Gonsoulin said. “It might cost a bit more in the short term, but in the long term, building yourself, building it better to your spec, it makes a lot of sense to me to build it stronger from the beginning.”
Jon is third-generation in the business, and he said the decision was made to start building boats in-house back in December of 2005. “That lit a fire under me to build my own equipment. I started building my own tank barges. The first two barges were delivered in Q1 2008, and we’re about to launch barge 537, so we’ve built 37 barges between 2008 and now.”
While attracting the right people to crew the boats is essential, so too is attracting shipyard talent, and Gonsoulin feels he has one of the best in the business running his yard, 33-year veteran Bobby Bartel.
Bartel worked for 27 years at Quality Marine, and another five at Gulf Island, before joining forces with Gonsoulin in 2012 to run Bourg Dry Dock, which today employs about 250, has the capacity to build four or five boats and about 10 barges per year. “I like building towboats, and he had a nice panel line,” said Bartel, explaining why he decided to join Bourg. “It’s a nice family run operation and I thought it was a good time for a change.”
For a boatbuilder, the Gonsoulin philosophy is a welcome one, in that he believes investing a bit more upfront –  whether it be on thicker steel plate for sturdier barges or a more rugged Reintjes gear to ensure decades of trouble-free performance – is the prudent financial move for companies that make a living moving product on the waterways, versus companies that view their boats and barges are mere assets to be bought, sold and traded for financial gain.
“It’s simple,” Bartel said. “Jon tells me to build it right, and that’s what we do.”
While Bourg Dry Dock traditionally has built only for LeBeouf Bros. Towing, Bartel said it is currently building four barges for other customers, and is also considering additional outside orders for boats and barges.
The M/V Karl Senner and the M/V Dickie Gonsoulin are Entech & Associates Inc.-designed boats, the second and third of a five boat series, all measuring 95 x 34 feet. MV Karl Senner has Mitsubishi S12-RY2MPTK-3 power and the MV Dickie Gonsoulin is powered by Caterpillar 3512s. All, naturally, will have Reintjes gears. Start to finish, each boat took about 11 months to build, Bartel said, with the Karl delivered in July 2013 and the Dickie, in September 2013. Bartel said there weren’t any unique challenges to building the boats, other than ensuring that they were nice, live-on friendly vessels. 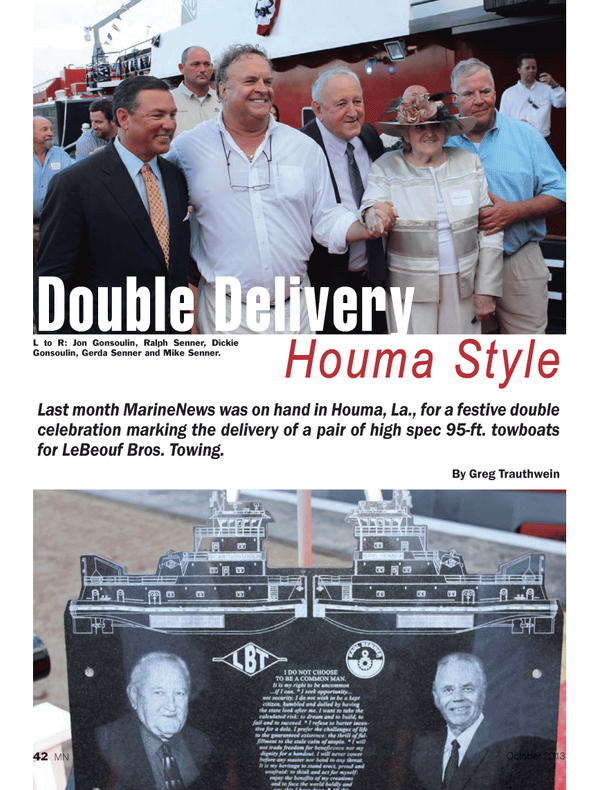