Transas, Seaways Europe & Serco Marine: Working together to create the world’s best tug simulator, and along the way training Tugmasters in the absence of the actual vessels.

When UK-based Serco Marine Services acquired 29 new vessels from Damen to replace older assets and augment their growing fleet and contract obligations, they also knew that that they simply could not wait until the boats arrived to begin training their tugmasters in the fine art of ASD operations. Serco Tugmaster and National Training Manager Steve Sandy eventually turned to SeaWays Consultants to get help with that training. Utilizing the cutting edge, Transas-built Seaways Tug Training Simulator, neither Serco nor Sandy has ever looked back with regret on that decision.
The foundation for that trust was laid in 2008 when Serco agreed to collaborate in a remarkable training program for the masters of the new vessels. In a nutshell, the SeaWays Tugmasters Training Program was developed over a 15 year timeframe, is well-proven and internationally recognized. Serco’s big challenge was to prepare existing marine personnel for the arrival of as-yet undelivered ASD and ATD tugs. Adapting to new propulsion technology and forward-thinking manning and operational performance standards, especially in the absence of those vessels, would not be easy. That’s where SeaWays came in. Here’s why, and how:

Defining Requirements to Meet Solution
Training to SeaWays and Serco standards involves both on board and simulator training. But, Serco and Sandy had as many as 66 masters and 22 admiralty pilots to train; something that Sandy told Transas User Conference (2013) attendees could take as much as 58 days on board (each), if done all live with no simulation involved. And, according to SeaWays, Tugmasters had to master 22 different skill sets before moving on to their on board assignments. The key issues facing both SeaWays and Serco on how to train while awaiting the vessels were many and they included the metrics included in Table 1.
For its part, SeaWays had set out to create what they hoped would eventually be the world’s most sophisticated, realistic and variable Tug Simulator known to man. That journey to find a simulator provider took them all over Europe, spanning more than two months and visiting as many as five different vendors. Unimpressed with the visuals, vessels available, interaction and support offered from others, SeaWays ultimately found Transas. It was at the Transas St. Petersburg offices where SeaWays personnel and the team at Transas developed a 78 point plan of improvements to be put into action and a continual relationship was cemented to develop what Steve Sandy calls, “The best tug sim in the world”. That would not be easy. The SeaWays/Serco wish list contained many metrics, as depicted in Table 2.

The Best Tug Simulation in the World
From out of Serco’s specific training needs and SeaWays’ exacting requirement for realism came the Transas-built Seaways Tug Training Simulator. And, there is literally no end to the features of the high-tech training device. The simulator, for example, realistically duplicates, “tug washout at stern”, produces an Active Escort Model and as many as 15 hours of actual at sea data is collected for each tugboat to give the most realistic training effects possible. According to Steve Sandy, the Simulator even shows masters how the length of towline is a factor of bollard pull at different angles. All of this was modeled and because SeaWays insisted upon it, the simulator training includes depth perception and 3D effects.
Compliant to all acknowledged industry standards, such as ISM, ISO, USCG, UK MCA, STWC and PMSC, the simulation program was developed and defined based on specific, pragmatic and well illustrated training manuals. Training is structured to ensure that no common operational practice or risk is overlooked and records results to show that training was undertaken to the required ‘defined’ standard, which is subjectively assessed. The last part is especially valuable in the event of investigations that may result in a claim or penalty on the tug operator.
Delivering training via simulation is extremely cost effective when considered against manning costs, fuel consumption and engine hours saved by fast tracking the training via an experienced professional trainer. Beyond this, the simulator ensures that tug masters are taught to drive in such a way as to gain the most out of the tug and to be able to operate tugs in a safe, relaxed and competent manner under the most challenging of circumstances.

End Game: Formal Endorsements for Tugmasters
A global move towards formal endorsements for tugmasters to operate tugs is gathering steam. Similar to what currently applies to Pilots, DP Operators, High Speed Ferries and other specialty disciplines, the  certification(s) eventually could be further distilled down to other specializations such as General Towage - CTS Tugs, Work Boats Barge Work, Ship Assist Towage – Omni-Directional Tugs, Ship Assist Harbor Towage, and Sea Towage – Long Haul Towage, Salvage & Offshore OSV. When that does happen, no doubt SeaWays and Transas will in the thick of it as training modules are developed, refined and standardized. The initiative should be a positive for Tugmasters and Pilots, who, via structured and defined training, will ensure a common level of competency of tugmasters.
Simulator layout and equipment set must now be adaptable for multiple vessel types and purposes – navigational and engine rooms alike – including, but not limited to Tugs, Offshore Vessels, Cruise Ships, Naval Ships, LNG and a host of others. As simulation training evolves, however, the need to keep the price reasonable for the increasing numbers of mariners who need it will be just as important.
Finally, effective mariner training of mariners – no matter what their specialty – must include both on board lessons and time spent in the simulator. But, as Transas European Sales Director Evgeny Drumachik recently told more than 250 customers at this year’s Transas Users conference, “No longer will industry accept learning on generic simulation platforms. The move towards the ability to swap out equipment and controls, to duplicate and closely mimic actual conditions at sea for the customer’s own equipment, will be very important.” Serco and Seaways Europe certainly didn’t accept anything less. Neither should you. 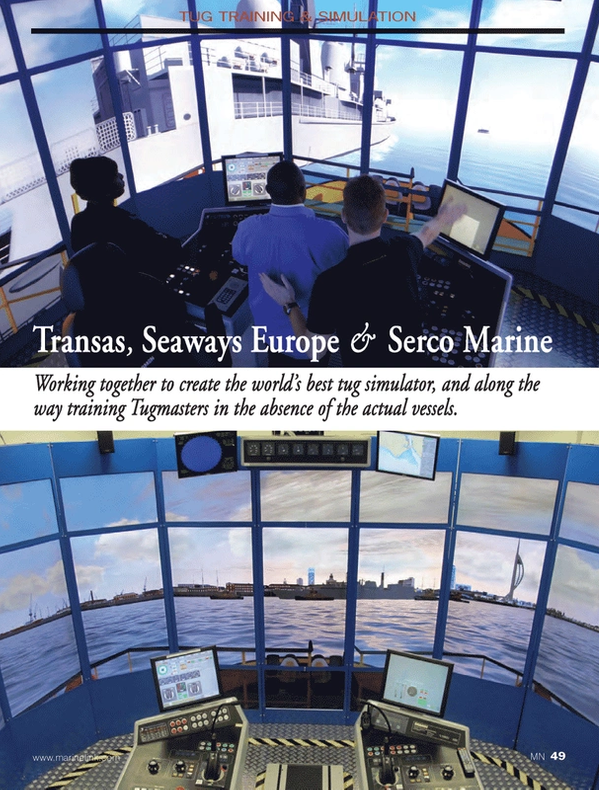