Utility, functionality, and safety all come together in David Clark’s wireless headset communication systems. For the soon-to-come North American Offshore Wind boom, there are lessons to be learned here, from across the great pond.

When Mantsbrite became the sole U.K. distributor of the David Clark Marine Wireless Headset Communications Systems in 2012, one of the first users was Tidal Transit, a fast growing North Norfolk company providing a new generation of personnel transfer vessels for use by offshore wind farm developers. That’s because Tidal Transit selected Mantsbrite their first two state-of-the-art, purpose designed and built vessels with the best navigational aids available to enable the vessels to function safely and efficiently in the unfriendly waters of the North Sea.
Mantsbrite’s Managing Director David Ash told MarineNews that one of the key factors in operating safely at sea is clear and interference-free communication. The David Clark system, ruggedly manufactured from marine grade components, enables users to enjoy clear, crisp reception within a range of 100 meters. Beyond this, he added, “Being hands-free, they greatly enhance mobility as there is no need for crew members to be tethered to the vessel.”
Tidal Transit’s Director Leo Hambro echoed those sentiments, saying “These Communications Systems have been invaluable.  When we carried out a man overboard rescue exercise recently, the crew member on deck was able to move freely, giving very clear instructions to the crew on the bridge, thus avoiding accidental harm to the ‘man’ in the water. Fortunately, we haven’t experienced such an incident, but with the David Clark wireless system, we are confident that our crew-to-crew communications can make a huge difference in both normal and extraordinary circumstances.”
With Tidal Transit’s first two vessels, the ‘Ginny Louise’ and ‘Eden Rose’, having been in continuous use in offshore wind farms service since delivery, Hambro and his crews have had ample time to evaluate the utility of the new communications systems. As a result, a third vessel – due to arrive in May 2013 – will also be outfitted with the equipment by Mantsbrite. While the offshore wind boom hasn’t quite arrived in U.S. waters just yet, lessons already learned across the pond are worth noting, before it does.

Set Up & Installation
Perhaps one the most attractive aspects of the David Clark wireless system is its ease of installation and, subsequent to that, ease of use. The basic layout of the system typically entails a Skipper at the helm, equipped with a desk mounted microphone and speaker. As many as three mobile crew can be equipped with wireless headsets. According to the Master of the Eden Rose, no issues were encountered with the setup of the headsets. He added, “This also goes for learning how to use them. We simply donned the headsets, switched them on and they were ready to go.”

General Use & Utility
The need for a wireless solution as opposed to a ‘wired’ headset system was paramount for this operator of wind farm vessels. That’s because the wireless version provided flexibility, mobility and freedom from entanglement with other equipment. The Eden Rose Master insists, “Wires would be a disaster in this environment. The less wires; the better, especially since deck tasks involve every area of the vessel.”
Wind Farm crews are typically outfitted with a number of PPE items, that at times, can be cumbersome. According to Tidal Transit’s Hambro, maintaining mobility and freedom was a key metric for those involved with choosing the David Clark system. Deck crews need the flexibility that the wireless system offers to enable them to freely walk around the vessel, and the nature of their work means that they need both hands free when transferring passengers or cargo, especially in adverse weather. For his part, the Master needs a wireless system in order to use both hands to maneuver the vessel into position on the ladders and then keep it there safely whilst passengers transfer.
Hambro says that the wireless system has to be easy to use, waterproof, durable and the reception has to be loud and clear, it should enable the crew to go about their duties on deck in severe weather or calm seas on a hot day with the minimum of disruption to their work and they should be able to talk and listen to each other as if they stood next to one and other. The battery life should ideally last a full twelve hours of continuous use. For Tidal Transit, the David Clark wireless solution fit the bill nicely.

Safety at Sea: Real Life Utility
For Tidal Transit, safety of personnel is paramount. The need to issue clear instructions via the headsets is therefore very important when, for example, pointing out hazards to personnel on deck or passing gentle reminders regarding general operating procedures. At the same time, the system has to be reliable and durable enough to last throughout the working day.
In day-to-day situations, the wireless headsets are used to safely expedite transfer of passengers and equipment up and down offshore wind installations. In the engineroom, the headsets provide both a relief from high levels of ambient noise, as well as providing a reliable means of communication topside. The units also come in extremely handy, according to Tidal Transit crews, during man overboard drills when crew can be in instantaneous and direct communication with the skipper, giving him/her directions as to the location of MOB and the state of the casualty once on board. The crisp quality of the transmissions eliminates gray areas or uncertainty in communications.
Recently, while working in fog coming into Great Yarmouth, the headsets came into their own as they allowed deck crew to stand on the bow relaying information to the Master while keeping their arms free to perform other tasks as required. In another instance, an issue with one of the rudders while trying to keep station brought the full value of the wireless system into full perspective. Because of the vessel’s position and the prevailing tidal current, it wasn’t safe for the Master to leave the bridge as the vessel needed to be maneuvered around the turbines. A wireless equipped crewmember was dispatched to investigate and identify the problem. After the deck crew and Master agreed on a solution, the Master was able to tell the crewman if he needed to maneuver the vessel and how, thus affording the crewman the opportunity to take up a safe position away from the moving rudder/machinery. While this occurring, the crewman could relay back to the skipper any issues that he could see that could cause further complications.

Workboats & Wind
The call for reliable and safe communications at sea, especially on small workboat platforms, is a lot more than just hot air. As the North American wind farm market slowly ramps up and promises to provide new opportunities, new fit-for-purpose craft will be built for this sector. As tidal Transit has already found out, wireless communications systems should be standard issue when they do. That’s because this is one place where utility, functionality and safety will all come together to pay handsome backend dividends in a workboat environment that, as yet, does not yet exist in domestic waters. When it does come, U.S.-based David Clark Company will be more than ready to serve a Jones Act restricted market with American built goods. 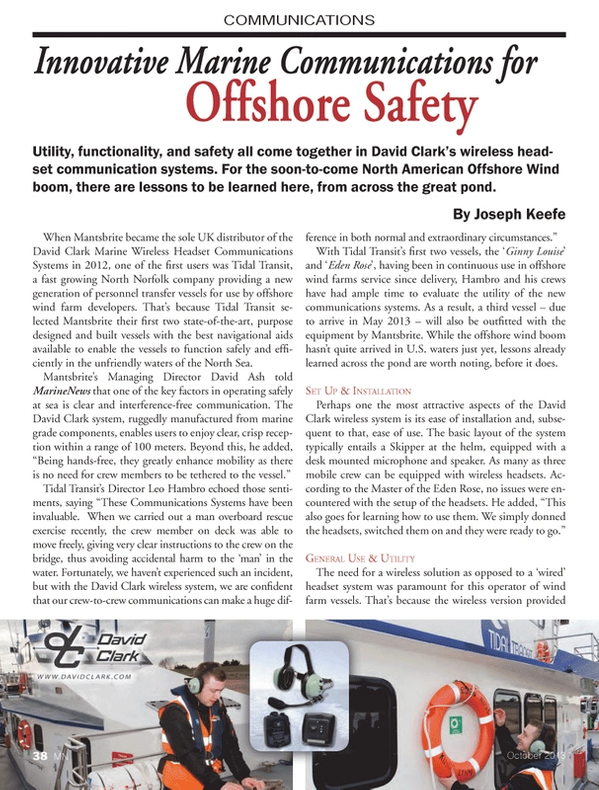