Better communication and hearing protection in the maritime environment through wireless headsets.

Clear communication is essential for a safe, effective and productive workplace. Too often, however, excessive levels of background noise make communication difficult. An estimated 22 million Americans are exposed to hazardous levels of workplace noise each year — four million are exposed every day.  If you work in the maritime environment, you are likely among those four million. It has long been known that marine vessels are noisy places, and studies have demonstrated a clear correlation between long-term assignment aboard Navy ships and an increased rate of hearing loss.

Too Much Noise
Prolonged exposure to excessive noise leads to a condition known as “noise-induced hearing loss” (NIHL), the most common work-related illness in the United States. NIHL is hard to detect because it develops, in Coast Guard terminology, by the “three Ps”: painlessly, progressively and permanently.  Once hearing has been lost, there is no way to reverse the damage.
Excessive noise has been linked to other ill effects, including tinnitus (ringing in the ears), high blood pressure, headaches, muscle tension, ulcers and poor job performance.  Maritime studies have linked constant noise exposure to aggressive behavior and sleep disturbances. High noise levels aboard ship also interfere with the audibility of speech and warning signals, both of which impair safety. Noisy work environments pose an even bigger problem: how to protect workers from NIHL while simultaneously enabling them to talk with each other on the job. Earmuffs may guard against hearing loss, but make it even harder for workers to hear each other. Walkie-talkies enable direct communication but do nothing to protect hearing and also require a free hand for operation. Hand signals require line-of-sight visibility and can be misinterpreted.
Studies have shown that 80 percent of maritime accidents are due to human error, not equipment failure. Safety specialist Gordon Dupont has noted that one of the most common human errors is “lack of communication.” If workers cannot exchange information, the stage is rigged for an accident. Excessive noise greatly interferes with that exchange.

How Loud are Workboats?
The “excessiveness” of noise exposure depends on the intensity of the noise as measured in decibels (dB) and the length of the exposure. OSHA requires workers to wear hearing protection when exposed to an average of 85 dB over an eight-hour period, the threshold at which hearing damage begins to occur. The American Bureau of Shipping and the International Maritime Organization have issued similar guidelines.
How does the 85 dB “threshold” translate into the maritime environment? The short answer is that noise is a significant stressor on board ships. Crew quarters are often in close proximity to the propulsion mechanism, which creates issues with both noise and vibration. Studies have recorded noise levels as high as 120 dB in the engine room and ventilation system, which exceeds the human pain threshold. Other data show that 55-60 meter trawlers generate average noise levels of 85 dB over a 14-day trip. By comparison, a ticking watch emits 20 dB; normal conversation, 50 dB; a motorcycle, 100 dB; and a jet takeoff from 75 feet away, 150 dB. Sounds over 150 dB will rupture the eardrum.  The decibel scale is logarithmic, so sound exposure escalates quickly. Every increase of 3 dB cuts the allowable exposure time in half, and each increase of 10 dB doubles the perceived intensity of sound. Using OSHA’s limit of 85 dB per eight-hour day as a benchmark, exposure to 100 dB of noise for more than 15 minutes would trigger the need for hearing protection.

Wireless Communication Headsets: Mobility and Situational Awareness in One
While hearing protection and clear communication might seem to be at odds, wireless communication headsets are an excellent way to bridge the gap (Figure 1). Wireless headsets can reduce background noise by 20 decibels or more and allow all crew members to communicate clearly. Headsets fit over the ear for hearing protection and are outfitted with a boom microphone and ear speakers to allow hands-free voice transmission and reception through a mobile base station. In some systems, the local headset network can be connected to a land-based operator via a two-way radio.
The premise of a wireless headset system is simple: everyone can hear and be heard, and no one is exposed to potentially harmful levels of noise. This allows all crew members to maintain complete situational awareness: the ability to stay in constant contact on the water, talk in normal voices without shouting or gesturing and provide real-time verbal warnings in dangerous situations. Situational awareness also means greater productivity and efficiency. By removing the barriers to good communication, wireless headsets allow everyone to get more done in less time.
Wireless headset systems offer one other important benefit for maritime workers: mobility. Unlike hardwired systems, wireless systems avoid the need to “plug in” to a stationary audio jack. Workers can move freely about the boat without being tethered to a particular location. And because wireless headsets operate hands-free, there’s no need to hold a microphone or fumble with push-to-talk buttons. Communication is continuous, convenient and conversational.

Choosing a Wireless System
Wireless headset systems are available in a variety of configurations and price ranges. Before you purchase, make sure the wireless system is truly wireless. Some so-called “wireless” systems actually require a cord from the headset to a belt station, creating the danger of entanglement. Moreover, wires are usually the weakest part of any system due to corrosion and breakage.
Depending on the number of headsets you need to connect, wireless systems can run from several hundred dollars to several thousand dollars. Professional-grade systems may cost a bit more up front, but will save you money in the long run through better reliability, fewer repairs and greater longevity.
Overall, wireless headset systems simply provide a better, more productive and less stressful user experience. Shouting, waving and straining to hear over background noise is exhausting. By simultaneously removing the effects of harmful background noise and creating an environment in which normal conversation can take place, wireless headsets offer the best of both worlds: hearing protection and communication clarity. They could even save a life. 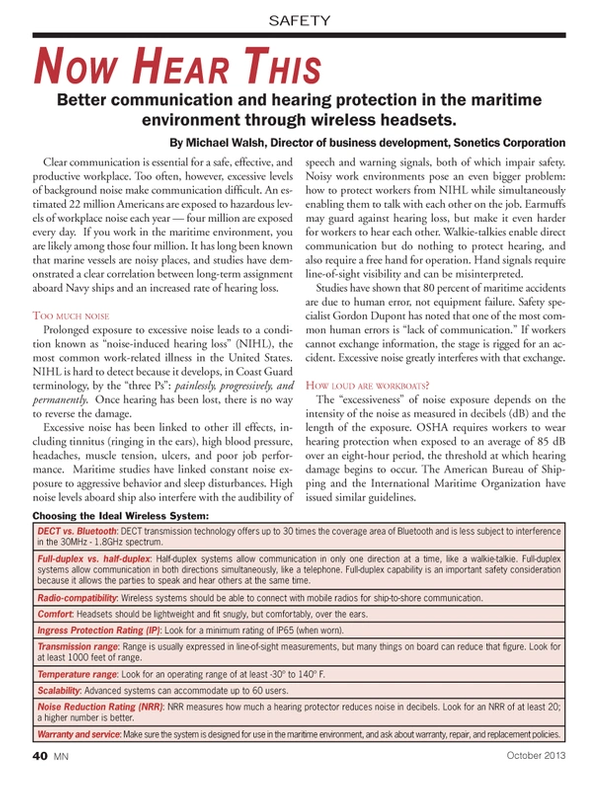