Vessel operators have an additional tool in their arsenal for preventing oil spills during bunkering operations.

“Bunkering Best Practices: Protecting People and the Environment” is a free, 14-minute training video that demonstrates bunkering best practices applicable to the North American West Coast. That said; any marine operator – located anywhere on the globe – can glean valuable ‘take-aways’ from this video. The states of Alaska, California, Hawaii, Oregon and Washington, and the province of British Columbia collaborated on the project with support from the Pacific States/British Columbia Oil Spill Task Force (Task Force). An additional section addresses state-specific regulations for Washington and California.
The idea for this training tool first emerged following a bunkering accident that occurred in California in 2009. The oil tanker Dubai Star released 400 gallons of Heavy Fuel Oil during bunkering while anchored in San Francisco and Alameda. After remaining offshore temporarily, the oil moved east and washed up on the shorelines of Alameda and Bay Farms Islands, contaminating more than 200 acres of rocky intertidal, sandy beach, saltmarsh/tidal flats, and eelgrass habitat. An estimated 186 birds died during the incident and closures at Crown Beach lasted 25 days. Portions of Alameda and Bay Farm Islands were closed to fishing for nearly a month. Vessel operations were also affected in the area during the cleanup operation.
As a result of this spill, the California’s Office of Oil Spill Prevention and Response engaged its five Harbor Safety Committees to develop best practices for bunkering operations. The project evolved into “Bunkering Best Practices: Protecting People and the Environment” which can be viewed online or downloaded – FREE – at: http://oilspilltaskforce.org/ourwork/bunkering-video/
“This video along with our current oil transport tracking project, are some examples of the important work that the Task Force states collaborate on to ensure oil spill policies and best practices are consistent throughout the Pacific Coast states and British Columbia. The benefit of the Task Force is to share resources so not to duplicate or reinvent efforts,” said Sarah Brace, Executive Coordinator of the Task Force.
Through a memorandum signed by the governors of Alaska, Washington, Oregon, and California, and the premier of British Columbia, the Task Force was formed in 1989. Hawaii joined in 2001. The non-profit organization focuses on working with member jurisdictions and stakeholders in planning, policy and outreach in spill prevention, preparedness and response. To learn more about the Pacific States/British Columbia Oil Spill Task Force, please visit http://oilspilltaskforce.org/ 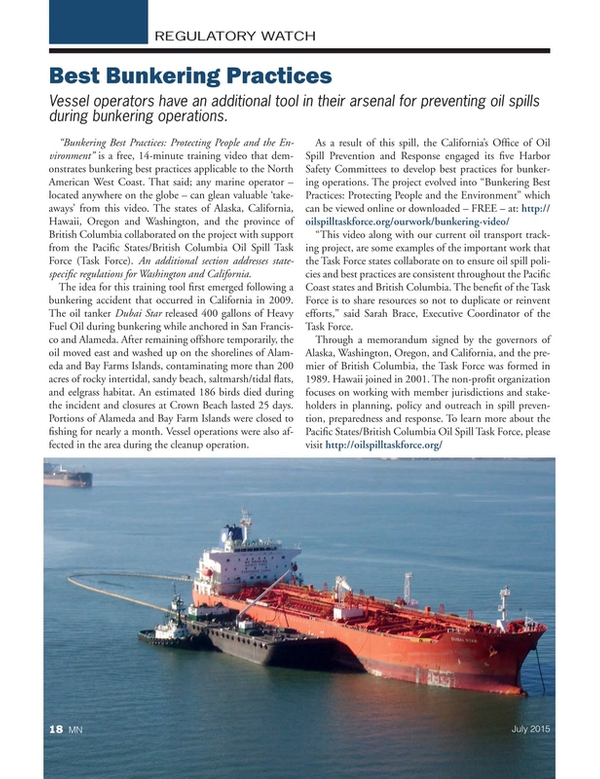