Installed and on the water, Yanmar’s 6AYA-ET engines are already providing value on the U.S. Gulf Coast. This fully mechanical engine is anything but low-tech.

More than 60 years of worldwide experience plus an engine designed specifically for the United States market has made a winning combination for YANMAR’s new EPA compliant commercial engine application. The Push boat Sherry L, owned by E Squared Marine Services, LLC from Texas and repowered by Laborde Products, now operates even more quietly and with better fuel consumption thanks to its new 6AYAM-ET engines. That’s only part of the story, however.
With a need for 24 hours of continuous operation each day pushing inland barges from Channelview to Galveston and on Gulf intercoastal waterways, the Sherry L can’t afford to take a day off. Thanks to its new 755 mhp engine equipped with SmartAssist, it won’t have to. YANMAR’s unique SmartAssist (SA-R) technology allows the engine to be monitored remotely to ensure ideal operating conditions. And, when it’s time for maintenance, the system will send out a reminder, so that maintenance can be completed on the boat’s schedule to make sure it stays in operation the maximum amount of time possible.
The 61’ Sherry L is a twin screw steel Push Boat of 152 DWT built by A&B Industries of Morgan City. The installation of the 6AYAM-ET engines was an easy repower reset with a propulsion package that kept the existing set of TwinDisc marine gears MG517DC ratio 5.03, as well as existing shafts and propellers.
While the engine is still in its first trial year, the pushboat, according to Yanmar and its customer, has been performing remarkably. Tommy Echols, co-owner of E Squared, told MarineNews, “These engines perform better than expected, while also offering quieter operation than the units they replaced and over any other engine I have ever installed in a tug. The fuel consumption is also exceeding expectations, especially for the engine’s horsepower range.”
The repower job took place in September 2014 and the boat has since recorded hundreds of running hours, with no problems. Beyond this, and just as importantly, the twin 6AYA-ET engines, representing Yanmar’s new EPA Tier 3 entry, are mechanical engines that are now available for purchase, with the help of Yanmar distributor Laborde Products. As MarineNews went to print, Yanmar was preparing for another 6AYA-ET installation on a tugboat in the port of Savannah, GA. So far; so good.

Tracking Performance & Parameters
Since installation, YANMAR has been tracking the engine’s operating condition using SA-R, as well as visiting the vessel periodically to confirm the engine and SA-R are working correctly. During the last visit in May, the engine was performing at or in excess of design parameters. SA-R can track Location (GPS), Engine Speed, Boost Pressure, Exhaust Temperature, Cooling Water Temperature, and Lubrication Oil Temperature/Pressure. And, although SA-R is designed for electronic engines and machines, the 6AYA doesn’t have an ECU. Therefore, YANMAR installed a special interface vox to generate a CAN signal converted from the conventional gauge signal.
The prototype arrangement consists of a conventional harness with instrument panel, and an optional M200C system that converts conventional engine data into CAN bus protocol. The engines installed work with a dual circuit (HT-LT) cooling water system, and are equipped with factory installed air starters.
Yamar’s SA-R collects data based on the parameters every .01 seconds and sends the average for a two minute time period via cellular service to the YANMAR Remote Monitoring Center in Japan. YANMAR Japan analyzes the data, and if a defect or warning is found, YANMAR America is then alerted.

Mechanical, by Design
The fully mechanical 6AYAM-ET is additionally touted by Yanmar as the next workhorse on United States waterways for years to come. That’s because many of the existing pushboats in the US waterways have older 750 or 950 mhp mechanical engines. The 6AYA is arguably the perfect mechanical replacement for the 750 mhp range engines because no other competitor has a 750 mhp mechanical engine – the rest are all electrical. And many owners and crews – E Squared among them – dislike electronic engines because of the specialized knowledge and repair costs associated with them.
On the Yanmar 6AYAM-ET, the control system is simple and easy to use (unlike electronic remote control systems), and in many cases, the previous control system can be used when the engine is replaced. Yanmar says that this translates into lower maintenance costs and easier troubleshooting and repair. The need for a mechanic or engineer with specialized knowledge is lessened and if for some reason an issue arises, the crew can repair the engine themselves. This, says Yanmar, adds up to increased security on the water.
The Yanmar ‘fully mechanical’ engine also allows maintenance tasks to be performed by the vessel’s  engineer with no need to wait for factory personal with electronic diagnostic tools to solve a problem. There’s no need to buy expensive fuel injectors ‘ex factory’ – simply rebuild an injector on board within a short time period and with minimal cost. Installation is equally simple.

Bottom Line Satisfaction
E Squared, a company offering all types of marine transportation in the Gulf Coast, chose Laborde Products, YANMAR’s local distributor, and this particular YANMAR engine not only because it met the stringent EPA Tier III requirements and fit their size and horsepower requirements, but also due to previous good experience working with Laborde. When asked if he would recommend these new engines to others, Echols replied, “Definitely; when these engines are available for mass distribution I will highly recommend them to any company that needs the power these engines produce. They are a great addition to the commercial diesel market since there is no other manufacturer that has this 750-800 mhp rating.” 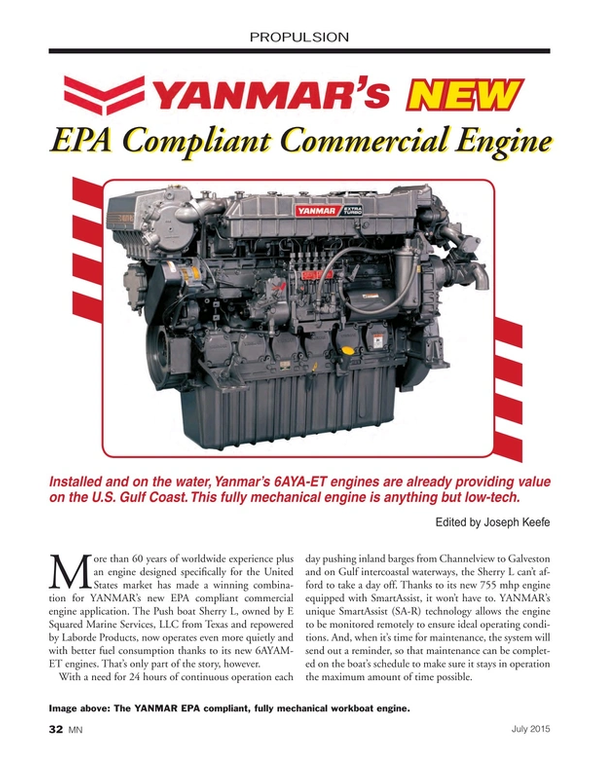