This edition of MarineNews headlines the increasingly diverse articulated tug-barge (AT/B) units which are beginning to make up a large percentage of the domestic merchant fleet. Conventional, less expensive towed barges are much slower than the traditional ships they replaced. That’s one reason that ATB’s are here to stay. The demand for the now familiar AT/B grew out of the need for low cost, safe, reliable, and more rapid marine transportation. That story begins on page 23.
It turns out that safety is important to just about everyone. In the third quarter of 2013, I interviewed Harvey Gulf CEO Shane Guidry for an article that touched upon many things, but also seemed to always come back to one important metric: safety. Guidry insisted, “At our company, there is no budget in our safety department – they get whatever they want. They can make any changes they need to for the betterment of the boat; no matter what the cost or the time involved.”
2013, for the most part, was the epitome of heady times for the offshore industry. The price of crude oil, at times, was hovering just over $110 per barrel and the offshore industry was booming once again, even in the choppy wake of Macondo and the perceived slowness of the federal government to open up more offshore areas for exploration and production. Domestic shipyard backlogs had begun to build again, with many of those hulls just now being delivered. It was an easy time to espouse a robust safety culture, with money to spend and most sectors of the U.S. marine industry firing on all cylinders. That was then; this is now.
As we put this edition of MarineNews to bed, I noted with interest the new program put forth by a prominent underwriter that offers favorable terms for those firms having to “stack” large numbers of their offshore support fleets. Separately, the same oil majors who spent lavish amounts of money to ramp up for the specter of $115 crude oil now spend similar amounts of sweat equity on negotiating discounted rates for charters, services, and equipment. And in that kind of climate, it is easy to see where some might be tempted to cut back on the very line item that probably got them to prosperity in the first place.
The price of oil shouldn’t dictate the level of commitment to safety any more than the economy should dictate the safety of the vehicles we drive to work every day. Shane Guidry’s formula for success in 2013 focused tightly on safety: “It’s my most costly division and there’s no doubt it brings in the most in terms of return.” Hence, treating safety as a profit center has its rewards. Only time will tell if he is right, especially in the current offshore environment. But, safety extends across all maritime business lines, and nowhere is it more important than for the dangerous world of the workboats – and that means OSVs, AT/B’s, tugboats and everything else in between. 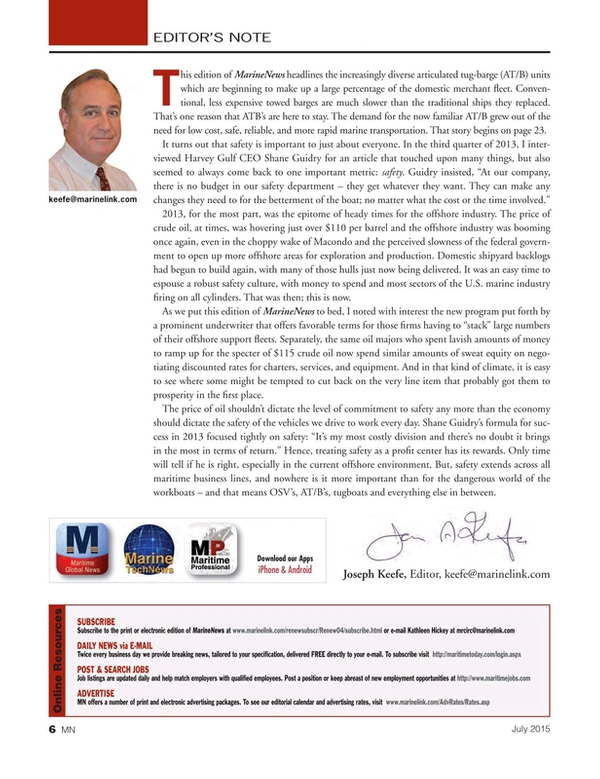