The dirty money can and does wash ashore on the waterfront.

Despite all the jokes about having a washing machine full of soapy hundred dollar bills, the U.S.  Government takes money laundering very, very seriously. Anti-Money Laundering (AML) laws include substantial fines and possible prison time and places the onus for recognizing and reporting money laundering squarely on the shoulders of financial institutions. And yet, we don’t necessarily associate ‘dirty money’ with the mundane world of moving cargo or people from point ‘a’ to point ‘b.’ If so, that’s probably a mistake.
Money laundering, in its simplest form refers to financial transactions designed to hide the true source of money. Generally, the money involved is from an illegal or terrorist source. The end game is to take the “dirty money” and give the appearance of coming from a legitimate source. Tax evasion, health care fraud, drug trafficking, terrorism, and similar illegal activities are the usual well from which these funds are drawn. From the infamous, like Al Capone to the ruthless like Pablo Escobar, to the politically corrupt, money laundering and its consequent tax evasion has been around a long, long time.
Uncle Sam does not like to be cheated out of his tax revenue. The IRS sees to that. Indeed; money laundering is a method for evading taxes that carries high fines and penalties.  In 2012, one bank was alone fined nearly two billion dollars for their part in aiding money laundering by Mexican Drug Cartels. Prior to the U.S. fine, the international arm of the same bank was fined over thirty million dollars for “operational deficiencies” in recognizing and reporting money laundering by its clients. Drop the ball and pay the penalty.

What are we doing to combat money laundering?
The U.S. Government has over the past few decades directly addressed the processes by which money from illegal sources is laundered ... with varying levels of success.
The Bank Secrecy Act of 1970 (BSA) or otherwise known as the Currency and Foreign Transaction Reporting Act requires U.S. financial institutions to assist U.S Government agencies to detect and prevent money laundering. It eliminates all anonymous banking in the United States. A financial institution is required to keep records of cash or negotiable instrument transactions in excess of $10,000.00 per day. If an institution is suspicious that money laundering may be occurring, they must both report it in a Suspicious Activity Report (SAR) and take active steps to stop it.
The reporting requirements are quite onerous. The U.S. Department of the Treasury has a bureau known as the Financial Crimes Enforcement Network (FinCEN) that collects and analyzes these reports to combat illegal financial transactions. Banks are required to file a Currency Transaction Report (CTR) within 15 days on all daily transactions which aggregate to $10,000.00 from one source.
The 1986 Money Laundering Control Act made money laundering a crime in and of itself. Beyond this, the 1994 Money Laundering Suppression Act requires banks to establish their own internal task force and plans to thwart suspicious activities.
The 2001 USA Patriot Act (Uniting and Strengthening America by Providing Appropriate Tools Required to Intercept and Obstruct Terrorism Act of 2001), Title III, strengthened banking rules. Internationally, it expanded bank record keeping and reporting requirements and increased the penalty for currency smuggling and counterfeiting.
The Treasury Department’s Office of Foreign Assets Control (OFAC) lists the names of sanctioned individuals, organizations and countries engaged in international narcotics trafficking, threats to national security, foreign policy or economy of the United States. Not surprisingly, U.S. banks are prohibited from dealing with those named on the list.
As has been proven out by recent headlines, no matter the strength and intent of the law, money laundering remains an international problem exacerbated by domestic and world affairs.

Money Laundering 101
The basic money laundering process has three steps:  Placement, Layering and Integration:
Placement – Money from illegitimate sources is deposited into a bank in an attempt to legitimize the funds. Banks are required to report all transactions which total $10,000 per account per day.  To avoid this red flag, money launderers may raise another red flag by “structuring” their deposits and/or withdrawals to total just under the $10,000 trigger. Structuring is illegal.
Layering – Using various financial transactions to hide the source of money is another tool of the trade.  Moving funds from onshore to offshore or bank to bank, continual withdrawals and deposits, purchases of high-value items like cars, boats, jewels, and precious metals ae designed to change the “form” of money and again hide its source.
Integration – Legitimized money through one or more of the previous steps introduces the laundered money back into the mainstream economy.   This may be from the sale of the high-value items, or capital “investments” in legitimate businesses or more insidiously, sponsoring terrorism.

On the Waterfront
You may be thinking that the marine industry is immune to creating illegal funds in need of washing, but you might be wrong:

As no case is ever the same, determine your best practices regarding money laundering with your legal or bank compliance professional. Be conscientious and careful in your financial and tax related business dealings and reporting and finally, if you want to avoid money laundering completely, remember to take your wallet out of your pants pocket before you wash them.

The Author
Richard J. Paine, Sr. is the National Marine Sales Manager at Signature Financial LLC. He can be reached at rpaine@signatureny.com. 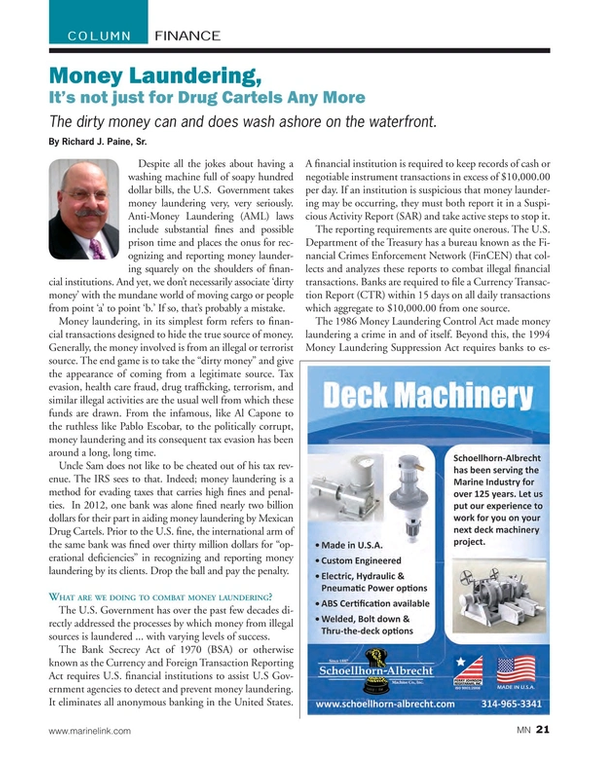