The rapidly changing landscape of crude oil exploration and drilling in the US and Canada, together with economic considerations, logistical issues related to pipeline transport, and the availability of new types of crude oils, including Bakken crude and various forms of bitumen, have resulted in a very sudden and dramatic increase in the transport of crude oil by railroad. “Unit trains” containing 100 or more tank cars are transporting crude oil through regions that have not previously experienced this type of rail transport, and there are significant concerns about safety. The July 2013 crude oil train accident in Lac-Mégantic, Quebec, Canada, which resulted in 47 fatalities (Transportation Safety Board of Canada, 2014) has caused significant concern about the safety of crude-by-rail (CBR) transportation of very volatile Bakken crude in particular.

These changes have had rippling effects in the US and worldwide. Increased production of oil in North America has decreased the need to import oil by tanker. But at the same time, the increase in rail transport has also brought an increase in tank barge, ATB, and smaller tanker traffic in some regions. In places like Washington State and New York, oil is being transferred from rail to tank vessels in the Columbia and Hudson Rivers, and there are plans to increase this traffic with the construction of new terminal facilities. With some of the oil being transported being diluted bitumen, there is concern about the potential for submerged oil that may result from spills from tank vessels or from rail spills into inland waterways.

These unprecedented changes have left federal and state officials scrambling to institute safety and environmental protection regulations to prevent, prepare, and respond to both oil spills and possible fires and explosions. Besides the Lac-Mégantic tragedy, there have been several other derailments of crude oil trains in the last couple of years in both the US and Canada that are making people think that this is happening “all the time” now. There are even website that will give you a map of the “blast zones” in your own neighborhood. But how real is the danger? What do the numbers tell us?

Real Numbers Analyzed
Transporting oil by rail is not an entirely new phenomenon, but in the past, this was mainly limited to occasional tank cars usually carrying refined fuel cargo as part of mixed manifest trains. Each tank car holds about 700 barrels of oil. But this all started to change about five years ago. In 2010, about 55,000 barrels of crude oil were being transported by rail daily in the US – less than one unit train of 100 cars per day. By 2014, more than one million barrels of crude oil were being transported by rail – or about 14 unit trains daily. Most of this traffic was from North Dakota to refineries in the East (New Jersey, Pennsylvania), with some crude oil going also to refineries in Washington and Louisiana. A lesser amount of oil sands crude was coming from Alberta, Canada, to the same locations.

Actually, over the last 35 years or so, the amount of oil being transported that then spilled was decreasing rapidly – in the early 1980s, about one barrel of oil spilled for every 1,000 barrels transported. Over the last decade, there has been a 91% decrease in the spillage rate since the 1980s – so that one barrel spilled for every 12,000 barrels transported. In the last two years, the rate of spillage per oil transported has decreased to one barrel spilled for every 23,000 barrels transported. But, with the dramatic increase in the overall amount of oil transported by rail, the absolute amount of oil spilled each year has increased by 276%. The most likely cause of a major spill from a crude-by-rail (CBR) train is a derailment. Despite the number of news stories on derailments, the frequency (derailments per train mile) for freight trains has actually decreased significantly over the last 40 years, and even in the last decade. This is attributable to safety improvements in rail operations. The number of freight cars that derails in each incident has averaged about eight. (Note: not every car that derails involves spillage – only about 9% of incidents involving hazardous material tank cars results in spillage.)

Bigger Volumes, Bigger Stakes
But, there is a lot more at stake now. In the past, a train derailment that involved spillage of oil might have involved a small amount of oil spilled from a locomotive or a single tank car. Now, with unit trains of 100 to as many as 120 tank cars carrying oil, often volatile Bakken crude, the potential for larger spill volumes has increased, as has the possibility of a fire and/or explosion.

There are not enough data on CBR derailments and spills to analyze the probability of different spill volumes, but analyzing 40 years of freight train derailments gives us a sense of the possible spill scenarios. Evaluating these scenarios is important for response planning purposes. The median case involves about five derailed cars with total spillage of less than one tank car – 700 barrels or so. The 99th percentile case (only 1% incidents would be expected to be larger) involves 37 derailed cars with about 2,400 to 4,400 barrels of spilled oil from three to six cars. The worst case scenario with 122 cars derailing has happened only once in 40 years (and that incident didn’t actually involve CBR tank cars). Theoretically, if this many cars would derail and they were all CBR tank cars, the most that would probably spill would be about 15,000 barrels. However, even one or two tank cars of Bakken crude spilled could result in a significant fire, or possibly an explosion.

Mitigating Risk
The most effective means of risk mitigation is preventing incidents from occurring in the first place. This is exactly what the most recent federal regulations are aiming to do. On May 1, 2015, the Department of Transportation (DOT) issued a final rulemaking “Enhanced Tank Car Standards and Operational Controls for High-Hazard Flammable Trains,” that included a number of provisions aimed at reducing risk from “high-hazard flammable trains” (HHFTs). HFFTs are trains that have a continuous block of 20 or more tank cars loaded with a flammable liquid or 35 or more cares loaded with a flammable dispersed through a train (i.e., with other cargo-type cars interspersed).

The rule contains a new standard for tank cars – the DOT-117 specification. The timeline for retrofitting of affected tank cars for use in North America for high-hazard flammable freight trains (HHFTs), including CBR trains, to be implemented over the course of the next decade. In addition to provisions for tank car standards, this rulemaking also contains regulations regarding enhanced braking, operating speeds, classification of unrefined petroleum-based products, rail routing risk assessments, and rail routing information access. Positive train control (PTC), an advanced automated train protection systems will be mandated for all railroads by the end of 2015.

In addition to these measures, the National Transportation Safety Board recommended thermal protection systems for tank cars, which would reduce the heat flux to tank car containers when exposed to fire. Another prevention measure that is being implemented is the conditioning of Bakken crude in the North Dakota oil fields to reduce its volatility. This change has already paid off after a CBR derailment incident in West Virginia in which the derailed cars burned but did not explode, which prevented further damage.

While prevention measures are being implemented, the other part of risk mitigation – response – is also being addressed in affected areas. There are clearly more challenges that face states and local communities, as well as railroads, for increasing emergency and spill preparedness. Again, flammability of Bakken and related crude oils is an important consideration, but the locations of CBR rail lines are also important.

In some cases the remoteness and inaccessibility of the tracks impedes response actions; in other cases, the tracks being in the vicinity of highly-populated areas is a major safety concern.

Dagmar Schmidt Etkin  has 30 years of experience in environmental analysis — 14 years investigating issues in population biology and ecological systems, and 16 years specializing in the analysis of oil spills. She has earned a Ph.D. from Harvard University, Organismic & Evolutionary Biology (ecology, statistics, population modeling), 1982, a Masters degree from Harvard University (Biology), and a B.A. from the University of Rochester in 1977.

(As published in the September 2015 edition of Marine News - http://magazines.marinelink.com/Magazines/MaritimeNews) 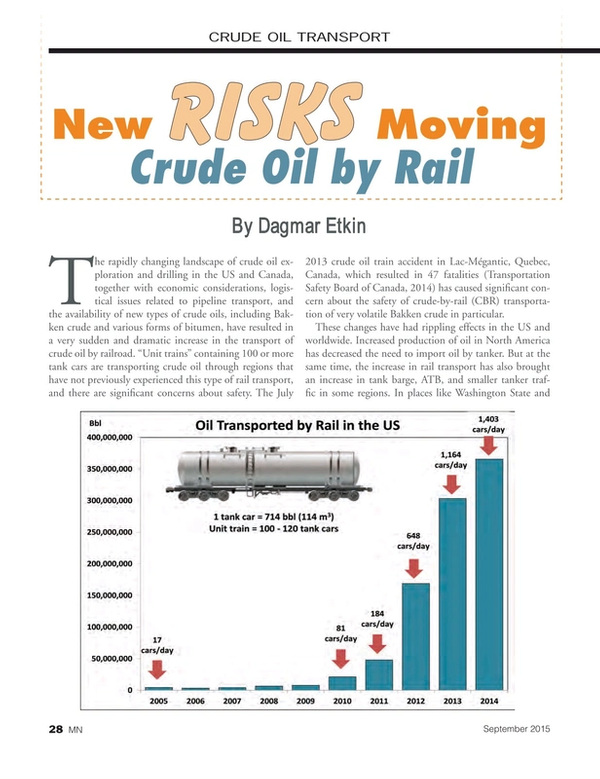