'A Few Good Men' Thanks for the Leadership!

Change is inevitable, especially in Washington, DC, and particularly within the U.S. Army Corps of Engineers. Waterways Council, Inc. (WCI) is a strong partner with the Corps, as navigation is a critical business line within its Civil Works’ mission.

Over the last year, we have seen some of the Corps’ best and brightest officers and civilians retire after decades of service to the Army, to the Corps of Engineers, to the inland navigation industry and of course, to the nation. And while they have been succeeded by a new crop of dedicated, seasoned leaders who will continue to serve as reliable partners, WCI will miss what these stalwarts brought to the collective table to maintain and modernize our inland waterways system.

Last August (2015), Major General John W. Peabody, Deputy Commanding General for Civil and Emergency Operations, retired after a career that spanned more than 35 years in numerous leadership positions including the Corps’ Pacific Ocean Division, Great Lakes and Ohio River Division, and the Mississippi Valley Division, and as Executive Director of the Inland Waterways Users Board.

In an article in WCI’s newsletter Capitol Currents written just after his retirement, General Peabody noted that within the Corps, “the most notable area of improvement is in Planning, where we have nearly tripled our rate of study completion over the last three years. In the navigation program unscheduled lock outages have been declining in number and duration for the last few years, due in part to a more focused risk reduction performance metric instituted in 2013.”

General Peabody was succeeded by MG Ed Jackson, PE, who came to Corps’ headquarters after serving in a variety of command assignments that included Commanding General (Forward) of the Corps of Engineers’ Transatlantic Division in Kabul, Afghanistan for Operation Enduring Freedom. He was also Commanding General of the Corps’ South Atlantic Division in Atlanta, the Commander and District Engineer of the Little Rock District, and Commander of the 54th Engineer Battalion (Mechanized) for Operation Iraqi Freedom among many impressive command assignments.

In speaking to WCI’s Board of Directors and 2016 Washington Meeting attendees last March, General Jackson said that he was committed to delivering on Corps’ commitments, to strategic engagement, to continuing the Corps’ Civil Works Transformation, and to managing transitions, noting, “The nation’s security depends on its economic strength, and its economic strength depends on its infrastructure.”

Last May, Lieutenant General Thomas P. Bostick retired as the Corps’ Chief of Engineers after serving the U.S. Army for 38 years. In this role, he served as the senior military officer overseeing most of the nation’s civil works infrastructure and military construction, and was responsible for more than 37,000 civilian employees and 600 military personnel who provided project management and construction support to 250 Army and Air Force installations in more than 100 countries around the world. Prior to his work with the Corps, LTG Bostick served as Deputy Chief of Staff, G-1, Personnel, U.S. Army, responsible for developing, managing, and executing manpower and personnel plans, programs, and policies for the Army. General Bostick also served in a variety of command and staff assignments both in the Continental United States and overseas.

Proud of many things during his career with the Corps, upon retirement, General Bostick noted that “Our efforts to educate stakeholders, including Congress and the Office of Management and Budget (OMB), are paying off. President Obama, Vice President Biden and members of Congress are now talking more about our infrastructure due to our efforts to educate leaders about our pressing water resources needs.”

General Semonite, in a series of “On the Road Again” YouTube videos at various Corps’ lock projects, said, “Technology reaps innovation and that is what the Corps is going to do.  We have to continue to deliver on time – we are Building Strong and we are going to finish strong!”

On August 3, Steven L. Stockton, P.E., SES, retired as Director of Civil Works for the Corps, the highest civilian position in the agency. He served more than 45 years in service to the Federal government, 41 years with the Corps of Engineers.  Steve had been extremely generous with his time to industry over his career and his wise counsel will be sorely missed by many.

As Mr. Stockton’s successor, we welcome James Dalton, who is serving as the Acting Director of Civil Works.  Before this, he served as Chief of the Engineering and Construction (E&C) Division and was responsible for policy, program, and technical expertise in the execution of multi-billion dollars of design and construction programs for the U.S. Army, U.S. Air Force, Department of Defense, other Federal agencies, and over 60 foreign nations.  He also served as the Corps’ South Atlantic Division Regional Integration Team (RIT) team leader, the South Pacific Division RIT Leader, the USACE Climate Change Adaption Committee Chair, and the lead for USACE on Resilience.

Our country is stronger for having all of these distinguished gentlemen serve the U.S. Army and the U.S. Army Corps of Engineers.  Our waterways – and all that they bring to the United States – will continue to support commerce and all their beneficiaries under the direction of these fine Corps leaders.

A grateful and strong nation thanks them all.

(As published in the September 2016 edition of Marine News) 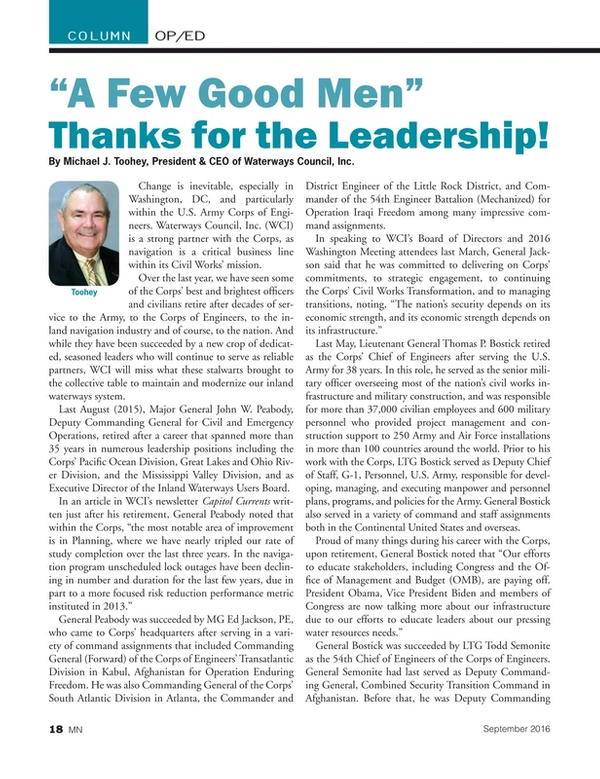 Read 'A Few Good Men' Thanks for the Leadership! in Pdf, Flash or Html5 edition of September 2016 Marine News