There is no more economically and environmentally efficient way of transporting the world’s goods than by sea. Compared to air or road freight, based on per ton of cargo shipped, shipping’s carbon footprint is small. Yet with the 60,000 or so ships that transport 80 percent of the world’s goods emitting about 1.12bn tons of CO2 each year, almost 4.5 percent of all global greenhouse gas emissions, it is unequivocal that we need a viable way of reducing our environment impact. As other sectors reduce their carbon footprint shipping’s is likely to increase as an overall percentage.

The wider take up of liquid natural gas LNG as a marine fuel, however, is not the answer to meeting the great energy challenge that shipping and indeed other industrial sectors face. This is principally because in its unburned state, LNG is methane gas – a GHG with a global warming potential much higher than CO2. The slightest slip or leakage should be a real concern.

For example, almost twice as much LNG must be used to get the same energy output as heavy fuel oil. LNG has an energy density of about 22.5J/liter while fuel oil has an energy density of 40J/liter, therefore to produce the same amount of energy you need to burn almost twice as much (by volume) LNG. Then you have the problem of methane slippage, fuel passing through the engine unburned, and released to atmosphere.

Indeed, this is something Stamford University researchers confirmed last month. “Even small leaks from natural gas wells can create large climate concerns because methane is a potent greenhouse gas – it’s about 30 times more effective at trapping solar heat than carbon dioxide over a 100-year period,” the researchers reported. UCI and Stanford also concluded in 2014 that natural gas does not significantly lower greenhouse gas emissions, even if no methane leaks during production and shipping.

What I find interesting, is that we have eliminated the problem of CFC-based refrigerants and are looking at restricting the use of HCFCs, so why are some quarters, particularly Class, keen to use another aggressive GHG in even greater volume. We cannot risk adding an additional source of methane emissions to atmosphere when there is already a possible thawing of the Siberian permafrost. Releasing more methane to atmosphere could result in a positive feedback loop.

LNG fuel proponents are keen to emphasize the 70 percent reduction in emissions burning LNG as a marine fuel could bring, and if there was no possibility of methane slip, then this would be a very attractive proposition. By mass, LNG contains less carbon than heavy fuel oil (but only about 20 percent maximum). But much of the improved energy efficiency and emissions is afforded by the technical advancements made by the builders of marine engines and exhaust treatment technologies irrespective of the fuel used.

It is true that the ability of marine engines to effectively burn LNG more completely has improved resulting in less ‘slip’, and this is to be welcomed. What cannot be avoided are the operational situations that require venting LNG to atmosphere for the safety of both man and machinery.

Continued improvements in combustion efficiency could see emissions targets met with the use of existing fuels. Engine technology has advanced since the 1940s and 1950s, when residual fuel was pioneered as a fuel for use in diesel engines, and marine engineers have worked hard to improve efficiency as fuel changes. For instance, the residual fuel oil of the early days bears little or no resemblance to the more complex residual fuel currently in use: today’s fuel requires a greater amount of pre-treatment which is achieved in the complex machinery now being used.

This is not a Luddite reaction to progress, but a recognition that marine engineers are capable of a more effective change. We will be better off looking at technology that allows for the continued use of HFO or MDO/MGO until cost-effective fuel cell technologies have been developed.

The continued use of existing fuels, rather than the adoption of LNG, will have another benefit from a GHG perspective. With the refining process what goes in must come out, otherwise a refinery will eventually effectively become clogged. The processes currently used produce the spread of products we see today, including fuel oil. If the market for fuel oil disappears then the refiners are left with the issue of what to do with the residual stream produced during the crude oil refining process. It will have to be processed somehow. This will undoubtedly require energy resulting in the production of CO2 and therefore additional GHG.

Unfortunately, the LNG myth has progressed unchecked with very few challenging those lobbying for a wider take up of LNG. I certainly think that if there is now a change of heart in the U.S. power sector about converting coal-fired plants to run on LNG, then the shipping industry should not be quick to accept that this ‘cleaner’ fuel is a panacea to meeting its emissions reduction requirements.

LNG has a limited effect on the reduction of CO2 and the risks of its rollout to the entire fleet are unacceptable. Rather than spend millions of dollars and man hours working on a solution that barely scratches the surface of the problem, more time, money and effort would be better spent on seeking a truly effective solution to the emission of GHG.


The Author
Ian Adams, FIMarEST, is the Chief Executive of Association of Bulk Terminal Operators (ABTO) and the former CEO of the International Bunker Industry Association (IBIA). These are his opinions alone and furthermore may not necessarily reflect that of Marine News and/or its publishers.


(As published in the December 2016 edition of Marine News) 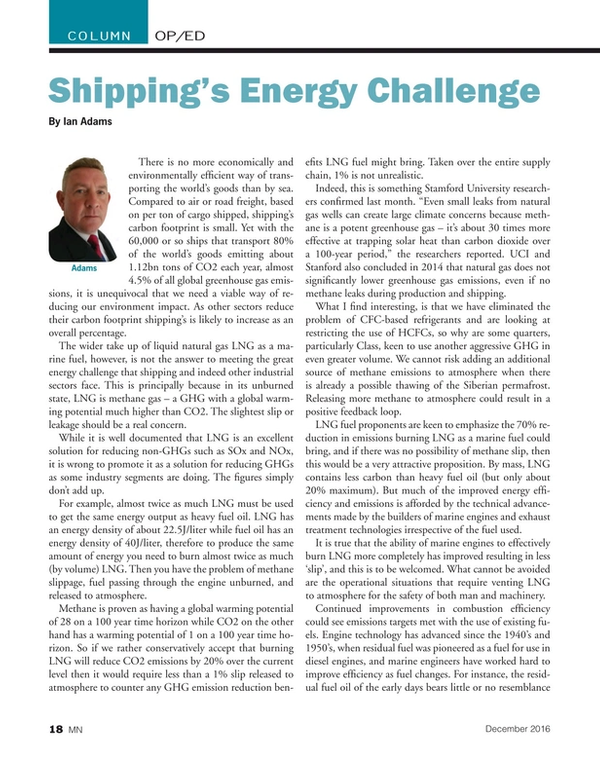