Op/Ed: Continuous Improvement for the US Salvage Indsutry

Professional salvors are called in when the ship’s crew is overwhelmed – the last resort to protect lives, minimize environmental impacts and save the ship and cargo. These salvage masters, divers, firefighters, naval architects, heavy lift operators and other salvage team members regularly go into harm’s way and consistently perform incredible feats. They commit their lives and livelihoods to this work. As American Salvage Association (ASA) President, I am extremely honored to represent these professionals – the men and women of the marine salvage industry.

Coast Guard Recognizes Salvage Industry Performance
On April 18, Rear Admiral Anthony “Jack” Vogt, Assistant Commandant for Response Policy, released an update on the status of the most recent U.S. Salvage and Marine Firefighting (SMFF) industry verification initiative. According to the report, the Coast Guard has conducted 58 scenario-based SMFF verifications within the last year across 19 different Captain of the Port Zones, with 16 different vessel owners and operators. To date, all results have been found to be satisfactory and reflect compliance with the Coast Guard’s Salvage and Marine Firefighting regulations.

This latest report from the Coast Guard on the marine salvage industry’s exceptional performance and continued compliance with the regulatory planning standards is a testament to the salvage industry’s dedication and commitment to continuous improvement of the U.S. and international emergency response capabilities. Additionally, this positive Coast Guard report tarnishes the validity of a recent paper by a special interest that the American salvage industry lacks the required capabilities to respond to a marine casualty in U.S. waters within the planning standards.

Of significance, the U.S. salvage industry’s phenomenal response to the historic 2017 hurricane season is another testament of the industry’s capacity – simultaneously salvaging hundreds of ships, barges and boats in multiple locations following three hurricane landfalls, all while continuing to effectively meet the regulatory standards for salvage and marine firefighting.

Salvage Regulatory Oversight In-Perspective
As background, the U.S. marine salvage industry is regularly and thoroughly audited by the U.S. Coast Guard, maritime industry and insurance providers. Prior to the implementation of the U.S. salvage and marine firefighting regulations, hundreds of so-called salvors were listed on Vessel Response Plans. These entities included standalone surveyors with no owned assets and even companies with no salvage and marine firefighting experience.

During the regulatory implementation process, the U.S. Coast Guard reviewed these salvage service providers, ultimately narrowing the field of qualified salvors from hundreds to just four national salvage companies and a handful of regional salvage providers. This “verification” process did not stop there. Salvage and marine firefighting service providers are audited and verified during plan preparation, remote assessment exercises, table-top exercises and full-scale deployment exercises.

Most importantly, on every U.S. marine casualty incident, the salvage company must submit a written salvage plan that is reviewed and approved by Coast Guard master-degreed naval architects and experienced Captains of the Port. In addition, salvage companies are also audited by insurance companies and vessel owners and operators who are ultimately responsible to ensure their Vessel Response Plan is effective and meets regulatory standards. Following implementation of this regime, hundreds of successful salvage and marine firefighting operations have been completed by ASA members.

It should be noted that the salvage and marine firefighting regulatory standards for the desired response timeframes are “planning standards.” In presenting this concept, the preamble to the Coast Guard regulations states: “the specific response times are planning standards based on a set of assumptions made during the development of this regulation. We understand that these assumptions may not exist during an incident.”

To meet these planning standards, the U.S. marine salvage industry has spent millions of dollars to pre-position marine firefighting systems and other salvage equipment, such as dewatering and cargo transfer pumps, around the U.S. and in remote territories to meet these planning timelines. The industry has trained marine firefighters and actively engages with municipal and industrial firefighters to continuously build capacity and partnerships. Additionally, the salvage industry created an innovative network of responders, including vessels of opportunity – a concept supported by the Coast Guard during a Congressional Hearing on the issue in May 2017 – to rapidly address all 19 services required by the regulatory planning standards.

Without a doubt, and in the past 10-years since the publication of the U.S. salvage and marine firefighting regulations, U.S. salvage capacity and capabilities have grown significantly and continue to expand. In sum, the U.S. marine salvage industry has been “verified” to effectively meet the U.S. regulatory planning standards and continues to expand capabilities both domestically and internationally.

Proactive Partnerships, Communications & Training the Next Generation
Building on this record of success, the ASA continues to proactively work with the U.S. Coast Guard and other Federal agencies to meet evolving regulatory standards and achieve operational success. The creation of ASA “quality partnerships” with the Coast Guard, NOAA and other agencies, for example, has improved salvage safety and created a culture of transparency and continuous improvement. The U.S. Navy’s global salvage capability is supported by response contracts with ASA members. Salvors also have agreements with municipal fire departments; for example, the New York City Fire Department and several others municipal firefighters have agreed to work side-by-side with salvors in the event of a vessel fire to achieve their mutual goals.

In addition to working with government leaders, the salvage industry has myriad relationships with maritime and transportation partners to enhance the U.S. salvage capability. As one example, through our agreement with the Association of Diving Contractors International, salvage divers consistently meet or exceed regulatory safety standards. Formal agreements, regular meetings and routine interactions throughout each year ensure the salvage industry remains aligned with regulatory safety standards and best industry practices.

Today, proactive communications during emergency salvage response operations ensure that the right personnel and equipment are deployed to manage the incident. Historically the salvor was often the last response organization to get the call during a marine casualty event. With a proper Vessel Response Plan activation, communications between a vessel in distress and a salvor now begin within an hour and the salvor is then immediately integrated into the Incident Command System structure.

Salvage plans are quickly formulated and submitted for Unified Command approval within the regulatory planning timeframes. These proactive verbal and written communications during an emergency response consistently improve operations and the end result.

When not engaged in salvage operations, ASA members also regularly present salvage courses to Federal, State and local regulatory agencies and port stakeholders. In essence, salvors are training the next generation of Captain of the Ports and responders on how to effectively manage a marine casualty event, promote salvage best practices, and improve safety. These valuable courses have also been sought out internationally. For example, the ASA trained the Panama Canal Authority in salvage response operations during the canal expansion project that led to a formal agreement with the ASA.

In the end, salvors are extremely dedicated, hard-working members of the maritime industry – they will always respond with determination and a vision toward achieving success. As they say in our industry, we will consistently offer our “best endeavors” to save a ship and protect lives and the environment.

The Author
Jim Elliott is President of the American Salvage Association and Chief Operating Officer of the Teichman Group of Companies, including T&T Salvage and T&T Subsea. With three decades of leadership experience in maritime operations, Elliott has served as a senior Coast Guard officer, incident commander, salvage master, commercial diver and project manager on salvage operations from the Equator to the Arctic. He holds a Bachelor of Science in Environment Management, a Master of Environmental Policy, Master of Arts in National Security and Strategic Studies from the U.S. Naval War College and a Master of Business Administration from Middlesex University London.


(As published in the June 2018 edition of Marine News) 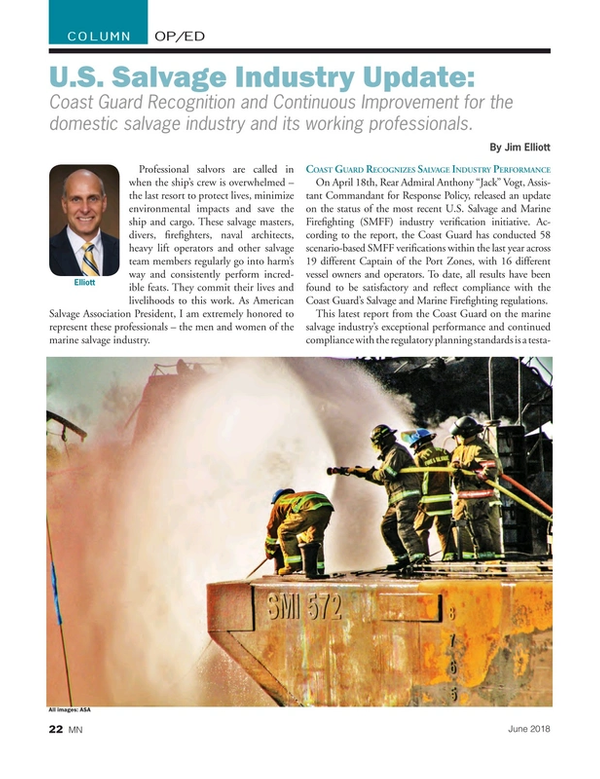 Read Op/Ed: Continuous Improvement for the US Salvage Indsutry in Pdf, Flash or Html5 edition of June 2018 Marine News